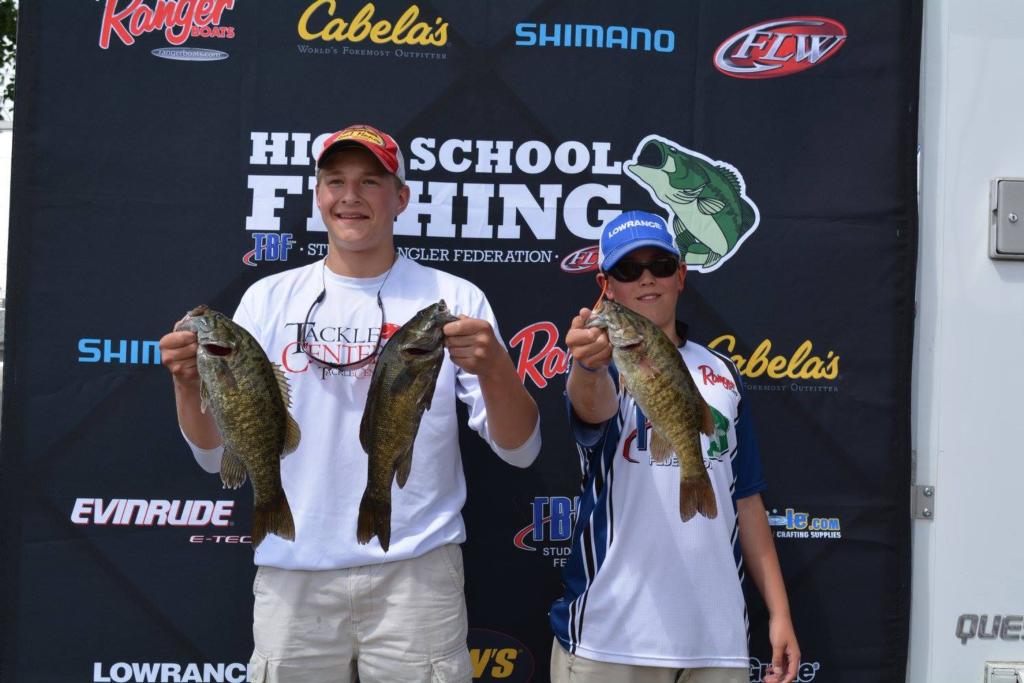 Davenport and Baird said that the key to their win was down-sizing their baits to drop-shot rigs when many competitors stuck to larger topwater baits, jigs and crankbaits.

The top team on Milford Lake that advanced to the Southern Conference Championship was:
1st:       Salina Stix – Nickolas Davenport and Hunter Baird, three bass, 6-7
Rounding out the top five teams were:
2nd:      Kansas Student Angler Federation – Zach Vielhauer and Nathaniel Thompson, two bass, 4-6
3rd:       Hayden High School – Thomas Heinen and Brock Bila, two bass, 4-1
4th:       Kansas Student Angler Federation – Cameron Pappan and Jesse Heflin, two bass, 4-0
5th:       Goddard High School – Brock Miller and Dakota Driskill, two bass, 3-12
Complete results and a photo gallery can be found at HighSchoolFishing.org.
The 2015 Kansas State High School Fishing Championship was a two-person (team) event for students in grades 7-12. The top 10 percent from each TBF/FLW state championship field will advance to a High School Fishing conference championship along with the top three teams from each of the seven TBF/FLW High School Fishing Opens held this season. The top 10 percent of each conference championship field will then advance to the High School Fishing National Championship, coinciding with the TBF National Championship and an FLW Tour stop in the spring of 2016. The High School Fishing national champions will each receive a $5,000 college scholarship to the school of their choice.
In addition to the High School Fishing National Championship, all High School Fishing anglers nationwide automatically qualify for the world’s largest high school bass tournament, the 2015 High School Fishing World Finals, held on Pickwick Lake in Florence, Alabama, on July 8-11. At the 2014 World Finals more than $40,000 in scholarships and prizes were awarded. Visit HighSchoolFishing.org for details.
ABOUT FLW
FLW is the industry’s premier tournament-fishing organization, providing anglers of all skill levels the opportunity to compete for millions in prize money nationwide in 2015 over the course of 240 tournaments across five tournament circuits, four of which provide an avenue to the sport’s richest payday and most coveted championship trophy – the Forrest Wood Cup. FLW tournament fishing can be seen on the Emmy-nominated “FLW" television show and is broadcast to more than 564 million households worldwide, making it the most widely distributed weekly outdoors-sports television show in the world. For more information about FLW visit FLWFishing.com and look for FLW on Twitter, Facebook, Instagram and YouTube.
ABOUT THE BASS FEDERATION
The Bass Federation Inc., (TBF) is a member of the Freshwater Fishing Hall of Fame. TBF is owned by those we serve and dedicated to the sport of fishing. The Federation is the largest and oldest, organized grassroots fishing, youth and conservation organization there is. TBF, our affiliated state federations and their member clubs conduct more than 20,000 events each year and have provided a foundation for the entire bass fishing industry for more than 45 years. TBF founded the Student Angler Federation and the National High School Fishing program in 2008 to promote clean family fun and education through fishing. Visit bassfederation.com or highschoolfishing.org and “LIKE US” on Facebook.
# # #