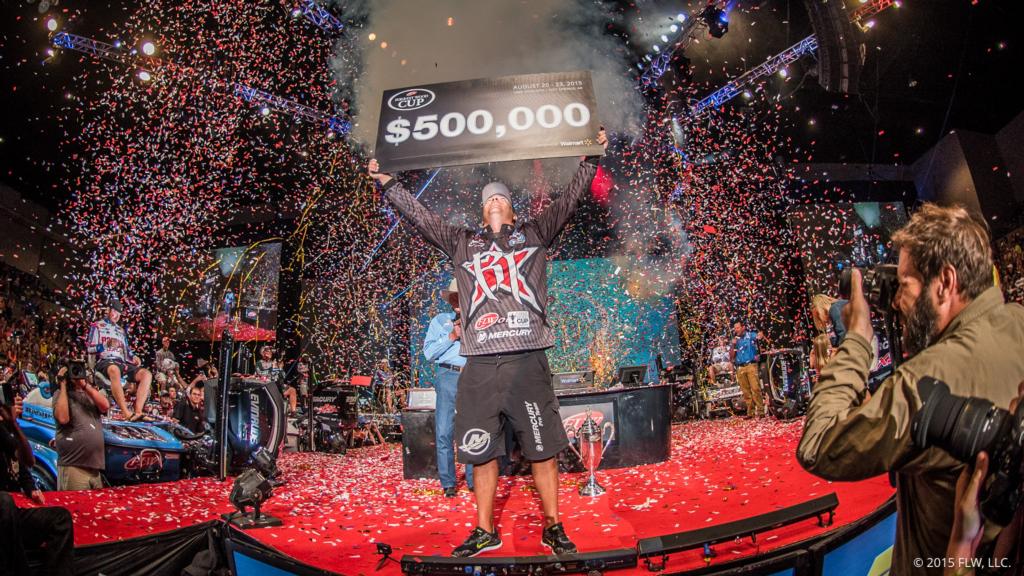 Brad Knight Photo by Garrick Dixon.
August 23, 2015 • MLF • Press Releases
HOT SPRINGS, Ark. – Professional angler Brad Knight of Lancing, Tennessee, crossed the stage with a five-bass limit weighing 11 pounds, 7 ounces Sunday to claim the title of Forrest Wood Cup Champion at the Forrest Wood Cup at Lake Ouachita presented by Walmart. Knight, with a four-day total of 20 bass for 51-12, won by a 3-pound, 15-ounce margin over Ramie Colson Jr., of Cadiz, Kentucky, and won the $500,000 top award in professional bass fishing’s world championship that featured 50 of the best professional anglers in the world casting for the sport’s largest prize.
“This is unbelievable and it still has not sunk in yet,” said Knight, a seven-year veteran of the Walmart FLW Tour who earned the first victory of his career in this championship event. “It is so humbling to add my name to the list of great champions that have won this Cup before. I may never catch another bass again as long as I live, but no matter what happens from here on out, I’ll still be a Forrest Wood Cup champion. To be a part of that club, that is something that nobody can ever take away from me.
“I had such a tough practice,” Knight continued. “We get three days to figure out the lake, and on the second and third day of practice I did not have a single keeper bite. I found an area in the back of Blakely Creek that was the only place that I was confident that I could even get a single bite and that spot turned out to be gold.”
Knight said that the back of the creek had a lot of standing timber and laydowns that he would target each morning with a 6-inch straight-tail worm on a drop-shot rig. As the day progressed, Knight would move out into the main creek and target a deeper creek channel mud flat with a buzzbait. Weather conditions changed on Sunday and Knight said that he made a key adjustment, finding success using a homemade balsa squarebill-crankbait.
“The drop-shot rig was the most consistent each day,” said Knight. “The buzzbait was a big player for me on the first day. Then, today, the wind changed directions and was blowing directly into the creek. It dirtied the water up and the fish got up shallow and were active. I pulled out an old squarebill plug that I hadn’t caught a fish on in five years and that turned out to be my key bait today.”
“When you win a Tour-level tournament, that is a career-changer and a great feather in your cap,” Knight said. “But, when you win the Forrest Wood Cup, that is a life-changer. I’ve got a 3-year-old girl who now has college paid for. I can write a check and pay off my house when I get home. The thoughts that are running through my head right now are how I can best provide for my family. This is just a humbling, humbling experience.”
The top 10 pros finished the tournament in:
1st:          Brad Knight, Lancing, Tenn., 20 bass, 51-12, $500,000
2nd:         Ramie Colson Jr., Cadiz, Ky., 18 bass, 47-13, $60,000
3rd:          Brandon Cobb, Greenwood, S.C., 20 bass, 47-11, $50,000
4th:          Jacob Wheeler, Indianapolis, Ind., 18 bass, 45-13, $37,500
5th:          Scott Martin, Clewiston, Fla., 18 bass, 45-4, $30,000
6th:          Bryan Thrift, Shelby, N.C., 20 bass, 45-0, $24,000
7th:          Larry Nixon, Bee Branch, Ark., 18 bass, 44-10, $23,000
8th:          Zack Birge, Blanchard, Okla., 20 bass, 43-11, $22,000
9th:          Mark Daniels Jr., Tuskegee, Ala., 19 bass, 37-12, $21,000
10th:        Chris Baumgardner, Gastonia, N.C., 16 bass, 37-9, $20,000
A complete list of results can be found at FLWFishing.com.
Overall there were 42 bass weighing 94 pounds, 15 ounces caught by pros Sunday. Five of the final 10 anglers weighed in five-bass limits.
Sunny Hawk of Salt Lake City, Utah, won the co-angler division and $50,000 Friday with a two-day total of eight bass weighing 19 pounds, 11 ounces followed by Bryan New of Belmont, North Carolina, in second place with nine bass weighing 16-6 worth $10,000.
The 2015 Forrest Wood Cup at Lake Ouachita presented by Walmart was hosted by Visit Hot Springs and the Arkansas Department of Parks and Tourism.
FLW and the Huntsville/Madison County Convention and Visitors Bureau announced Saturday that Huntsville, Alabama, will be hosting the 2016 Forrest Wood Cup presented by Walmart, the world championship of bass fishing, Aug. 4-7, 2016, on Wheeler Lake. This event marks the first time that the Forrest Wood Cup, the sport’s richest prize, has visited Wheeler Lake.
Coverage of the Forrest Wood Cup will be broadcast in high-definition (HD) on the NBC Sports Network (NBCSN) when “FLW” airs December 6 from 7 – 8 p.m. ET. The Emmy-nominated "FLW" television show airs on NBCSN, the Pursuit Channel and the World Fishing Network and is broadcast to more than 564 million households worldwide, making it the most widely distributed weekly outdoors-sports television show in the world.
For complete details and updated information visit FLWFishing.com. For regular updates, photos, tournament news and more, follow us on Facebook at Facebook.com/FLWFishing and on Twitter at Twitter.com/FLWFishing.
ABOUT FLW
FLW is the industry’s premier tournament-fishing organization, providing anglers of all skill levels the opportunity to compete for millions in prize money nationwide in 2015 over the course of 240 tournaments across five tournament circuits, four of which provide an avenue to the sport’s richest payday and most coveted championship trophy – the Forrest Wood Cup. FLW tournament fishing can be seen on the Emmy-nominated “FLW" television show and is broadcast to more than 564 million households worldwide, making it the most widely distributed outdoors-sports television show in the world. For more information about FLW visit FLWFishing.com and look for FLW on Twitter, Facebook, Instagram and YouTube.
# # #