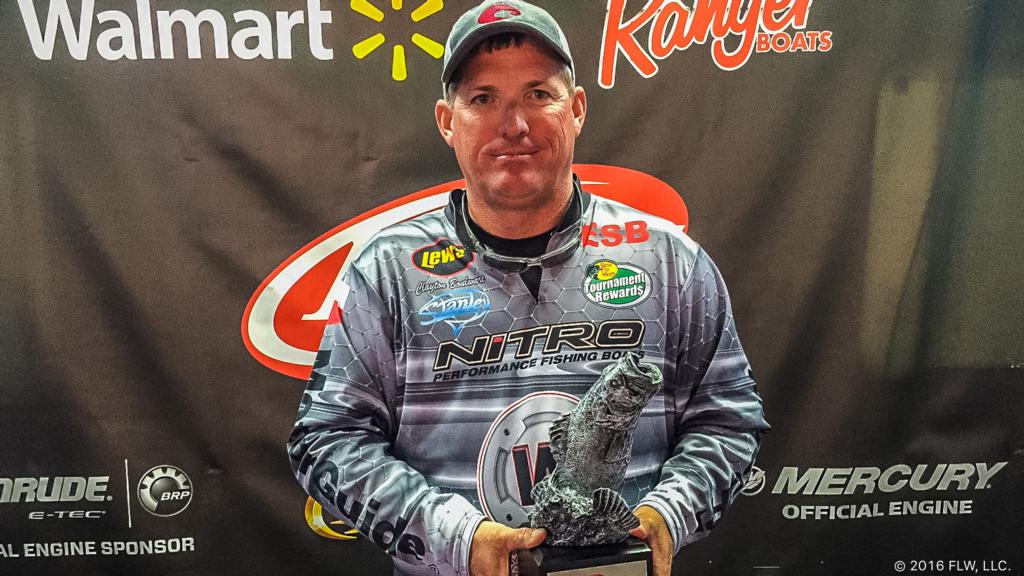 “I ran to a creek bend on the north end of the lake that has a hump with clay and rock on it,” said Boulware, who logged the first BFL win of his career. “That slight elevation is called the ‘sweet spot’ and it’s only a 10- by 10-foot square. The key is to pull in there and see if there’s shad. If they’re there, you’ll likely get a limit within minutes. You have to be quick though, because the bite usually dies off by 8 a.m.”

Boulware said he arrived at the spot around 7:45 a.m. and used a Citrus Shad-colored Bomber Fat Free Shad Crankbait to begin accruing his winning stringer.

“I quickly caught a 5½- and 6-pounder in the sweet spot, all before 8 a.m.,” Boulware said. “The bite slowed around 8:30 so I took out a Texas-rigged, Blue Fleck-colored Big Bite Baits Kriet Tail Worm and boated two 4-pounders by 9.”

With four keepers in the livewell, Boulware said he caught his fifth using a homemade shaky-head jig rigged with a Blue Fleck Big Bite Baits Finesse Worm before the sweet spot went dormant. From there, he ran farther north to try and cull before his day concluded.

“The final area I targeted was a pocket that had some milfoil,” said Boulware. “I caught one more on a white Z-Man ChatterBait and culled, and that’s what I took to the scale. Luckily the five bass I had were enough to win.”

Johnston caught the biggest bass of the tournament in the pro division, a fish weighing 9 pounds, 11 ounces and earned the day’s Boater Big Bass award of $755.

Michael Conaway of Magnolia, Texas, caught the biggest bass of the tournament in the co-angler division, a fish weighing 8 pounds, 12 ounces and earned the day’s Co-angler Big Bass award of $377.