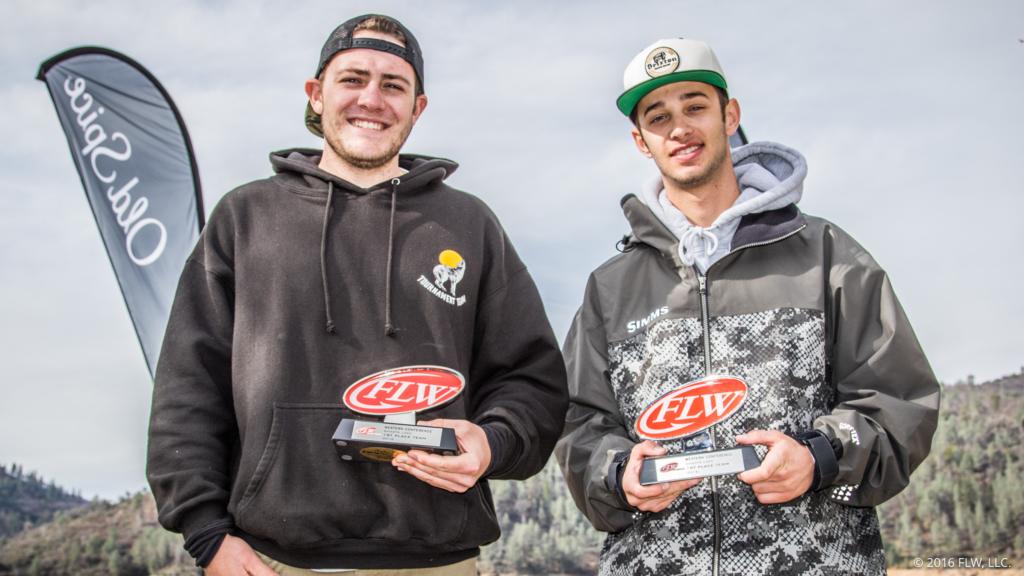 Despite being College Fishing rookies, the Cal Poly squad were very comfortable on the water. Both were accomplished TBF/FLW High School Fishing anglers, Rinauro for Leland High School in San Jose and Pitts for Analy High School in Sebastopol.

“We definitely didn’t expect to get the win this week in our first tournament, but it feels great,” said Rinauro, an agricultural business major. “We’ve been following the Costa Series event all week and knew that the lake was fishing pretty tough. We didn’t find much yesterday in the one day of practice that we had, so to come out and get the win is surprising, but awesome.”

The duo said they keyed in on an area where they found clear water, in the McCloud River arm of Lake Shasta.

“A lot of teams ran up the Sacramento River arm, so we were trying to avoid that and do something different,” Rinauro said. “The water was really muddy, but we found a stretch that had clear water and current.”

Rinauro and Pitts boated a quick limit in the McCloud arm using swimbaits, jigs and shaky-head rigs before leaving to hunt for the big kickers.

“We moved out to the main lake and ended up running a lot, spot to spot,” said Pitts, a construction management major. “We caught 20 to 25 fish throughout the day. Our two big fish (a 4- and 5-pounder) came off of two different points in the main lake.”

“I think the key for us today was that we used larger bait profiles then many of the other teams,” Rinauro went on to say. “We used bigger swimbaits, longer worms and bigger jig trailers and that seemed like the difference for us.”

The top 10 teams that advanced to the 2017 College Fishing National Championship are:

Complete results will be posted at FLWFishing.com.