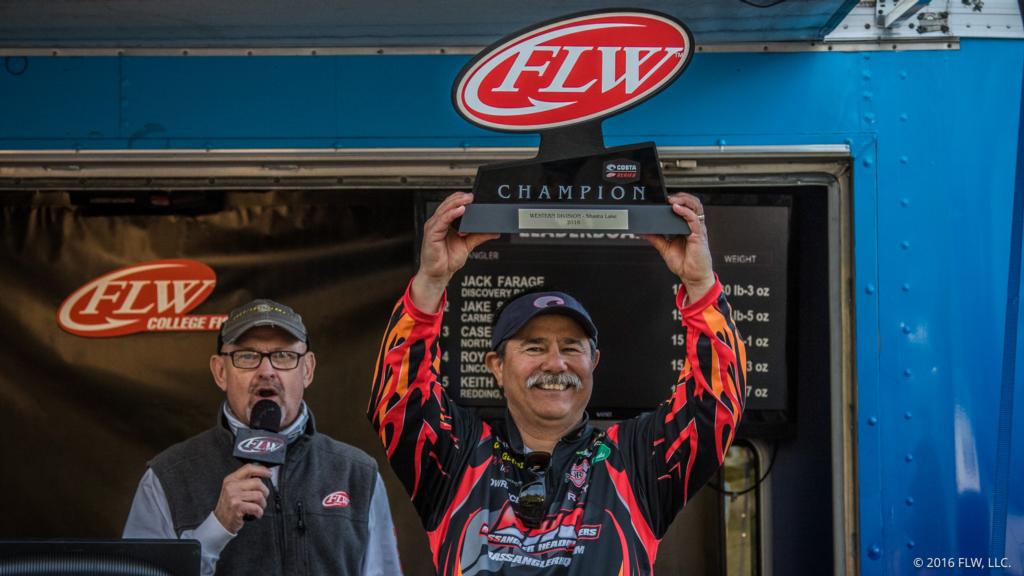 “It feels really good to finally get that monkey off of my back and win an FLW event,” said Gutierrez, who earned his first career FLW Series win. “I’ve won a few different tournaments in my life, and I’ve been close here, but the win has eluded me for a few years. I had a blast this week and could not be happier right now.”

Gutierrez said that he found bigger fish on the main lake in practice and decided to concentrate his efforts throughout the week there. He looked for transition areas, either red clay or chunk rock to gravel. He said he would cover water with a Duo Realis Spinbait 90, targeting shallow points. Once he got bit, he would slow down and thoroughly work the area with a ¼-ounce Frenzy Baits NAIL, a shaky-head rig that Gutierrez designed himself, rigged with a green-pumpkin Reaction Innovations Flirt.

“I weighed in a few fish off of a dart head as well, but the majority of my keepers this week came on the Nail. The bites were very light and subtle. I used the heavy ¼-ounce weight because I wanted to maintain bottom contact as I fished the Nail slowly.

“I’ve really learned over the last few years to trust myself and my decision making,” Gutierrez went on to say. “In years past I may have gotten confused and spun out, but I’ve learned to trust my gut and my decisions and I think that is what earned me the win this week.”

The top 10 pros on Lake Shasta were:

Complete results will be posted at FLWFishing.com.

Smith caught the biggest bass of the tournament in the pro division Thursday, weighing 7 pounds, 2 ounces to earn him the day’s Big Bass award of $250.

Jack Farage of Discovery Bay, California, won the co-angler division and a Ranger Z117 with a 90-horsepower Evinrude or Mercury outboard motor, with a three-day total of 15 bass weighing 30 pounds, 3 ounces.

The top 10 co-anglers on Lake Shasta were:

Dunn caught the biggest bass of the tournament in the co-angler division Thursday, weighing 5 pounds, 13 ounces to earn him the day’s Big Bass award of $166.50.