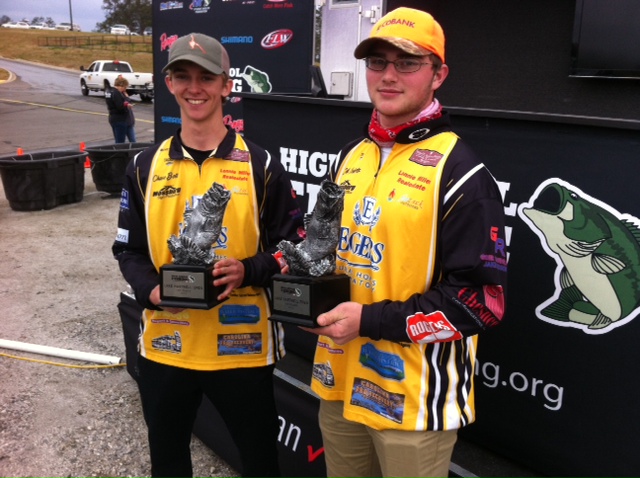 ANDERSON, S.C. – The Chesnee High School duo of Zack Roberts and Chase Botts from Chesnee, South Carolina, brought a five-bass limit to the scale Sunday weighing 17 pounds even to win the 2016 TBF/FLW High School Fishing Carolina Early Bird Open on Lake Hartwell. The win earned the team the title and qualified the team to compete in the High School Fishing Southeastern Conference championship on Lake Cumberland in Somerset, Kentucky on September 16-17.

“I threw a Berkley Bad Shad No. 7 crankbait almost all day,” said Botts, a junior at Chesnee. “I slow-rolled it over the rocks to catch most of my fish.”

Roberts, a senior at Chesnee, used an Alabama Rig, which he also slow-rolled  to catch his fish. “I think we caught seven largemouths and nine or ten stripers, which just kept us hoping.”

When asked what the key to their success the duo said, “Staying focused on the fish we found.”

Seventy-eight teams from four different states competed in the tournament. The Lew’s Big Bass Award was won by the Gilmer High School Club of Grant Ledford and Isaac Colwell with a 5-pound, 9-ounce bass.

The top three teams on Lake Hartwell that advanced to the Southeastern Conference championship were:

ABOUT THE BASS FEDERATION