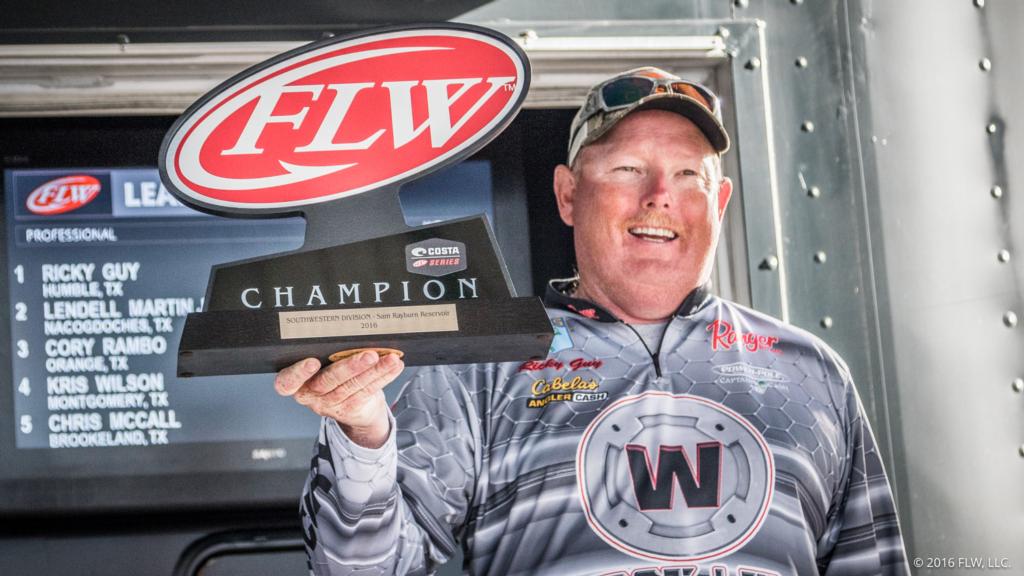 “I’m feeling pretty dang good right now,” said Guy, who earned his first career win in FLW Series competition. “I’ve fished a lot of these tournaments, so to finally come out on top is special. The FLW Series is truly one of the toughest tournament circuits in the country.”

Guy said it was his technique that proved to be most effective in getting bass to bite the Trap.

“You had to be touching the grass with the bait,” said Guy. “It’s a lot of work to run it in all of that grass, but you had to fight through it. If you weren’t touching it, you weren’t going to catch the big ones.”

Guy said he returned to the same areas on day two, but found them overrun with tournament traffic. Confident in a flipping pattern that he had found in practice, the Texas angler made a run to a small area north of the Highway 147 Bridge known as The Canyons.

“I had a small, productive area where I focused on prespawn bass,” said Guy. “I flipped flooded brush that was mixed with Cypress and Willow trees using a black and blue-colored Reaction Innovations Sweet Beaver. I also mixed in a Texas-rigged Strike King Rodent of the same color, but the Beaver ended up being far more productive.”

Guy said his day-two catch was anchored by a 10-pounder that he caught in buck brush around 10:30 a.m.

On day three, Guy said he returned to his original areas from day one, but again didn’t find any action on the Rat-L-Trap. He said he decided to go with what was working and made a run back north to The Canyons and flip for prespawn bass using the same Sweet Beaver presentation.

“I decided I was going to live or die by flipping,” said Guy. “It didn’t get me a lot of bites day on day three, but luckily the five I managed to get in the boat were enough to push me to the top.”

The top 10 pros on Sam Rayburn were:

Gene Eisenmann of Frisco, Texas, caught the biggest bass of the tournament in the pro division Thursday, a brute weighing 10 pounds, 2 ounces that earned him the day’s Big Bass award of $300.

Matt Williams of Nacogdoches, Texas, won the co-angler division and a prize package which includes a Ranger Z117 with a 90-horsepower Mercury outboard motor. Williams earned his win with a three-day total of 15 bass weighing 45 pounds, 15 ounces.

The top 10 co-anglers on Sam Rayburn were:

Michael Haffelder of Pearland, Texas, caught the biggest bass of the tournament in the co-angler division Thursday, a bass weighing 9 pounds, 11 ounces that earned him the day’s Big Bass award of $200.