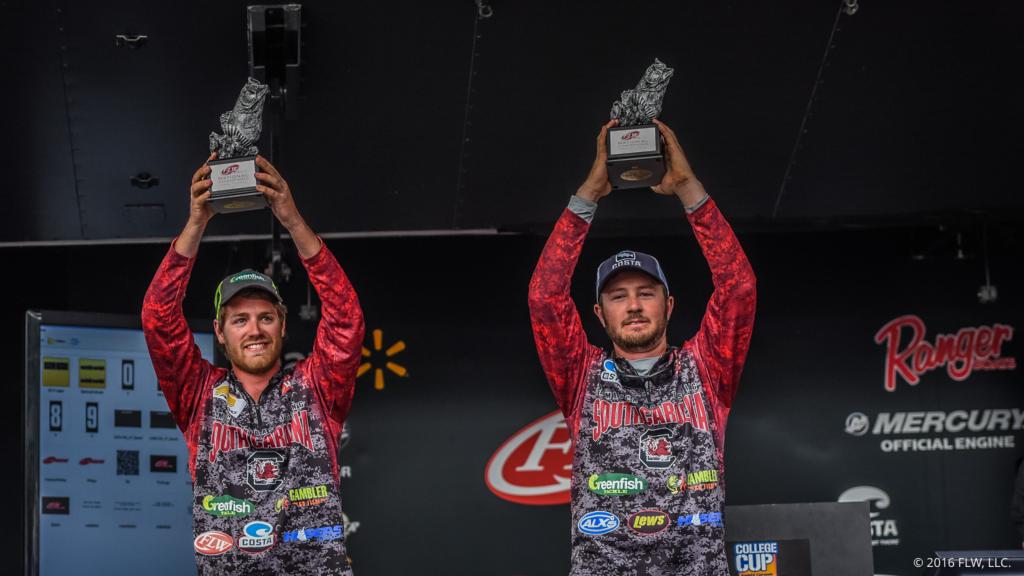 The University of South Carolina became the second club to ever win back-to-back championships in FLW College Fishing competition after Blanchette and Anderson earned the victory to complement last year’s win by the USC squad of Gettys Brannon and Patrick Walters. The University of Florida was the first school to accomplish the feat, winning back-to-back championships in 2009 and 2010.

“We knew we could catch a limit of spotted basss fairly easily, so we went and tried to gamble and catch some largemouths we had found on the beds by casting a weightless [Yamamoto] Senko to them,” Blanchette said. “The first fish we went to had pulled off. We went to another fish, and it had pulled off too.”

Rather than getting spun out, the anglers regrouped and grabbed a relatively easy limit of spots by throwing Senkos around stumps in 5 to 7 feet of water on clay banks. With about 7½ pounds in the boat, Blanchette and Anderson knew it was gut-check time.

“We said, ‘This is not how we’re going to win it,’” Blanchette recounted. “We picked up, ran to the back of a creek and started throwing the Senko. We knew if we kept it in our hand all day we’d get the bites we needed. Sure enough, we sat down on our first spot, and on my second cast, I catch a 4-pounder at 9 o’clock.”

Eventually, they realized that further improvement would require relocation.

“We had about 10 1/2 pounds, but we ran everything in that creek,” Blanchette recalled. “We said, ‘We’ve burnt it up, and we have to make a decision.’”

That decision: Venture up to another cove with habitat similar to what produced. Sounds like basic fishing rotation, but, as Anderson notes, neither angler had been there in several years.

“We knew that area had what we were looking for, so we hunkered down in that cove,” Blanchette said. “We didn’t get a bite in an hour and a half, but we said, ‘The fish to win live here.’

“Sure enough, we were going into the back of this cove and he [Anderson] spots a bed fish out of the corner of his eye that was over 2 pounds,” Blanchette continued. “I caught that fish on a white Zoom Lizard, and as soon as I did, he picked up the unweighted Senko, and two casts later catches one that was over 3.”

That one-two punch sealed the deal.

Anderson says that locating big cruising largemouths to complement their spotted bass pattern was the key to their success. While they did mix in a little bed-fishing action this week, the majority of their fish were caught outside the bedding zone, right on the edge of prespawn staging.

“We’re both conservative fishermen,” Blanchette says. “We just want to go out and catch a solid limit. But we knew this is it – this is the National Championship. We came here to win, not take second or third.

“We knew we had to swing for the fences, and we hit one out of the park.”

For the first time ever in FLW College Fishing competition, the winning duo will compete against each other Sunday day in a one-day fish-off on Lake Russell in Iva, South Carolina, a lake that was undisclosed to the anglers until they were declared champions. The two anglers will weigh in at 4 p.m. prior to the final weigh in of the Walmart FLW Tour event at Lake Hartwell. The team member with the largest one-day stringer will win the ticket to advance to the 2016 Forrest Wood Cup.

Full results and standings can be found at FLWFishing.com.

The FLW College Fishing National Championship, hosted by the Mountain Lakes Convention and Visitors Bureau, awarded the top team a $30,000 prize package, including a Ranger Z175 boat with a 90-horsepower outboard engine and one entry into the 2016 Forrest Wood Cup. The Forrest Wood Cup, the world championship of bass fishing, will be held August 4-7 on Wheeler Lake in Huntsville, Alabama, and will offer a collegiate angler the opportunity to compete for a top award of $300,000.

The South Carolina University team will compete Sunday on Lake Russell out of Sanders Ferry, located at 3611 Elberton Highway, in Iva, South Carolina, launching at 6:30 a.m. EST. They will weigh-in at 4 p.m., prior to the day 4 weigh-in of the FLW Tour event at Green Pond Landing, located at 470 Green Pond Road in Anderson.

Fans will be treated to the FLW Expo on Sunday from noon to 4 p.m. at Green Pond Landing prior to the final weigh-ins. The Expo includes interactive games, activities and giveaways provided by FLW sponsors, and the opportunity to interact with professional anglers to learn more about the sport of fishing and other outdoor activities. All activities are free and open to the public.