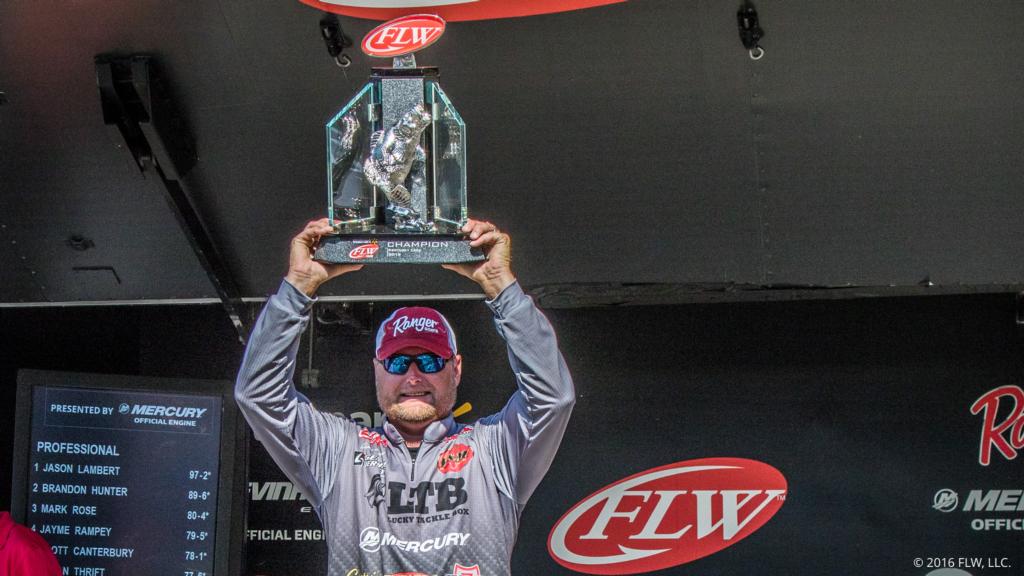 GILBERTSVILLE, Ky. – Pro Jason Lambert of Pickwick Dam, Tennessee, brought a five-bass limit to the scale Sunday weighing 29 pounds even – the heaviest limit ever weighed at Kentucky Lake in FLW Tour competition – to win the Walmart FLW Tour at Kentucky Lake presented by Mercury Marine. Lambert’s four-day total weight of 20 bass for 97-2 gave him the victory by a 7-pound, 12-ounce margin over second place pro Brandon Hunter of Benton, Kentucky, in the tournament that featured 162 of the best professional bass-fishing anglers in the world competing for the top cash award of $125,000.

“Today was one of those days when everything just came together perfect,” said Lambert, the 2014 FLW Tour Rookie of the Year, now in his third season. “I culled two fish that were over 5 pounds today. That has never happened to me before. I’ve said for years, Kentucky Lake is the best ledge-fishing tournament lake in the country. This week has been magical.”

Lambert said that his key bait on the first two days of competition was a Castaic Heavy Metal Flutter Spoon, but he also caught a couple of largemouth on a V&M J-Mag Worm. He made what he called a tactical decision and switched to a 7-inch green shad-colored Castaic Jerky J Swimbait to catch most of his fish on the final two days of competition.

“I really figured out a cadence – the right speed and the depth range to run it in,” Lambert continued. “But, if there was a key for me this week, it was my Garmin electronics.”

Lambert said that he had around 60 different schools of fish marked on a 75-mile run down the Tennessee River from Kentucky Dam, and that the schools got bigger as the tournament progressed.

“There is so many fish in this entire lake, you can fish everywhere. I knew from the way that the schools were getting bigger that the opportunity was there for me to absolutely crush them today, and it worked out.”

Overall there were 50 bass weighing 212 pounds, 10 ounces caught by pros Sunday. All of the final 10 pros weighed in five-bass limits.

Mark Horton of Nicholasville, Kentucky, won the co-angler division and $25,000 Friday with a two-day total of 10 bass weighing 33 pounds, 8 ounces, followed by Kevin King of Blountville, Tennessee, who finished in second place with 10 bass weighing 32 pounds, 6 ounces worth $7,500.

In addition to casting for top awards of up to $125,000 cash in the pro division and up to $25,000 cash in the co-angler division, anglers are also competing for valuable points in hopes of qualifying for the 2016 Forrest Wood Cup, the world championship of bass fishing. The 2016 Forrest Wood Cup will be in Huntsville, Alabama, Aug. 4-7 on Wheeler Lake.

Coverage of the Kentucky Lake tournament will premiere in high-definition (HD) on NBC Sports Network (NBCSN) Sept. 28 from 1 p.m.-2 p.m. EST. The Emmy-nominated "FLW" television show airs on NBCSN, the Pursuit Channel and the World Fishing Network and is broadcast to more than 564 million households worldwide, making it the most widely distributed weekly outdoors-sports television show in the world.