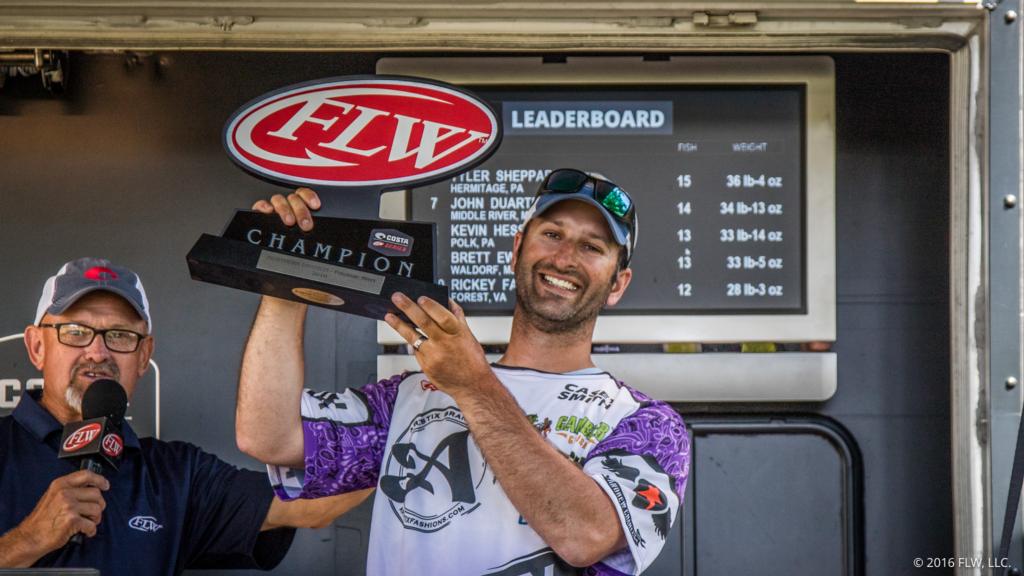 “I feel absolutely phenomenal right now,” said Smith, who earned the win fishing in his first-ever Costa Series event. “I’ve wanted to step up to this level of competition for a long time now. A lot of work went into getting here.

“The key for me this week was the area I concentrated on,” Smith continued. “I found a ditch in the mouth of the Aquia Creek that connected a large grass flat to a deep hole. The fish were using the ditch as a highway and I was able to snatch them out of it. On Day One, I had four bass for 13 pounds by 8:15 a.m.

“The morning bite on Day Two was strong and I had 14 pounds fairly quickly,” said Smith. “In the afternoon I culled out everything in the incoming tide. We just sat there with the Power-Poles down and smashed them for six hours.”

Smith said he caught the majority of his fish throughout the event on a Bluegill Flash-colored Keitech Swing Impact FAT Swimbait as well as a couple of key fish on a green-pumpkin and purple-colored Gambler Southern Swim Jig.

“I dragged the Keitech through the grass as slow as I could,” said Smith. “When it got hung up, I knocked it with the reel. I didn’t yank it, but I give the crank a half-turn and popped it out of the grass. The bait would fall and after a couple of full cranks, they’d bite. It was a reaction bite, but it was very slow.”

Smith said he returned to the ditch on Day Three and hit a flurry around 9:15 a.m. to seal the deal.

“My biggest fish today came on a white ChatterBait,” said Smith. “Luckily I had the ditch to myself this week. We caught a lot of fish, and there’s definitely some more big ones left there.”

The top 10 pros on the Potomac River were:

Machek and Schmitt each caught a bass weighing 5 pounds, 6 ounces – the biggest bass of the tournament in the pro division – that earned them each a Big Bass award of $288.

David Williams of Fredericksburg, Virginia, won the co-angler division and a Ranger Z117 with a 90-horsepower Mercury outboard motor. Williams earned his win with a three-day total catch of 15 bass weighing 44 pounds, 15 ounces.

The top 10 co-anglers on the Potomac River were:

Doug Jenkins of Saint Leonard, Maryland, caught the biggest bass of the tournament in the co-angler division Thursday, a bass weighing 5 pounds, 5 ounces that earned him the day’s Big Bass award of $192.