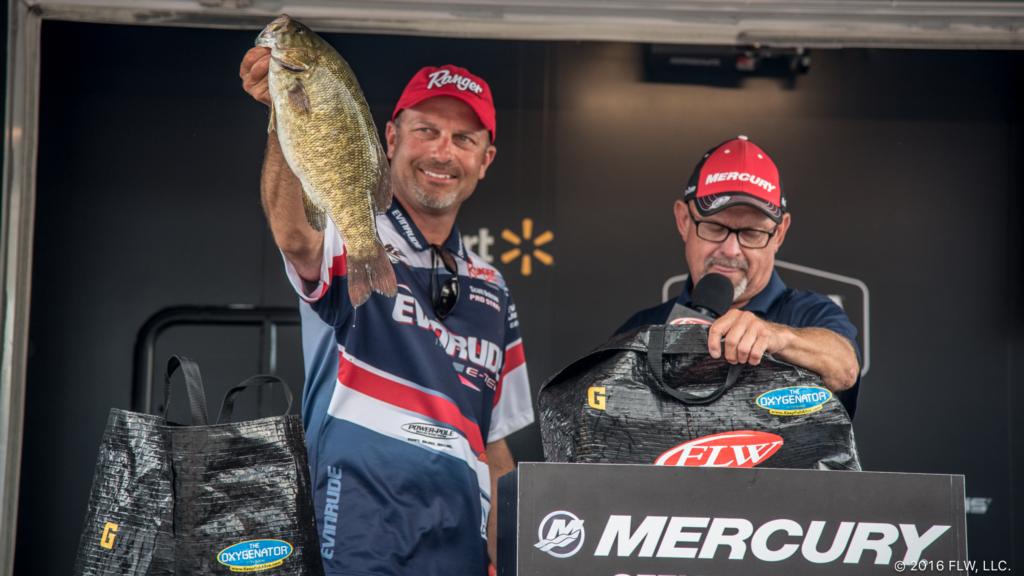 “What a week this has been,” said Dobson, who earned his first career FLW Series victory. “I’ve been so close to winning in the past, and I knew that this tournament was mine to lose today. It was very tough today and my composure was really tested at some points, but it all worked out in the end and I am extremely happy right now.”

Dobson said that the majority of his fish came by rotating through three areas, keying in on spots that he said were, “snot free.”

“If you got any of that slimy grass on your lures, it was over and the fish weren’t going to bite,” Dobson said. “We started to call it ‘snot’ because when that happens your bait is not getting bit. So I keyed in on a couple of isolated areas that were clean and ‘snot’ free.”

It worked for Dobson as he weighed a limit of smallmouth bass each day on a variety of baits, including a Ned rig, which he dubbed “Mr. Flanders”, a drop-shot rig, a jerkbait, a spinbait and a tube. He said that he averaged 9 to 10 fish each day, but only caught 7 keepers Saturday.

“The drop-shot rig caught the most and biggest fish, but the Ned rig and the Duo Realis Spinbait 90 caught some important fish for me today.

“I think the biggest key to my win were my eyes,’ Dobson continued. “I saw every fish that I caught, and my experience fishing shallow back home on Lake St. Clair taught me that bait presentation is everything. If you cast too close, you’ll spook them. If you cast too far away, they can’t see it. It had to be very precise to get them to bite.”

Climpson caught the biggest bass of the tournament in the pro division Thursday – a bass weighing 6 pounds, 4 ounces to earn him the day’s Big Bass award of $274.

Joe Thompson of Clayton, Georgia, won the co-angler division and a Ranger Z117 with a 90-horsepower Evinrude or Mercury outboard motor, with a three-day total of 15 bass weighing 43 pounds, 7 ounces.

Gary McClain of Chesapeake, Virginia, caught the biggest bass of the tournament in the co-angler division Friday weighing 5 pounds, 10 ounces to earn him the day’s Big Bass award of $145.

The Costa FLW Series at 1000 Islands was hosted by the Clayton Chamber of Commerce. It was the second Northern Division tournament of 2016.

The next Costa FLW Series tournament will be the third and final regular-season event in the Northern Division, held August 18-20, on Oneida Lake in Brewerton, New York. For a complete schedule, visit FLWFishing.com.