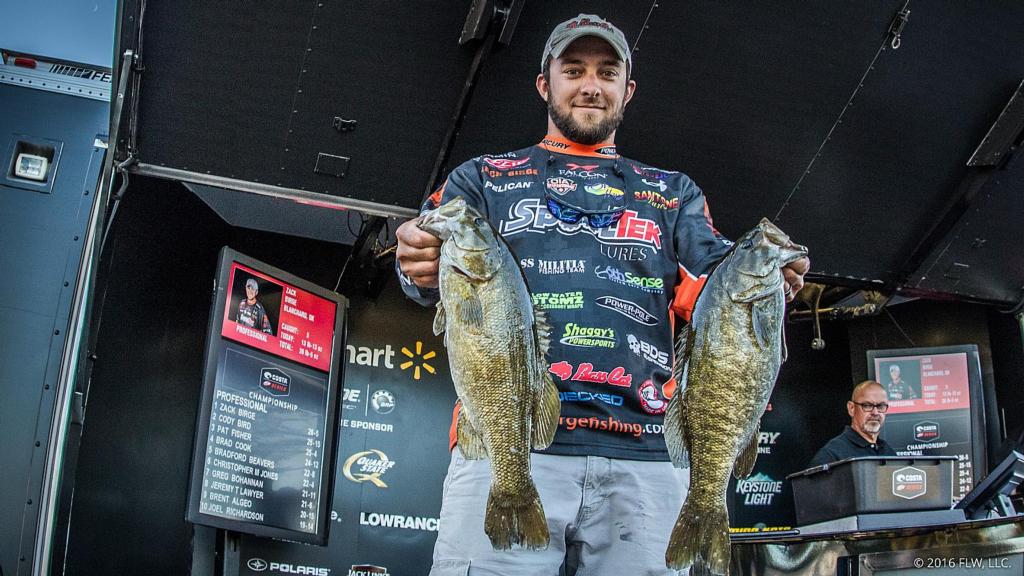 The 2015 FLW Tour Rookie of the Year Zack Birge of Blanchard, Oklahoma, who started the day in 13th place, vaulted to the top of the leaderboard after bringing a five-bass limit to the scales weighing 13 pounds, 13 ounces. Birge’s two-day total of 10 bass totaling 26 pounds, 5 ounces gives him a slim 6-ounce advantage over Cody Bird of Granbury, Texas, heading into the third and final day of competition. The tournament featured 192 boaters and co-anglers from across the globe, but is now cut to 10 with anglers casting for a top cash award of $95,000, including a new Ranger Z518C boat with a 200-horsepower Evinrude outboard, and an automatic qualification to the 2017 Forrest Wood Cup, the world championship of bass fishing.

“I went to a new area today and caught around 15 fish,” said Birge, who won the 2014 FLW Series Championship at Wheeler Lake to jumpstart his professional career. “I didn’t see another boat around me and I think it is because I am so far up the river. Yesterday I only caught five all day so I knew I had to try something else and this new spot worked out.”

Birge said he ran 50 to 60 miles up the James River and caught all of his fish off of one bait – a 6th Sense Lure that he was not yet ready to divulge.

“I think a lot of the other places where guys have been at are just running out of fish,” Birge said. “Getting in to that new area was definitely the key for me today.”

Winning the 2014 Championship at Wheeler Lake seems to have prepared the Oklahoma pro for the pressures of leading a major tournament. He said he was much more nervous two years ago.

The top 10 boaters that will advance to the final day of competition on Table Rock Lake are:

The Costa FLW Series consists of five U.S. divisions – Central, Northern, Southeastern, Southwestern and Western – along with an International division that features anglers from Canada, China, Mexico, South Africa and South Korea. The highest finishing pro from each U.S. division and the new International division based on their finish qualify for the 2017 Forrest Wood Cup, along with the overall top five finishers not already selected as the highest finisher of a division. A total of 11 FLW Series boaters will advance to the 2017 Forrest Wood Cup at Lake Murray in Columbia, South Carolina.

The top 10 co-anglers that advance to the final day of competition on Table Rock Lake are:

The Costa FLW Series Championship at Table Rock Lake is being hosted by ExploreBranson.com.

In Costa FLW Series regular-season competition, each division competes in three tournaments, with competitors vying for valuable points to earn their way into the top 40 and the opportunity to fish in the Costa FLW Series Championship.