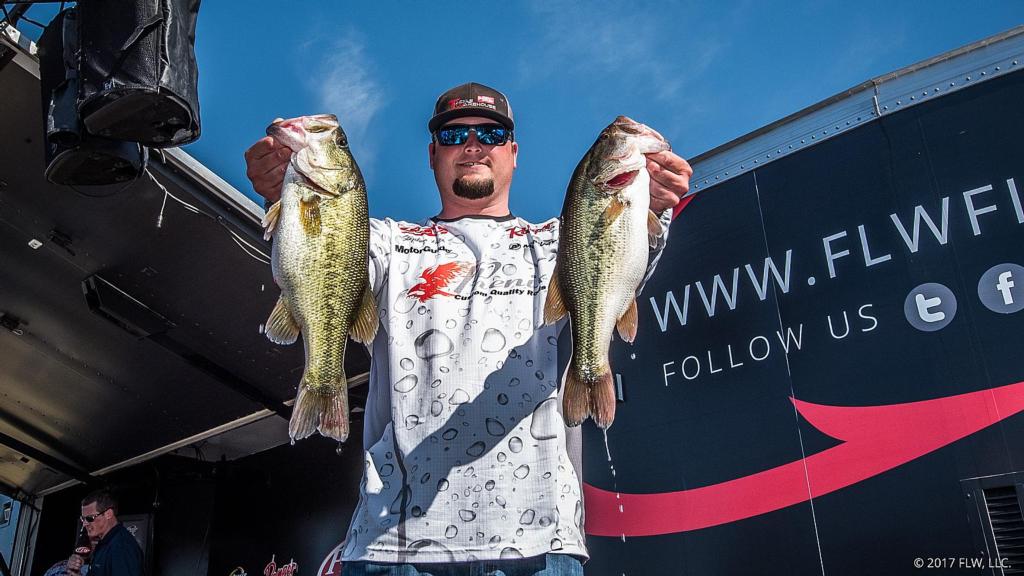 JONESTOWN, Texas – Pro Stephen Patek of Garland, Texas, brought a five-bass limit weighing 14 pounds, 1 ounce, to the scale Friday to take the lead after day two of the FLW Tour at Lake Travis presented by Quaker State with a two-day catch of 10 bass totaling 34-6. Patek will bring a slim 4-ounce lead over Bryan Thrift of Shelby, North Carolina, into day three of the four-day event that features 164 of the top bass-fishing anglers in the world competing for a top cash award of up to $125,000.

Patek said he’s working through the mouth of a main-lake pocket to catch his bass. He said he’s primarily focusing on a hump that has trees around the edges and rocks over the top.

“The mouth isn’t very big, but there’s a lot of bass in there,” said Patek, who is fishing his third season as a professional on the FLW Tour. “Its deepest section is 18 feet down. I think it’s a staging area for bass to spawn, and it seems to be reloading every night.”

Patek said his bait of choice is a Carolina-rigged 3-inch soft-plastic craw.

“They seem to like the smaller profile,” said Patek. “I caught my bass on it this morning, left the hump and didn’t return.”

Patek said that he split the remainder of his day between two areas, including a main-river point that produced for him on day one.

“I caught my biggest bass there on Thursday, but I only could get a small keeper there today,” said Patek. “After those were in the boat, I ran banks and threw a 6-inch swimbait. I got a decent keeper yesterday doing that, but it didn’t give me anything today.”

The Texas pro said he plans to run a similar route on Saturday.

“I plan on spending more time on the hump and the point tomorrow,” said Patek. “I think the mouth will kick out some more bass, so I’m looking forward to getting back out there.”

The top 20 pros that made the Buck Knives Cut after day two and will fish Saturday on Lake Travis are:

David Larson of Mound, Minnesota, won the Co-Angler Division and $20,350 Friday with a two-day total of six bass weighing 21 pounds, 10 ounces, followed by Thomas Martens of Jonestown, Texas, who finished in second place with 10 bass weighing 20 pounds, 11 ounces worth $7,550.

David Wootton of Collierville, Tennessee, earned $250 for the Big Bass award in the Co-Angler Division with a 6-pound, 7-ounce largemouth.

In FLW Tour competition, pros and co-anglers are randomly paired each day, with pros supplying the boat, controlling boat movement and competing against other pros. Co-anglers fish from the back deck against other co-anglers. The full field of anglers competes in the two-day opening round. Co-angler competition concludes following Friday’s weigh-in, while the top 20 pros based on their two-day accumulated weight advance to Saturday. Only the top 10 pros continue competition Sunday, with the winner determined by the heaviest accumulated weight from the four days of competition.

The total purse for the FLW Tour at Lake Travis presented by Quaker State is more than $800,000, including $10,000 through 50th place in the Pro Division.

Prior to the weigh-ins Saturday and Sunday, FLW will host a free Family Fishing Expo at Jones Brothers Park from noon to 4 p.m. The Expo is a chance for fishing fans to meet their favorite anglers, enjoy interactive games, activities and giveaways provided by FLW sponsors, and learn more about the sport of fishing and other outdoor activities.

Also for youth, the FLW Foundation’s Unified Fishing Derby will be held at Jones Brothers Park on Saturday, Feb. 18 from 9-11 a.m. The event is hosted by FLW Foundation pro Cody Kelley along with other FLW Tour anglers, and is free and open to area youth 15 years of age and younger and Special Olympics athletes. Rods and reels are available for use, but youth are encouraged to bring their own if they own one.

The FLW Tour at Lake Travis is hosted by the City of Jonestown and the Austin Sports Commission.

Television coverage of the FLW Tour at Lake Travis presented by Quaker State will premiere in high-definition (HD) on NBC Sports Network (NBCSN) April 12 from 12:30 p.m.-1:30 p.m. EST. The Emmy-nominated "FLW" television show airs on NBCSN, the Pursuit Channel and the World Fishing Network and is broadcast to more than 564 million households worldwide, making it the most widely distributed weekly outdoors-sports television show in the world.