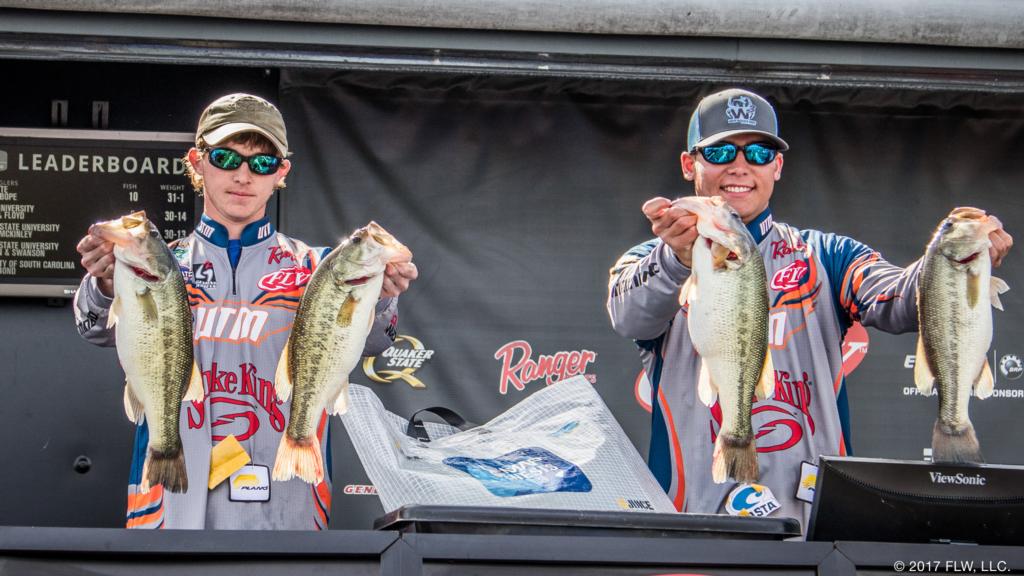 GILBERTSVILLE, Ky. – The University of Tennessee-Martin team of Matthew Lamastus of Hornbeak, Tennessee, and Dylan True of Lawrenceburg, Tennessee, won the third annual YETI FLW College Fishing Open on Kentucky and Barkley lakes Saturday with a two-day total of 10 bass weighing 44 pounds, 4 ounces. The victory earned the club a $27,000 prize package which includes a Ranger Z175 with a 90-horsepower Evinrude outboard and advanced the team to the 2017 YETI FLW College Fishing National Championship.

Lamastus, a sophomore mechanical engineering major, said that the pair didn’t expect to catch the fish they did and their main goal going in was to qualify for next year’s championship. Mission accomplished, but they also won the Ranger/Evinrude boat package and prizes furnished by such sponsors as YETI, Costa, Plano and Zoom.

Tournament leaders always worry, and True and Lamastus sweated through their share of angst as Saturday wore on and it became apparent that they weren’t going to duplicate Friday’s stringer.

“It was slow Friday, and even slower Saturday,” said True, a junior majoring in agricultural business. “We caught our fish in Jonathan Creek Friday, but it sort of dried up and we decided to run to another place we found in Blood River. As it turned out, we caught seven keepers, compared to six on Friday. But the size definitely wasn’t there. I think the bigger fish pulled out some because the water was a little cooler.”

Strike King 2.5 and Series 5 crankbaits produced for the team in the opening round, but as many other anglers discovered, the fish wanted slower-moving baits on Day Two. After going about an hour and a half without boxing a fish, True decided to switch to a Carolina rig with a green-pumpkin-colored 5-inch Strike King Rage Lizard. They caught four of the bass they weighed on it, and the other on the Series 5 crankbait.

“Mainly we just kept the boat in about 10 feet of water, casted to the bank and dragged the Carolina rig out real slow,” added True.

This YETI FLW College Fishing Open was hosted by the Kentucky Lake Convention & Visitors Bureau and Moors Resort & Marina. The next event for FLW collegiate anglers is a Northern Conference tournament scheduled for April 29 on Smith Mountain Lake in Huddleston, Virginia.