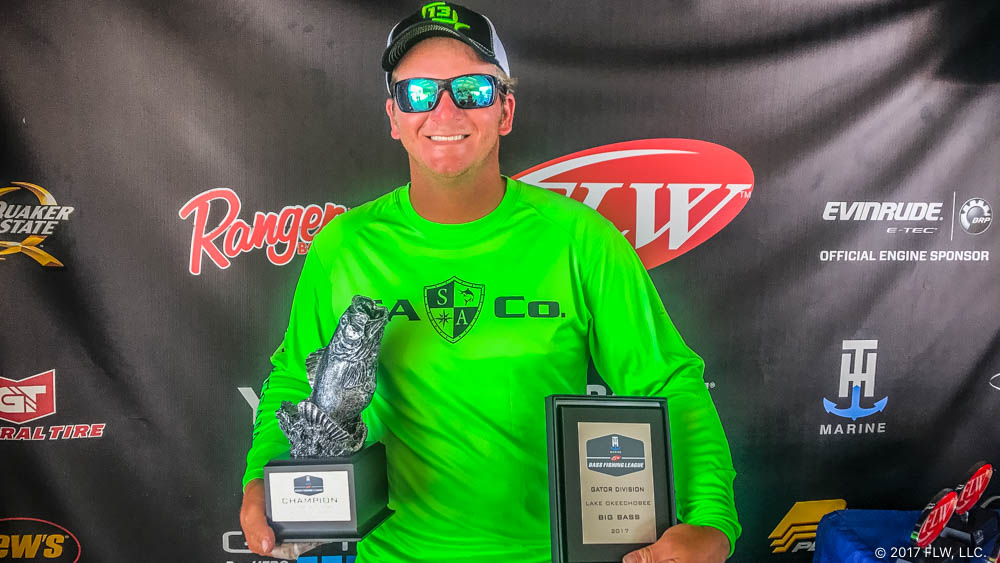 “I began the day at my frogging hole and caught two 6-pounders,” said Mizell, who also won a Gator Division event held on Lake Okeechobee last month, for a total of three career-wins. “That’s where I caught them when I won last month, but I hadn’t been back there since.”

Mizell said his hole was a 100- by 100-yard cove on the North Shore of the lake. He said it protected bass from the wind and had a good mix of lilypads and hydrilla.

“I was actually targeting the pad clumps,” said Mizell. “I used the same frog the entire day to catch my limit.”

Mizell said his frog was a natural-colored Spro Dean Rojas Bronzeye Poppin’ 60. Around 9:30 a.m., Mizell said he originally planned on burning through some nearby schooling fish to fill out the remainder of his limit, but was unable to get anything going by 11 a.m.

“When my original plan failed, I went with Plan B and it worked,” said Mizell. “I returned to the frogging hole, and within five casts I put an 8-pound, 10-ounce bass in the boat. I had to sit down and take a drink of water because I was shaking like a leaf. It was a giant.”

The Florida stalwart said he added an additional 4- and 5-pounder to his livewell within another 20 casts.

“My 13 Fishing Envy Black Rod had the backbone I needed to pull them out of that cover,” said Mizell. “Without it, I wouldn’t have had the confidence to boat-flip them.”

Mizell’s 8-pound, 10-ounce largemouth – the heaviest of the event in the Boater Division – also earned him the day’s Boater Big Bass award of $650.