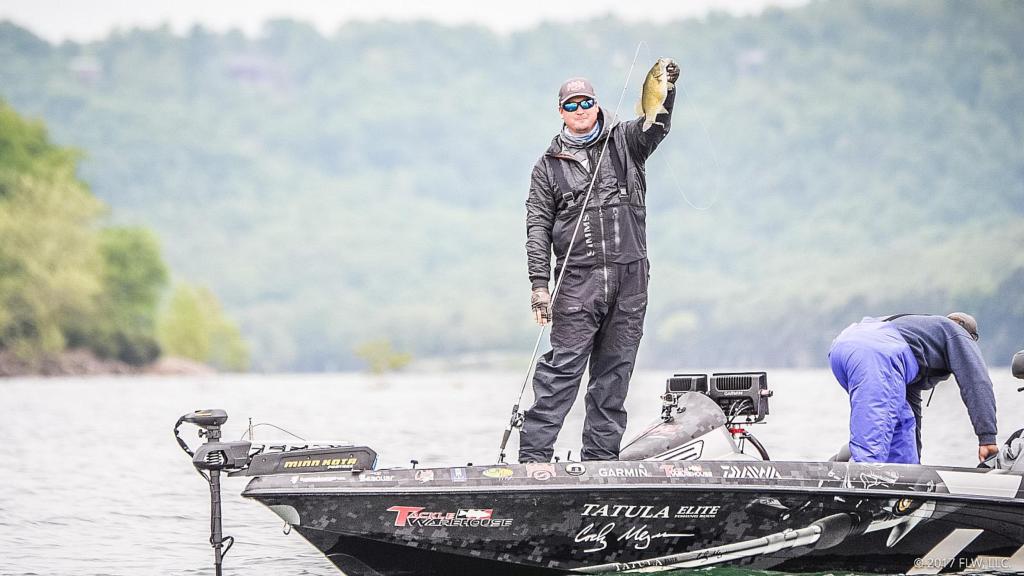 ROGERS, Ark. – Pro Cody Meyer of Auburn, California, caught a five-bass limit weighing 12 pounds, 8 ounces Friday to retain his lead in the FLW Tour event at Beaver Lake with a two-day catch of 10 bass weighing 28-9. He now holds a slim 3-ounce lead over second place pro Jason Reyes of Huffman, Texas, in the four-day event, presented by General Tire, that features a field of 161 of the world’s best bass-fishing professionals casting for a top award of up to $125,000.

“I started on the same spot where I got the majority of my fish yesterday and caught a limit by 10 (a.m.),” said Meyer, who has two prior top-10 finishes at Beaver Lake in FLW Tour competition. “The fishing was definitely a lot slower and the fish weren’t as big today, but I was happy to have a limit.

“I left that area and went to a spot where I had marked a bedding smallmouth in practice,” Meyer continued. “The water has come up quite a bit, so I couldn’t see her and I was just pitching to where I thought it was. I ended up catching a nice largemouth there – some good luck.”

Meyer said that he ended up catching two more fish later in the day and his five-bass limit that he brought to the scale consisted of two largemouth bass and three smallmouth. He said that the same baits that he used on Day One produced again for him on Friday – a tube, a drop-shot rig, a swimbait and a flipping rod.

“The chances of getting another limit out of my starting area is slim to none,” Meyer said. “Tomorrow I’m just going to go fish. You have to take it one day at a time here and concentrate on getting the right bites. Hopefully tomorrow I can make the right decisions and find the big ones.”

The top 20 pros that made the Buck Knives Cut and will fish Saturday on Beaver Lake are:

Ashmore earned the Big Bass award on the pro side Friday, weighing a 5-pound, 3-ounce largemouth to win the $500 prize.

Dennis Crawford of Rogers, Arkansas, earned $250 for the Big Bass award in the co-angler division with a 4-pound, 6-ounce bass.

In FLW Tour competition, pros and co-anglers are randomly paired each day, with pros supplying the boat, controlling boat movement and competing against other pros. Co-anglers fish from the back deck against other co-anglers. The full field of 322 anglers competed Thursday and Friday. Co-angler competition concluded following Friday’s weigh-in, while the top 20 pros based on their two-day accumulated weight advance to Saturday. Only the top 10 pros continue competition Sunday, with the winner determined by the heaviest accumulated weight from the four days of competition.

The FLW Tour has visited Beaver Lake 18 times previously, with 2017 marking the 19th visit in FLW’s 22-year history. The total purse for the FLW Tour at the Beaver Lake presented by General Tire is more than $800,000, including $10,000 through 50th place in the Pro Division. The tournament is hosted by Visit Rogers.

Anglers will take off from the Prairie Creek Park Boat Ramp located at 9300 N. Park Road in Rogers at 6:30 a.m. each day of competition. Saturday and Sunday’s final weigh-ins, originally scheduled to be held at Walmart in Rogers, have been moved lakeside to Prairie Creek Park due to inclement weather being forecast for the weekend. They will begin at 4 p.m.

Prior to the weigh-ins Saturday and Sunday, FLW will host a free Fishing Expo at Prairie Creek Park from noon to 4 p.m. each day. The Expo is a chance for fishing fans to meet their favorite anglers, enjoy interactive games, activities and giveaways provided by FLW sponsors, and learn more about the sport of fishing and other outdoor activities.

Television coverage of the FLW Tour at Beaver Lake presented by General Tire will premiere in high-definition (HD) on NBC Sports Network (NBCSN) June 18 from 6 a.m.-7 a.m. EDT. The Emmy-nominated "FLW" television show airs on NBCSN, the Pursuit Channel and the World Fishing Network and is broadcast to more than 564 million households worldwide, making it the most widely distributed weekly outdoors-sports television show in the world.