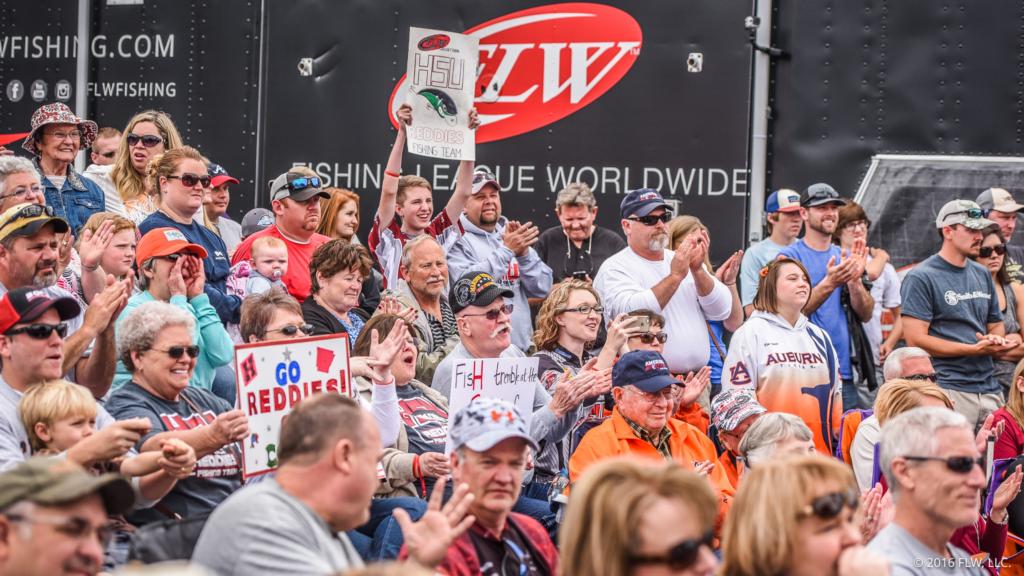 FLORENCE, Ala. – The best weekend anglers from across the country fishing the T-H Marine FLW Bass Fishing League (BFL) All-American won’t be the only anglers competing in Alabama next week. College fishing teams from across the country will also be heading to Wheeler Lake in Florence, Alabama, May 31-June 3 for the 2017 YETI FLW College Fishing National Championship presented by Lowrance C-Map Genesis. A total of 148 college bass fishing clubs will be competing in the internationally-televised tournament for a $30,000 prize package, including a new Ranger Z175 boat with a 90-horsepower Evinrude outboard and entry into the 2017 Forrest Wood Cup, the world championship of bass fishing.

The winning team will then compete against each other Saturday in a one-day fish-off on neighboring Wilson Lake. The two anglers will weigh in prior to the final weigh in of the BFL All-American in Florence. The team member with the largest one-day stringer will advance to the world championship of bass fishing, the 2017 Forrest Wood Cup, and a chance to win $300,000.

“This is going to be an interesting tournament,” said FLW Tour pro Bradley Dortch of Atmore, Alabama, who won a Costa FLW Series tournament on Wheeler Lake in 2016. “We didn’t have much of a winter, so I’m pretty sure that the fish have all spawned by now. The fish at Wheeler Lake are already moving to their summertime patterns. The teams in this tournament are going to have to get out more towards the ledges.

“There are always fish to be caught shallow,” Dortch continued. “I just don’t know if you can win the tournament fishing that way. The winners are going to find a big group of females that spawned early and have already moved out.”

“I’m not a huge fan of umbrella rigs, but I’d also have one of those tied on,” Dortch said. “I wouldn’t say both anglers should be throwing it, but one of us would be. Especially if I was fishing out deep.”

Dortch predicted that the three-day winning total of the event on Wheeler Lake would be right around 50 pounds.

Anglers will take off from Joe Wheeler State Park, located at 4401 McLean Drive, in Rogersville, Alabama, at 6:30 a.m. CDT. Wednesday and Thursday’s weigh-in will be held at the State Park beginning at 2:30 p.m. Friday’s weigh-in will be held at McFarland Park, located at 200 Jim Spain Drive in Florence, at 3 p.m., prior to the day 2 weigh-in of the BFL All-American championship at Pickwick Lake.

The winning team will compete Saturday in a one-day fish-off on Wilson Lake. The two anglers will weigh in at 3:25 p.m. prior to the final weigh in of the BFL All-American championship at Pickwick Lake. All takeoffs and weigh-ins are free and open to the public.

Schools competing in the 2017 FLW College Fishing National Championship, which is hosted by the Florence/Lauderdale Tourism Bureau, include:

Rochester Institute of Technology – Jason Karol and John Henderson, both of Rochester, N.Y.

University of Alabama – Caiden Sinclair, Hoover, Ala., and Ethan Flack, Cullman, Ala.

University of Alabama – John Davis, Birmingham, Ala., and Payton McGinnis, Jasper, Ala.

University of Alabama-Birmingham – Chris Hiott, Trussville, Ala., and Jacob Burns, Morris, Ala.

University of Louisiana-Monroe – Tyler Stewart and Nicholas Joiner, both of West Monroe, La.

University of Louisiana-Monroe – Thomas Soileau and Hunter Freeman, both of Monroe, La.

University of North Alabama – Hunter Haney and Andrew Tate, both of Town Creek, Ala.

University of North Alabama – Sloan Pennington, Childersburg, Ala., and Martin McCravy, Killen, Ala.

University of Tennessee – Jay Emmert and Anthony Johnson, both of Knoxville, Tenn.

University of Wisconsin – Jacob Anderson and Bryce Smith, both of Princeton, Wis.

The FLW College Fishing National Championship awards the top team a $30,000 prize package, including a Ranger Z175 boat with a 90-horsepower outboard engine and an entry into the 2017 Forrest Wood Cup. The Forrest Wood Cup, the world championship of bass fishing, will be held August 11-13 on Lake Murray in Columbia, South Carolina, and will offer a collegiate angler the opportunity to compete for a top award of $300,000.

Television coverage of the FLW College Fishing National Championship will premiere in high-definition (HD) on NBC Sports Network (NBCSN) Oct. 4 from Noon -1 p.m. EDT. The Emmy-nominated “FLW” television show airs on NBCSN, the Pursuit Channel and the World Fishing Network and is broadcast to more than 564 million households worldwide, making it the most widely distributed weekly outdoors-sports television show in the world.