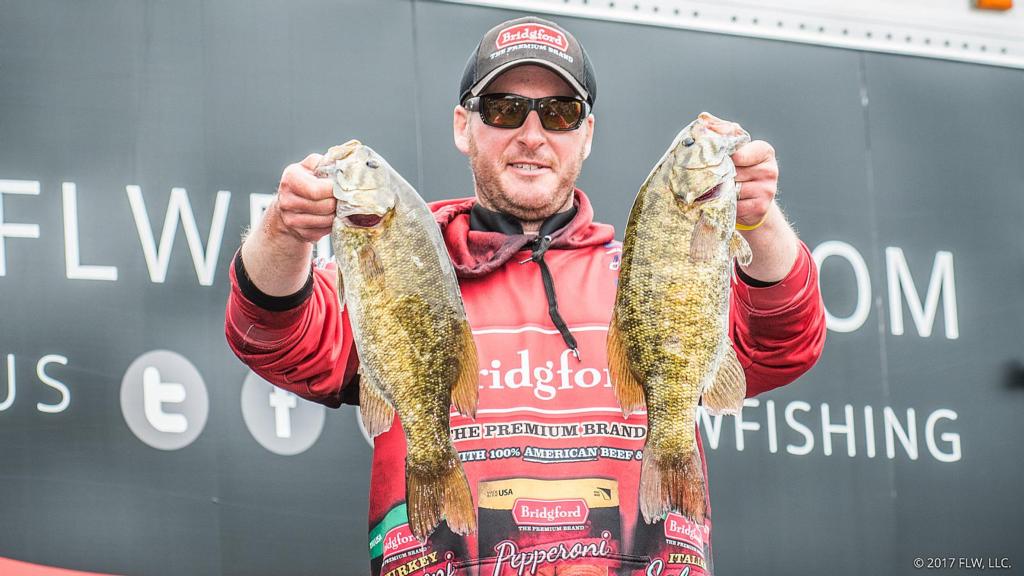 LA CROSSE, Wis. – Pro Matthew Stefan of Junction City, Wisconsin, weighed a five-bass limit totaling 18 pounds even Thursday to sit atop the standings after Day One of the FLW Tour at the Mississippi River presented by Evinrude. Stefan will bring a slim 2-ounce advantage into Day Two of the four-day event that features 160 of the world’s top bass anglers competing for a top cash award of up to $125,000.

“I feel like the way I’m fishing is a lot different than what a lot of guys would probably expect,” said Stefan, a seven-year Tour veteran who is one of three Wisconsin residents competing in the event. “I live on the Wisconsin River, which is literally a mini-Mississippi River, and what I’m doing right now is exactly what I would be doing back home. It’s not anything crazy or off-the-wall, but it’s not what a lot of people would go to right off the bat.”

“I’m keying in on the smallmouth – I think I’ve got a decent pattern,” said Stefan. “I didn’t really find much for largemouth in practice. I was able to get them to bite, but they were random and didn’t have good size to them.”

Stefan said he was able to put a dozen keepers in his boat throughout the day, and that his knowledge of the region’s smallmouth migration helped him do it.

“The one thing I’ve learned over the years about the Mississippi River is that if you want to compete here, you’ve got to understand the migration routes,” said Stefan. “It’s a little bit different for largemouth and smallmouth. For smallmouth, you’ve got the migration from the main-river channel to their spawning zones. Whether it’s the main channel or two miles into a backwater, you’ve got specific holding areas in those routes. If you can get an idea of those routes, you can track them.”

Stefan said he plans on starting Day Two of the event in Pool No. 8, and would prefer to stay there if he can get the right bites.

“If I can catch the weight I need to make the top-20 cut I may not go down to No. 9 and save those areas for the rest of the weekend,” said Stefan. “But, if the morning doesn’t go as planned, I’ll make the run in a heartbeat.”

The top 10 pros after day one on the Mississippi River are:

Weaver caught a bass weighing 4 pounds, 15 ounces – the largest in the Pro Division – which earned him the day's $500 Big Bass award.

The top 10 co-anglers after day one on the Mississippi River are:

Goodyear earned $250 for the Big Bass award in the Co-angler Division with a 4-pound, 3-ounce fish.

The total purse for the FLW Tour at Mississippi River presented by Evinrude is more than $800,000, including $10,000 through 50th place in the Pro Division. The tournament is hosted by Explore La Crosse.

Prior to the weigh-ins Saturday and Sunday, fans are invited to experience the free Fishing Expo at Veterans Freedom Park from noon to 4 p.m. The Expo is a unique opportunity for fishing fans to meet their favorite anglers, enjoy interactive games, activities and giveaways provided by FLW sponsors, and learn more about the sport of fishing and other outdoor activities.

Youth are also invited to participate in the free FLW Foundation’s Unified Fishing Derby at Copeland Park, located at 1130 Copeland Park Drive in La Crosse, on Saturday, May 20, from 9-11 a.m. The event, hosted by FLW Foundation pro Cody Kelley along with other FLW Tour anglers, is free and open to area youth (18 years of age and younger) and Special Olympics athletes (all ages). Rods and reels are available for the first 50 participants to use, but youth are encouraged to bring their own if they own one.

Television coverage of the FLW Tour at Mississippi River presented by Evinrude will premiere in high-definition (HD) on NBC Sports Network (NBCSN) Aug. 2 from Noon-1 p.m. EDT. The Emmy-nominated "FLW" television show airs on NBCSN, the Pursuit Channel and the World Fishing Network and is broadcast to more than 564 million households worldwide, making it the most widely distributed weekly outdoors-sports television show in the world.