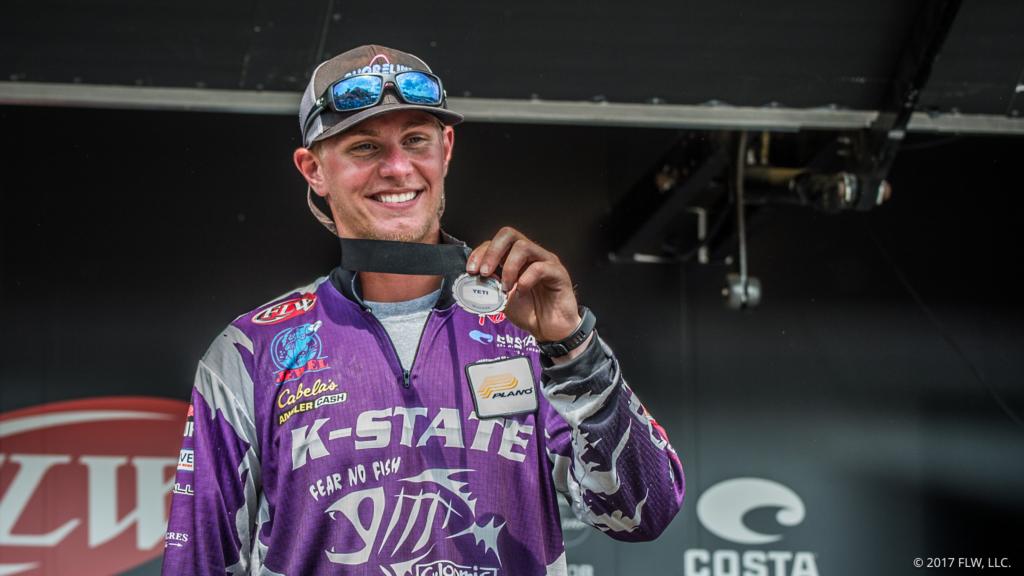 FLORENCE, Ala. – For just the second time in YETI FLW College Fishing history, the National Championship winners Travis Blenn and Kyle Alsop from Kansas State University faced off Saturday in a one-day fish-off on Wilson Lake in North Alabama to decide which team member would represent their school at the 2017 Forrest Wood Cup, the world championship of bass fishing.

After the scales settled and the final fish had been weighed, Alsop won the Forrest Wood Cup qualification with a five-bass limit totaling 10 pounds, 5 ounces. Blenn weighed a five-bass limit totaling 7 pounds, 7 ounces, giving Alsop the win and advancing him to compete against the best anglers in the world on Lake Murray in Columbia, South Carolina at the Forrest Wood Cup.

“This has been such an unbelievable experience this week,” said Alsop, a recent KSU mechanical engineering graduate who resides in Overland Park, Kansas. “I can’t believe that I’m going to fish in the Forrest Wood Cup. I might get my tail whipped, but I’m going to have fun doing it.”

“I can’t wait to sit down and start looking at some maps and doing a little research,” Alsop said. “I’m going to treat it like every other tournament I guess, but we’ll see what happens. Our old teammate on the fishing team Ryan Patterson won a national championship there in 2012, so I’m definitely going to talk to him for some advice. I cannot wait until August.”

The final standings after the one-day fish-off on Wilson Lake were:

Full results and standings for the 2017 YETI FLW College Fishing National Championship can be found at FLWFishing.com.

The 2017 YETI FLW College Fishing National Championship, hosted by the Florence/Lauderdale Tourism Bureau, featured 139 of the top college bass fishing clubs from across the nation competing for a $30,000 prize package, including a new Ranger Z175 boat with a 90-horsepower Evinrude outboard and entry into the 2017 Forrest Wood Cup. The Forrest Wood Cup, the world championship of bass fishing, will be held Aug. 11-13 on Lake Murray in Columbia, South Carolina, and will offer Alsop the opportunity to compete for a top award of $300,000.

Television coverage of the YETI FLW College Fishing National Championship will premiere in high-definition (HD) on NBC Sports Network (NBCSN) Oct. 4 from Noon -1 p.m. EDT. The Emmy-nominated "FLW" television show airs on NBCSN, the Pursuit Channel and the World Fishing Network and is broadcast to more than 564 million households worldwide, making it the most widely distributed weekly outdoors-sports television show in the world.