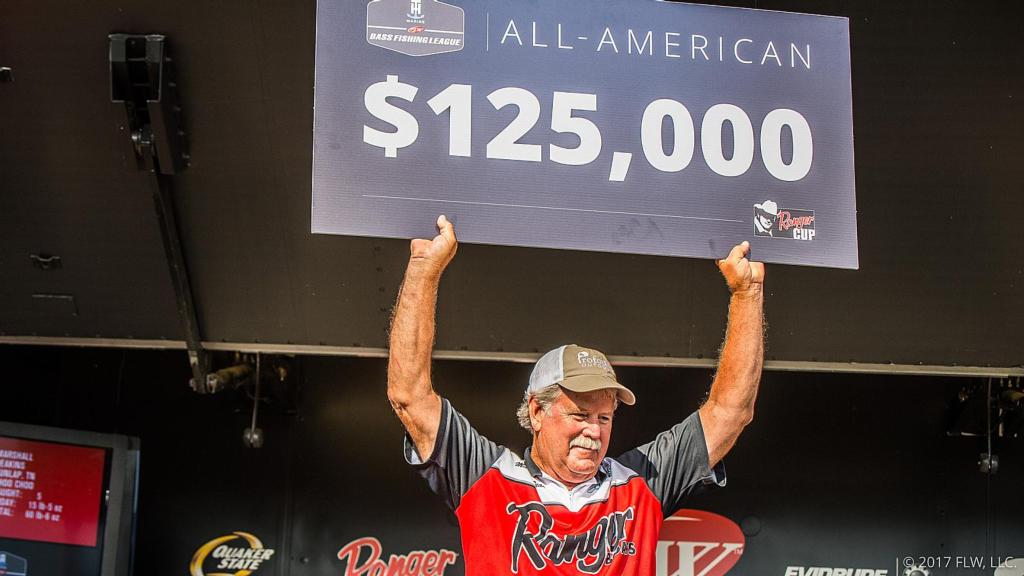 “This is the biggest win of my career by far,” said Deakins, who had five prior wins at the BFL level in FLW competition. “I didn’t think I had a shot at winning at this tournament, even with my 10-pound lead going into the final day. I figured somebody would catch them better – but it worked out.”

“I couldn’t catch fish there unless the current was really strong to wash my jig up over the rocks,” said Deakins. “Yesterday there was a lot of current and I could fish the jig over it, but today it got hung up.”

Deakins’ second area was a shell bar on top of a main-river ledge, just upriver from Kogers Island.

“I kept the boat in 18 to 21 feet of water and I threw up to 4 to 6 feet on top of it,” said Deakins. “I weighed two from the shell bar today, and finished out my limit back at the bridge.”

Deakins’ key bait throughout the event was an October Pumpkin-colored Profound Lures football-head jig with a Rootbeer Pepper Green-colored Zoom Fat Albert Twin Tail Grub trailer. Today’s final limit was also caught with the help of a Morning Dawn-colored Roboworm on a drop-shot rig, but Deakins said the jig and its color were the most crucial factor to his strategy this week.

“I fished with (former FLW Tour pro) Lionel Botha before he competed in the 2013 All-American on Nickajack Lake, which sets up a lot like Pickwick Lake,” said Deakins. “He used that color and caught a lot on it. I’ve fished it ever since then and it works – especially early in the summer.”

Alex Hester of Crossville, Tennessee, won the Co-angler Division and $50,000 Saturday with a three-day total of 15 bass weighing 49 pounds even, followed by Jacob Harris of Bonne Terre, Missouri, in second place with 14 bass weighing 36-10.

Hosted by the Florence/Lauderdale Tourism Bureau, the BFL All-American featured 98 of the best boaters and co-anglers from across the 24-division T-H Marine BFL circuit and the TBF National Championship casting for cash prizes of up to $125,000 in the Boater Division and $60,000 in the Co-angler Division, plus an opportunity to compete for bass fishing’s most coveted prize – the Forrest Wood Cup – held Aug. 11-13 on Lake Murray in Columbia, South Carolina.

Television coverage of the T-H Marine BFL All-American at Pickwick Lake will premiere in high-definition (HD) on NBC Sports Network (NBCSN) Oct. 11 from Noon-1 p.m. EDT. The Emmy-nominated "FLW" television show airs on NBCSN, the Pursuit Channel and the World Fishing Network and is broadcast to more than 564 million households worldwide, making it the most widely distributed weekly outdoors-sports television show in the world.

For a full schedule of events, complete details and updated information visit FLWFishing.com. For regular updates, photos, tournament news and more, follow FLW on Facebook at Facebook.com/FLWFishing and on Twitter at Twitter.com/FLWFishing.