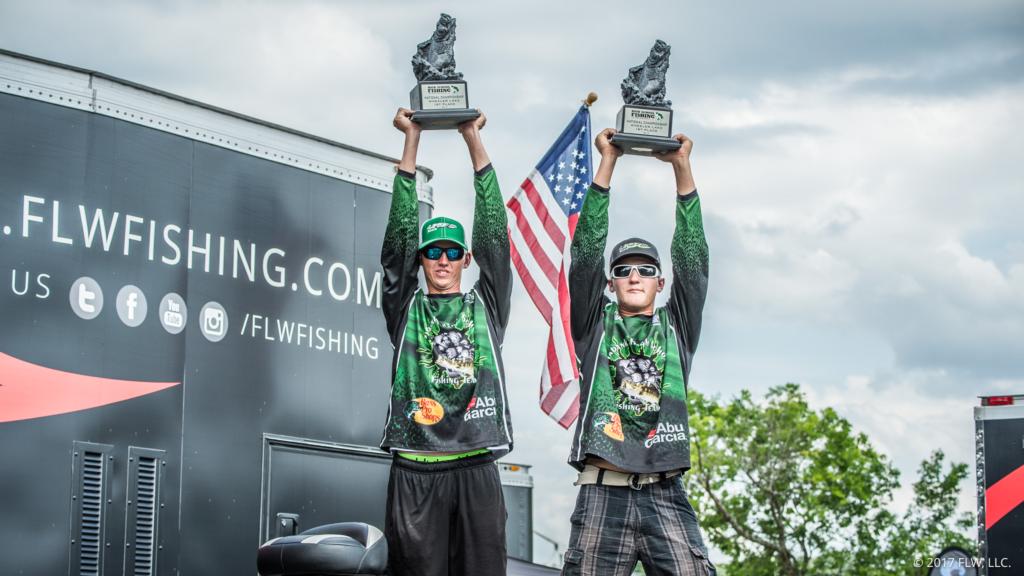 FLORENCE, Ala. – The Mabank High School duo of Justin Shelton of Seven Points, Texas, and Dakota Pfoh, of Eustace, Texas, brought a five-bass limit to the scale Saturday weighing 17 pounds, 7 ounces to win the 2017 TBF/FLW High School Fishing National Championship on Wheeler Lake in Florence, Alabama. The win earned the team trophies, the title of national champions and each angler a $5,000 scholarship to their college of choice.

A field of 13 teams competed in the event, which launched from Joe Wheeler State Park in Rogersville. The Mabank High School duo won by an 8-pound, 2-ounce margin over second place Harmony High School from St. Cloud, Florida, who weighed in five bass totaling 9-5. Mabank’s 17-7 limit was greater than any limit weighed in by the YETI FLW College Fishing National Championship teams that fished Wheeler for three days prior to the high school event.

The key to Mabank’s win was one key area on the main lake of Wheeler that was loaded with bait. They camped on the spot all day long.

“We found one place in practice and kind of left it alone,” says Shelton. “We went in there today and wore ’em out.”

The spot was located near some large barge tie-offs. A ledge sloped up to a shell bed that was about 5 feet deep on top. Above the shell bed was a 2-foot-deep island. Pfoh and Shelton positioned above the shell bed and cast out, dragging jigs back up the slope. They also circled the island, which produced a key fish but also gave the shell bed time to replenish. Each time they fished through the main spot again produced another keeper.

Their jigs were either black and blue or green-pumpkin and rigged with matching Strike King Rage Craw trailers. While the jig bite was key, according to Pfoh the team also caught a couple of fish on a Strike King 5XD crankbait and a Bass Pro Shops Speed Shad swimbait, Texas-rigged with a screw-in weight, which they worked through some grass.

Both anglers graduated in 2016 – the year they qualified for this championship. Shelton is attending community college and working, while focusing on his fishing. Pfoh is angling for a fishing career as well. Both hope to land on a YETI FLW College Fishing club

Complete results for the remaining teams and photos from the event can be found at FLWFishing.com.