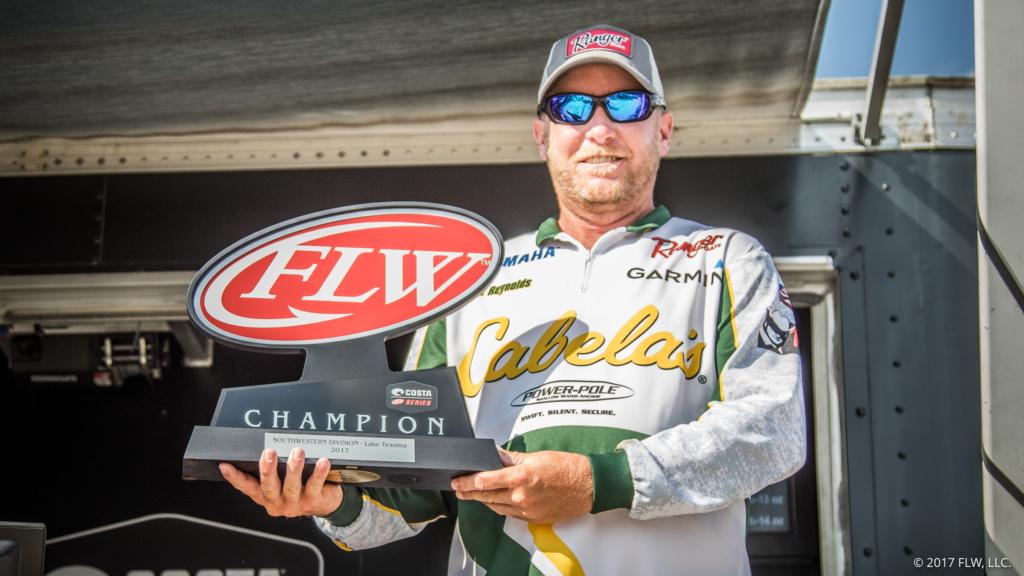 “I put a lot of work into preparing for this event,” said Reynolds, who earned his first career-victory in FLW Series competition. “The payday means more than anything to me right now. I’m building a house and we have a baby on the way, so any money helps.

“I played the wind a lot this week – it was one of the biggest factors in where I decided to fish,” continued Reynolds. “On Day One it was blowing really hard so I stayed shallow. On Day Two it was a bit lighter so I was able to catch some out deep. On Day Three, it was so calm that all but one came from deep water.”

Reynolds said his most productive bait up shallow was a Heddon Super Spook topwater. He said his shallow areas were primarily on the main lake.

“I focused on flat points and banks with rock, sand and clay,” said Reynolds. “The biggest key was the shad. If I could find shad pushed up on the flats, I knew I could catch them.”

For the deep bite, Reynolds worked through stumps, brush and rock piles with a Texas-rigged green-pumpkin-colored Zoom Trick Worm with a ½-ounce weight.

“I had deeper areas both on the main lake and in pockets,” said Reynolds “Some keepers came as shallow as 10 feet, but most were 20 to 25 feet down.”

Joe Lane of Republic, Missouri, caught a 6-pound, 11-ounce bass Thursday – the biggest of the tournament in the Boater Division. For his catch, Lane earned the day’s Boater Big Bass award of $242.

Chris Jeffery caught the biggest bass of the tournament in the Co-angler Division Thursday – a fish weighing 6 pounds, 7 ounces. The catch earned him the day’s Co-angler Big Bass award of $161.