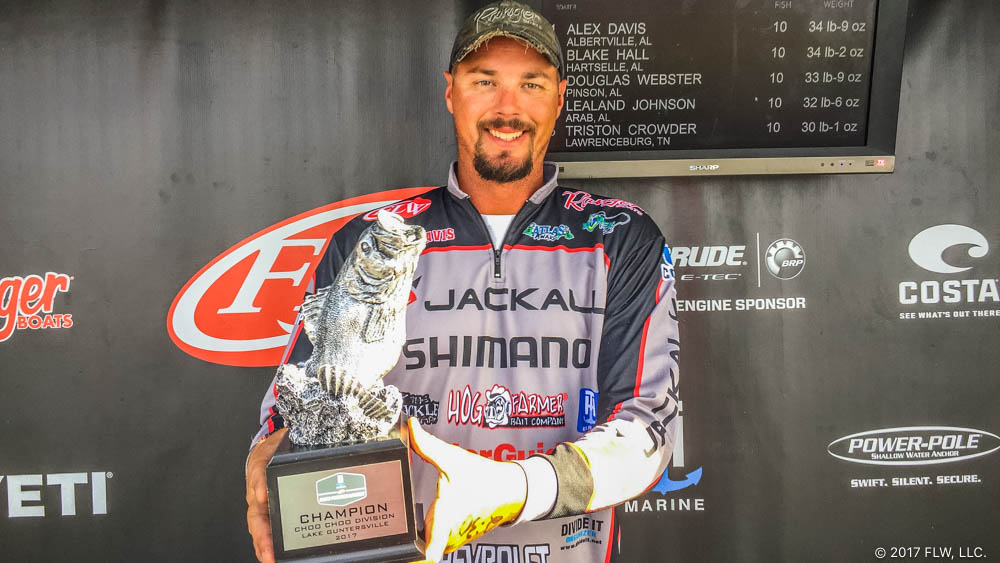 “On Saturday I caught 20 keepers – it was a great day,” said Davis, who earned his third career-victory in BFL competition. “My heaviest came from a 20-yard stretch that had hollow milfoil surrounded by hydrilla. It was near shore and ended up being the area that carried me through the tournament.”

Davis said 8 of 10 fish that he weighed in were caught on a black Jackall Kaera Frog.

“I started out at the stretch Sunday, but wasn’t able to put anything in the boat,” said Davis. “After letting the area rest, I returned and caught two keepers including a 5-pounder using a (black and blue) Jackall Archelon.”

Following those fish, Davis said he was forced to leave his area due to large waves.

“I went to a spot where I had gotten couple of bites in practice, but when I got there, my trolling motor cable broke,” said Davis. “I spent the rest of the day putting my Power-Poles down, fishing and then moving the boat with my outboard. Luckily, I was in an area that didn’t really need a trolling motor to be productive.”

Pat Kelly of Guntersville, Alabama, caught a bass weighing 7 pounds even – the heaviest of the event in the Boater Division – and earned the Boater Big Bass award of $705.

Moss caught the largest bass in the Co-angler Division – a fish weighing 5 pounds, 12 ounces – and earned the Co-angler Big Bass award of $337.