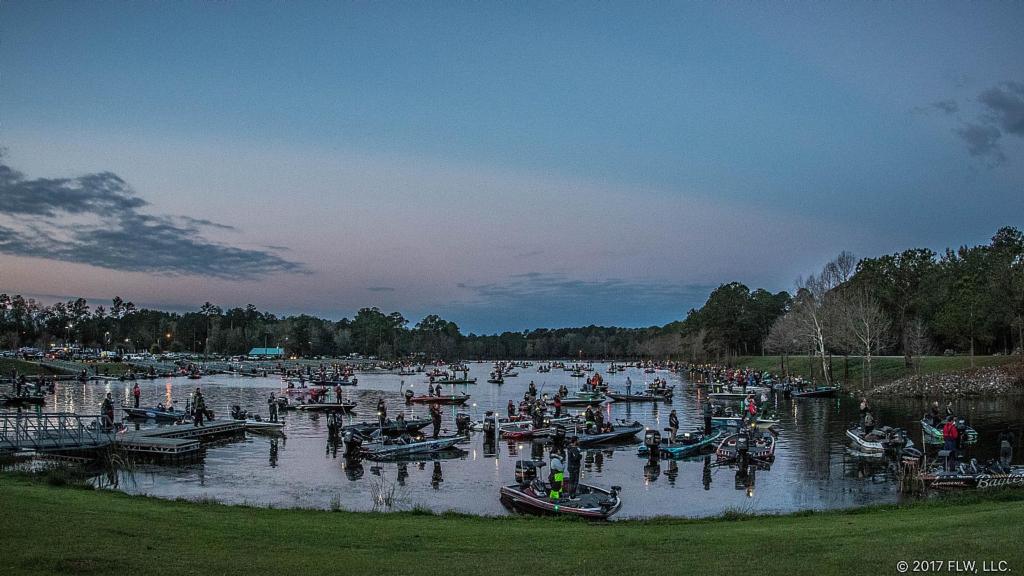 BAINBRIDGE, Ga. (Jan. 30, 2018) – YETI FLW College Fishing will continue the season with an event Feb. 10 on Lake Seminole presented by Bass Pro Shops. The tournament, hosted by the Bainbridge Convention and Visitors Bureau, is the first of three regular-season events for anglers in the Southeastern Conference, and will feature a top prize of a $2,000 club scholarship and an invitation to compete in the 2019 College Fishing National Championship.

“This is going to be a great tournament,” said FLW Tour pro Buddy Gross of Chickamauga, Georgia, who won the Costa FLW Series event on Lake Seminole in 2017. “The bass are prespawn right now and there are a lot of fish fattened up. The lake is on fire – last weekend it took 32 pounds to win a local tournament – and they’re hitting it at just the right time. They’re going to be able to fish how they’d like and catch them in a lot of different ways.

“I think it’ll likely be a grass deal and the fish will be set up in a lot of pre-spawn areas,” Gross continued. “The bass on Seminole use sand to bed, so I’d be looking for grassy flats and humps near sandy bottoms. I think there will be a big Rat-L-Trap bite, and a flipping bite in the hydrilla. Senkos and swimbaits will produce as well. Teams are going to be able to spread out.”

Gross offered words of advice for college anglers who may be visiting the lake for the first time – be careful.

“Lake Seminole has a lot of standing timber, so it is important that the college anglers take their time and make sure that they are being cautious when driving around the lake,” Gross said. “Look for areas near Spring Creek – there are a lot of little arms and pockets where you can get back to little ponds that offer a lot of opportunity. I think we’ll likely see a winning limit in the mid-20s.”

Competitors will take off from the Bainbridge Earle May Boat Basin, located at 100 Boat Basin Circle in Bainbridge, Georgia, at 7:30 a.m. EST Saturday. Weigh-in will be held at the boat basin beginning at 3 p.m. Takeoff and weigh-in are free and open to the public.

Schools expected to compete in the Lake Seminole tournament include:

Auburn University – Mitchell Jennings and Lauren Remolde, both of Auburn, Ala.

Faulkner University – Breanna Wyatt and Joseph Lacy, both of Pell City, Ala.

University of Florida – Colby Eldridge and William Gibbs, both of Panama City, Fla.

University of North Georgia – Tristan Thomas and Braxton Martin, both of Lula, Ga.

FLW is the world’s largest tournament-fishing organization, providing anglers of all skill levels the opportunity to compete for millions in prize money in 2018 across five tournament circuits. Headquartered in Benton, Kentucky, with offices in Minneapolis, FLW and their partners conduct 286 bass-fishing tournaments annually around the world, including the United States, Canada, China, Italy, South Korea, Mexico, Portugal, Spain and South Africa. FLW tournament fishing can be seen on the Emmy-nominated “FLW" television show, broadcast to more than 564 million households worldwide, while FLW Bass Fishing magazine delivers cutting-edge tips from top pros. For more information visit FLWFishing.com and follow FLW at Facebook, Twitter, Instagram, YouTube and Snapchat.