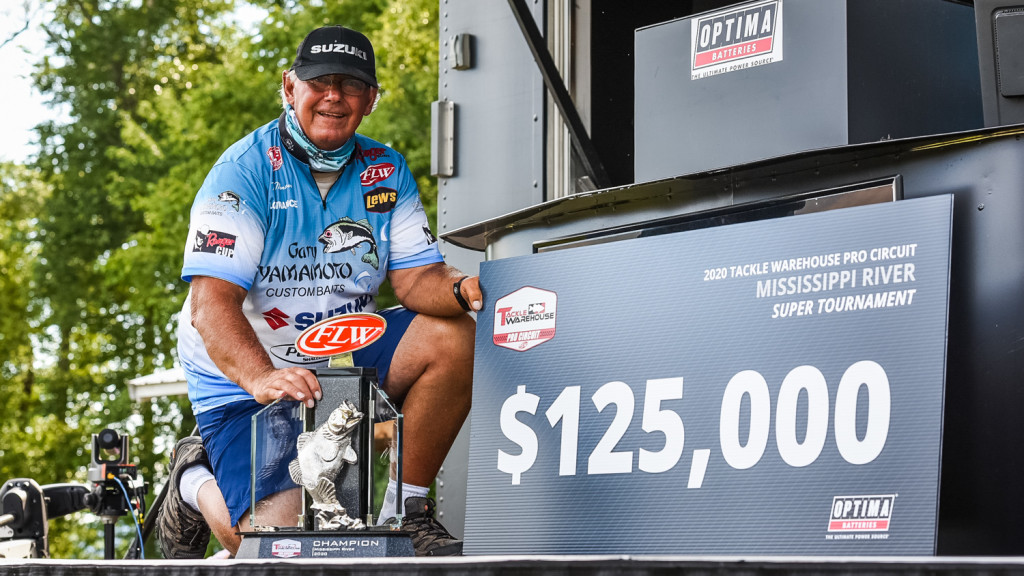 LA CROSSE, Wis. – The man deemed the “Godfather of the Mississippi River” finally got it done at home. La Crosse’s own 71-year-old Yamamoto Baits pro Tom Monsoor of La Crosse, Wisconsin, caught a five-bass limit weighing 12 pounds, 10 ounces Saturday to win $125,000 at the Tackle Warehouse Pro Circuit at the Mississippi River presented by OPTIMA Batteries with a four-day catch of 20 bass weighing 54-10.

“I can’t believe it. Winning at home is the neatest thing in the world. I’m going to remember this moment forever,” said Monsoor, who broke his own record as the oldest angler to ever win an FLW pro-level event. “This tournament had 50 of the best guys from MLF, and the top guys from FLW – it doesn’t get any harder than that. I am the luckiest guy in the world to be able to do what I love. To win at home – I can’t believe it.”

Monsoor caught the majority of his fish this week doing exactly what the Mississippi River legend is known for – throwing a swim jig. His jig of choice this week was a white Humdinger Tom Monsoor swim jig with a 3½-inch Yamamoto Swim Senko (pearl with silver flake). Monsoor also mixed in a homemade football-head jig with a Yamamoto Cowboy trailer and a homemade Bitsy Bug-type jig with a Fat Baby Craw to put together his winning limits.

“I caught two or three fish this week on the Bitsy Bug, but other than that everything came on the football jig and the swimming jig,” Monsoor said. “Gravel bars and drops with weeds seemed to be the two key areas this week.”

Now that the 71-year-old pro has finally earned the big win at home that had seemed to elude him for most of his career, he plans to spend a relaxing Sunday right where you’d expect to see him – back out on the water.

“I can’t wait to go out there tomorrow and see if those two schools of largemouth that I had found in practice are still there,” Monsoor went on to say. “I’m going to sleep in until 9 a.m. or so and recuperate, then I’m getting back out there.”

The top 10 pros on the Mississippi River finished:

Overall there were 46 bass weighing 102 pounds, 15 ounces caught by pros Saturday. Nine of the final 10 pros weighed in five-bass limits.

The Tackle Warehouse Pro Circuit at the Mississippi River presented by OPTIMA Batteries was hosted by Explore La Crosse. The event featured a field of 200 anglers from FLW and Major League Fishing competing for $1.3 million.

In Tackle Warehouse Pro Circuit Super Tournament competition, the full field of 200 pro anglers competed in the two-day opening round on Wednesday and Thursday. The top 50 pros based on their two-day accumulated weight advanced to Friday. Only the top 10 pros continued competition on Saturday, with the winner determined by the heaviest accumulated weight from the four days of competition.

MLF pros competing in the Pro Circuit Super Tournaments fish for prize money only. No points will be awarded toward any championship or title to MLF competitors. Only the original Tackle Warehouse Pro Circuit anglers will compete for the AOY title throughout the remainder of the season. AOY points in the final events will be awarded based on Pro Circuit anglers finishing order. The top-finishing FLW pro will receive “first-place points” regardless of where he finishes in the overall standings, and so on.