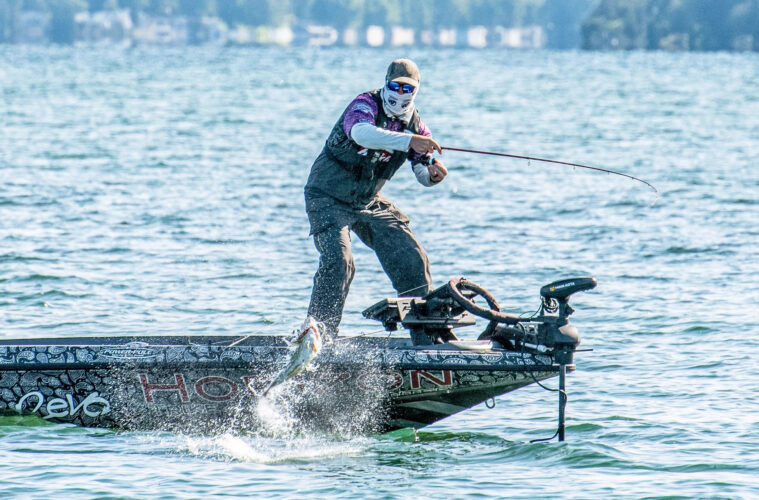 MASSENA, N.Y. – On the hunt for his first major title of his career, pro Joey “Cowboy” Cifuentes of Clinton, Arkansas, extended his lead on Day 3 of the MLF Tackle Warehouse Pro Circuit Presented by Bad Boy Mowers, Savage Arms Stop 6 Presented by Abu Garcia at the St. Lawrence River on Saturday. Dropping his second 24-pound-plus bag of the event on the scales on Day 3, Cifuentes weighed in 24 pounds, 2 ounces, to move his three-day total to 67 pounds, 5 ounces – a staggering 6-pound, 12-ounce lead over pro Cody Pike of Powhatan, Virginia, who ended the day in second place with a three-day total of 60 pounds, 9 ounces.

Day 1 leader Berkley pro John Cox of DeBary, Florida, moved from 15th place into 7th to secure his spot in the Top 10 after Day 3, while General Tire pro Skeet Reese of Auburn, California made the biggest jump from 30th place into 5th, weighing 24 pounds even, to bring his total to 58 pounds, 8 ounces going into Championship Sunday.

“This is unbelievable,” said Cifuentes. “I don’t even know what to say. I’m in hog heaven as we say in Arkansas.”

Cifuentes said surprisingly enough, he didn’t make a single cast where he caught his weight the previous two days. While he had been fishing deep humps near Frontenac, Cifuentes said he decided to expand into some new water near Clayton – the first spot produced a 6-pound smallmouth and his day took off from there.

“I hadn’t fished shallow all week, but after that big one I decided to try it and went to a shallow spot I’d found in practice,” said Cifuentes. “I caught a pair of 5-pounders, then went back out deep and caught a 3-pounder and a 2.5-pounder.”

Having a solid limit, Cifuentes said he gassed up to run back toward check-in, leaving him plenty of time to fish his way back. He was rewarded near takeoff with 4- and 3-pounders to pad his lead even more.

After a solid day where both shallow and deep fishing worked across the river, Cifuentes said he is eager going into Championship Sunday.

“I’m so excited but I’m also nervous,” said Cifuentes. “I’ve never been in this situation before, where I am leading going into the final day. The 6-12 lead is a nice cushion for error if I struggle. But I just plan to go out and go fishing. Whatever happens, happens. I’ve had a blast.”

The top 10 pros advancing to the final day of competition Sunday on the St. Lawrence River are:

Anglers were also vying for the prestigious 2021 Tackle Warehouse Pro Circuit Angler of the Year (AOY) title that is determined by the most points accumulated over the six Pro Circuit events in 2021.

Pro Michael Neal of Dayton, Tennessee, clinched the 2021 AOY title Saturday, after bringing in a limit of 18-8 and ending the day in 11th place. Neal held a 21-point lead over General Tire pro Skeet Reese of Auburn, California coming into the event, so despite Reese weighing 24 pounds Saturday to make the Top 10, Neal will bring the coveted trophy back to East Tennessee. Neal will receive his entry fees paid for the entire 2022 Tackle Warehouse Pro Circuit season for his win.

Pro Clabion Johns of Social Circle, Georgia, clinched the Polaris 2021 Rookie of the Year (ROY) award on Friday, which is awarded to the rookie pro angler who finishes the season with the highest point total. For his efforts, Johns won a Polaris Ranger 1000.

Overall, there were 232 bass weighing 777 pounds even caught by 50 pros Saturday. The catch included 39 five-bass limits.

The MLF Tackle Warehouse Pro Circuit Presented by Bad Boy Mowers, Savage Arms Stop 6 Presented by Abu Garcia at the St. Lawrence River is hosted by the Town of Massena.

In Tackle Warehouse Pro Circuit competition, the full field of anglers competed in the two-day opening round on Thursday and Friday. The field was cut to 50 anglers on Saturday. Now, the top 10 pros based on their three-day cumulative weight advance to Sunday where the winner will be determined by the heaviest accumulated weight from all four days of competition.

The final 10 anglers will take off at 6:30 a.m. ET on Sunday from the Massena Intake Boat Launch located at 1415 State Highway 131 in Massena.  Weigh-ins will also be held at the boat launch Sunday at 3 p.m. Fans are welcome to attend the event or follow the action online through the MLF NOW! live stream and coverage at MajorLeagueFishing.com.

The MLF Tackle Warehouse Pro Circuit Presented by Bad Boy Mowers, Savage Arms Stop 6 Presented by Abu Garcia at the St. Lawrence River will feature live on-the-water coverage and a two-hour action-packed television show that will premiere on the Outdoor Channel on Sunday, Sept. 1 from 7 to 9 a.m. ET and re-air on the Sportsman Channel this fall. Weigh-in will be streamed and fans can catch live on-the-water action all day Sunday, August 1 on MLF NOW! beginning at 7 a.m. ET at MajorLeagueFishing.com.