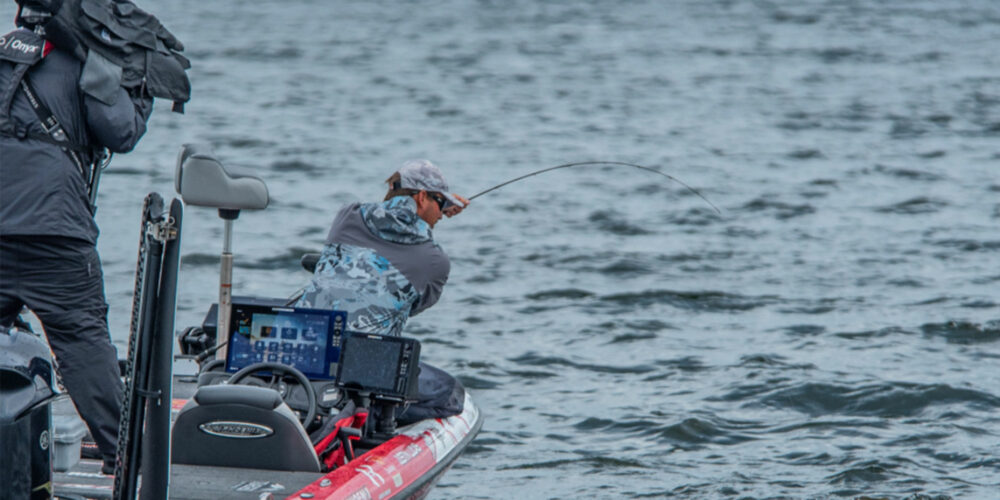 July 10, 2020 (Sturgeon Bay, Wisc.) – Major League Fishing (MLF) kicked off the Covercraft Stage Five presented by Abu Garcia, the final stage of the 2020 Bass Pro Tour, today on the Wisconsin waters of Lake Michigan with high-paced action. At the end of Period 3, the Berkley Pro Team sat in the Top 3 places after catching a combined total of 384 pounds of scorable smallmouth. First-place finisher, Justin Lucas tallied 141 pounds, 9 ounces on 50 fish collecting two MLF records in the process for most weight in a single-day of competition and most weight in one period. At day’s end, first and 20th places were separated by 112 pounds. Eighty-nine days after undergoing brain surgery, Aaron Martens returned to competition today finishing in 12th place. Group B takes to the water tomorrow for their first day of Qualifying Round.

Berkley pro Justin Lucas opened strong with 78 pounds, 12 ounces at the end of Period 1, an MLF Bass Pro Tour record for most weight caught in a single period. Jacob Wheeler held the previous record with 55 pounds, 9 ounces set on the 2019 Bass Pro Tour. Period 1 started strong for Lucas, who caught 29 fish in 150 minutes, averaging one scorable bass every five minutes before 10:30 a.m. His pace only slowed slightly as he recorded another 70 pounds, 13 ounces to the day with a second MLF record: most single-day weight in Bass Pro Tour competition.

“Two records in the books; we’ll see how long that lasts, there are a lot of fish out here off Sturgeon Bay,” said Lucas. “I’m fired up to come back out here but I’m not expecting that spot to pay off again, which is why I pounded it hard today – all on a Berkley.”

Lucas caught the day’s load on a Berkley MaxScent Flat Worm. The second- and third-place finishers also relied on a drop-shot rig with Berkley soft plastics.

Arizona resident Josh Bertrand overtook Scott Suggs late in Period 3 to finish in second place with 123 pounds, 3 ounces on 40 fish. Bertrand caught the bulk of his weight midday with 17 fish for 50 pounds, 5 ounces in Period 2.

“I started out slow,” said Bertrand. “But it was a really good day. I caught each one on a drop-shot. Anytime you come up North you want to bring a flat worm.”

Suggs spent most of the day on the heels of Lucas, including closing Lucas’s lead to only four pounds at one point. He caught only three fish in the final period after landing the day’s Berkley Big Bass (a 5-6 smallmouth) at the end of the second period. With a one-day scorable total of 119-4 on 33 bass, Suggs sits only 22 pounds out of the lead behind Bertrand and Lucas. Three anglers over 100 pounds after the first day of competition left Suggs chuckling to MLF NOW! viewers at lines-out.

“To catch over 100 pounds of (scorable) bass and be in third place – that’s crazy! But that’s what kind of fishery we’re on,” exclaimed Suggs. “I go to a lot of tournaments thinking that I’ve got the fish found and today they were there; it was a fun day.”

Using the same Berkley MaxScent Flat Worm as fellow Berkley pro Justin Lucas, Suggs shared some insight on a weight strategy that paid off in the Great Lakes, post-spawn today.

“I was fishing a quarter-ounce lighter than what you would think,” Suggs told fans during the General Tire Takeout postgame show. “The fish seem to be suspended offshore so, as the bait falls in slower, they can get up and bite it in the fall.”

The field of 40 pros caught 553 scorable (2 pounds or greater) bass for a single day total weight of 1,649 pounds, 2 ounces in this event hosted by Destination Sturgeon Bay. Kelly Jordon finished the day in 20th place 112 pounds behind the leader with 29 pounds, seven ounces. Fletcher Shryock, who entered the Stage in second place for season Points Championship behind Jordan Lee, ended the day in 18th place with 39 pounds, 6 ounces. Aaron Martens returned to competition today after missing Stage Four – Toyota Heavy Hitters presented by Venmo – due to treatment for brain cancer. Less than 90 days after undergoing brain surgery, Martens finished the day in 12th place with 52 pounds, two ounces.

Group A will return to the water on Sunday for the final day of their Qualifying Round. The winner of Group A will receive an automatic berth into Wednesday’s Championship Round and the bottom 20 will be eliminated based on their two-day total weight.

The competition continues Saturday when Group B takes to the water for the first day of their Qualifying Round, including current Season Points leader Jordan Lee and Stage One winner Jacob Wheeler.

Pending no weather delays, the day begins at Sawyer Park Boat Launch, Sturgeon Bay, Wisc., 6:15 a.m. CT when the field reports to pick-up their MLF official and camera operators before trailering to the ramp of his choice. With lines in at 8:00 a.m. CT, the competition consists of three, 150-minute periods.

Highlights from each Stage of the 2020 Bass Pro Tour air on Discovery Network beginning in July 2020 and Sportsman Channel in early 2021. Covercraft Stage Five presented by Abu Garcia will premiere as two, 2-hour episodes on Discovery Channel October 3 and 4, 7-9 a.m. ET/PT.