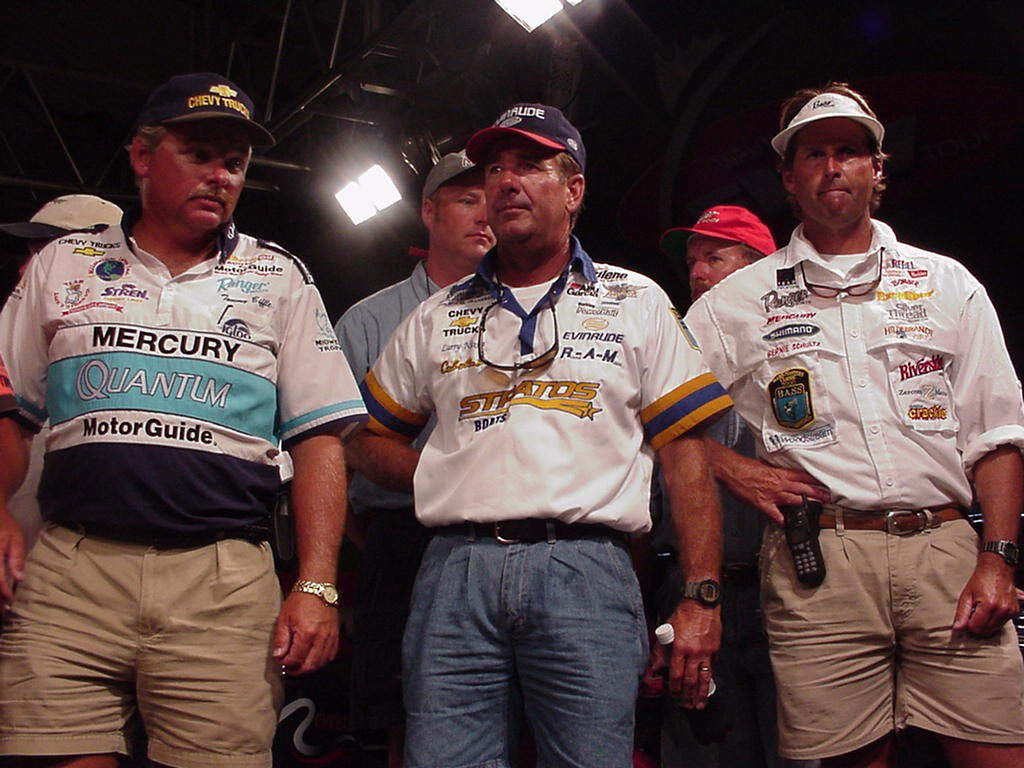 No kidding … “This is going to be one awesome field competing for this quarter-million dollars,” said Operation Bass’ Charlie Evans following day two’s weigh-in. As usual, Charlie was right on the money – or a whole lot of money, in a manner of speaking. The top 10 pros who made it into the second round today are a virtual who’s who of pro bass fishing – Bernie Shultz, Larry Nixon, Tommy Biffle, Darrel Robertson, Rick Clunn, Dion Hibdon, David Fritts, Carl Svebek, Rick Gasaway and Craig Powers – and it shows in the numbers. These 10 heavyweight anglers have combined for a total of $2,928,743 in career winnings on the Operation Bass tournament trail over the years. Among them, they also have a combined 75 top-10 appearances and 10 tournament victories.

Saving the best for last … Checking in at fourth place on the pro side today was a name familiar to the FLW Championship, Darrel Robertson. The Jay, Okla., native captured last year’s championship on Fort Gibson Lake in Oklahoma, and then he went on to win the Ranger M1 Millennium tourney at Cypress Gardens, Fla. Whereas he earned $850,000 for just those two tournaments combined, he has won merely $15,500 so far this year in six events on the FLW Tour. But Robertson is obviously a gamer when it comes to the big tournaments. In good position to vie for this year’s $250,000 championship prize, Robertson remembered last year’s huge wins. “That was sweet, wasn’t it?” he said.

Day-two doldrums … What a painful day it must have been for pro Paul Elias of Pachuta, Miss. With his whopping 18-pound, 4-ounce catch on the first day – over 2 1/2 pounds more than the next competitor – it looked like he was a cinch to make the cut. But he could only muster 4 pounds, 9 ounces today. His two-day total of 22-13 was just two ounces short of making into the second round. Said a shell-shocked Elias, “I think there’s one person in this tournament who really needs to say his prayers tonight.”

It was caught by a co-angler? … Congrats to co-angler Quinten Stacy of Bassett, Va., for hauling in the biggest bass on this year’s FLW Tour – a mark that is now official with the year’s final opening-round weigh-in today yielding no bass larger. He landed an 8-pound, 10-ounce whale at the third tour stop on Lake Murray, S.C., in March, but, according to him, it was more fluke than forte. The boat he was fishing from had lost its trolling motor, and he was just drifting with the wind and casting along a grass line. He hung the big bass with a Carolina rig, quite accidently, and reeled him in on 10-pound test line. “I thought I had a 5-pounder on, then when he jumped, I knew it was no 5-pounder,” Stacy said. “It goes to show you that when you think everything’s going wrong, you just can’t quit.” The bass netted him a $5,000 reward from Coca-Cola.

Casting Carl … When Carl Svebek III of Sam Rayburn, Texas, pulled his boat into the parking lot behind the FLW tent before weigh-in today, a keen observer noticed him pumping his fist in excitement. He had reason to. His 11-pound, 10-ounce catch bumped him up from 13th place yesterday into eighth place today. This is Svebek’s third top-10 appearance this year on the FLW Tour, and he was also one of 10 anglers to compete in ESPN’s Great Outdoor Games in June. For the affable Svebek, who has seen lots of television airtime this year, a good showing at this year’s championship is icing on an already pretty remarkable year. “It’s pretty exciting,” he said. “Until last year, I’d never even seen a TV camera.”

It just sounds cool, doesn’t it? … Even though he only caught 2 pounds, 3 ounces on day two and placed 46th for the tournament, co-angler Gary Henry of Conyers, Ga., said his lure of choice today was a “bass assassin.”

“I’m guaranteed to be in the top 10 unless the other guys weigh in.”
– Pro David Walker of Cannon, Ky., who was fourth to weigh his fish. He just missed, placing 14th.

“I forgot. It’s been so long between bites.”
– Co-angler Troy Pickett of Roberta, Ga., who only weighed in two fish, when asked what he was catching them on.

“That fish has got eye trouble. His eyes are too close to his tail.”
– Evans, describing one of the smaller bass that came across the scale.

“I don’t think so. Well, you never know. Yeah, I think so.”
– Pro Stephen Browning of Hot Springs, Ark., when asked by Evans if he thought he had enough weight to make the cut. He didn’t. He placed 12th.

Click for results, Thursday’s headline and other tournament news.