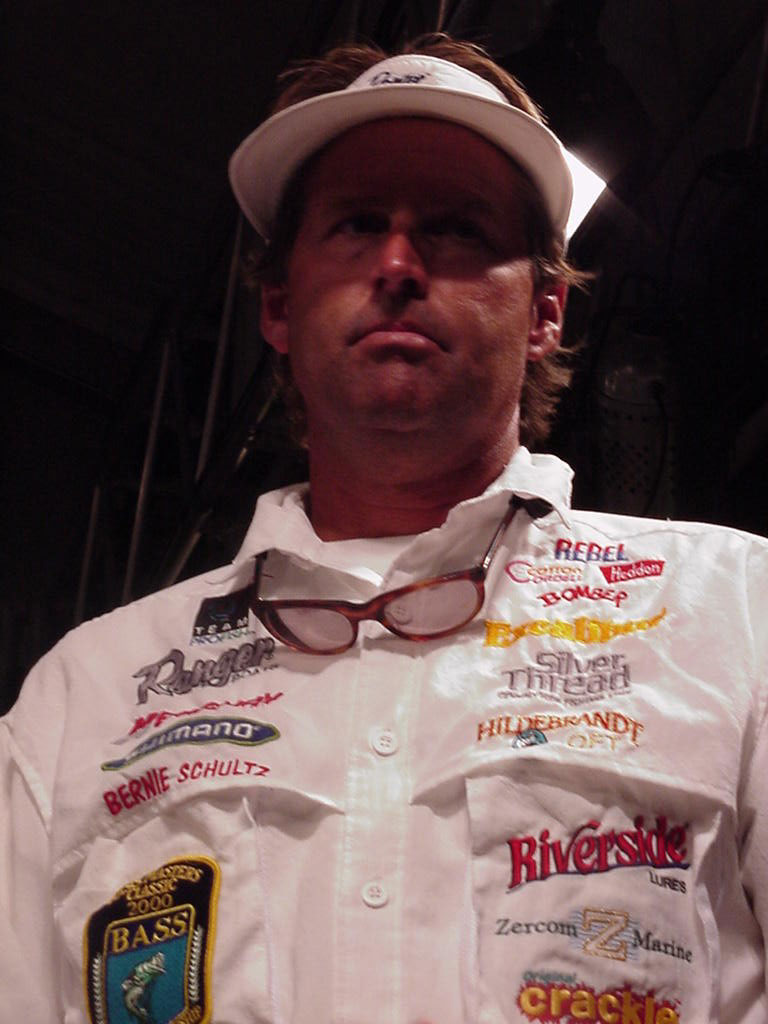 In one of the closest top-10 finishes in recent memory, Bernie Schultz of Gainesville, Fla., grabbed the overall lead in the Pro Division on the pivotal second day of the Wal-Mart FLW Tour Championship with a two-day total catch of 25 pounds, 13 ounces. Pro Larry Nixon of Bee Branch, Ark., finished in second place with a catch of 24 pounds, 14 ounces. Tommy Biffle of Wagoner, Okla. leapfrogged from 22nd place to third overall in the pro standings with a two-day catch of 24 pounds, 13 ounces.

Although there was nearly a 7-pound difference between the top 10 pro anglers after day one, only 2 pounds, 14 ounces separated the top-10 finalists after Thursday’s competition – making it one of the tightest championship groupings in years.

Schultz, who moved up from second to first place on Thursday, agreed that the $250,000 championship prize is up for grabs due to the competitive nature of the remaining field.

“It feels great to be in this position, but the fact of the matter is that we all start over tomorrow,” said Schultz, referring to round two, where everyone starts over at zero. “I’ve got myself in position to win, but there are a lot of great anglers and this is a really tough field. Tomorrow is going to be an anxious day.”

However, the big story of the tournament thus far might very well be the angler who didn’t make the top 10 at all. Despite catching 18 pounds, 4 ounces on the first day of competition, opening-day leader Paul Elias of Pachuta, Miss., only managed 4 pounds, 9 ounces on day two – a result which dropped him out of the top 10 in the Pro Division by a mere two 2 ounces. Elias finished in 11th place.

“I really feel bad for Paul,” said Carl Svebek, who finished eighth overall in the Pro Division with a two-day catch of 23 pounds, 3 ounces to advance to Friday’s round of 10. “It’s tough. But it just goes to show you that anything can happen. This is a very tough sport.”

In the Co-Angler Division, opening-day leader Tom Hunley of Stamping Ground, Ky., maintained his grip on first place with a two-day catch of 18 pounds, 3 ounces – easily outdistancing his competition for a second consecutive day.

“It feels good to be here, but anything can happen tomorrow,” said Hunley. “I need this tournament bad. I need it so bad I can taste it. But there are a lot of other guys just as hungry as I am. I’m just going to get some rest and do a lot of praying.”

Marc Levesque of Waterbury, Conn., maintained his hold on second place in the overall standings in the Co-Angler Division with a two-day catch of 15 pounds, 9 ounces.

“It’s great to be here. It’s a national tournament and there’s lots of great competition,” said Levesque, who qualified for the championship during the very last FLW tournament of the year in Florence, Ala. “But I’m a low-key guy and I know that I have my work cut out for me. I’ve been practicing hard, I’ve braved the heat and I just need to keep on going. This is truly and endurance sport. And hopefully I’ll be there in the end.”

Pros gear up for crunch time

Although the remaining anglers believe the competition is tough, all have their eyes on one thing – the $250,000 first-place prize.

“My goal is make the top five tomorrow,” said Nixon. “I know where the fish are and they are big enough for me to win. They just have to bite. If they do, I think I can win this thing.”

Svebek, who placed fifth overall in the ESPN Great Outdoor Games bass fishing competition last July, says he plans on running a good 70 to 80 miles tomorrow in the hopes of taking the next big step to Saturday’s final.

“I was sweating it out today but I’m tickled to death to be in my first top-10 FLW Championship,” Svebek said. “I have a spot a long ways away that I’m planning to use. I had success there about 8 years ago and I hope it comes through for me again.”

Friday’s weigh-in is scheduled to take place at 5 p.m. under the FLW tent in the Wal-Mart parking lot. Saturday’s 3:30 p.m. championship weigh-in will be broadcast live in Wal-Mart stores throughout the country.