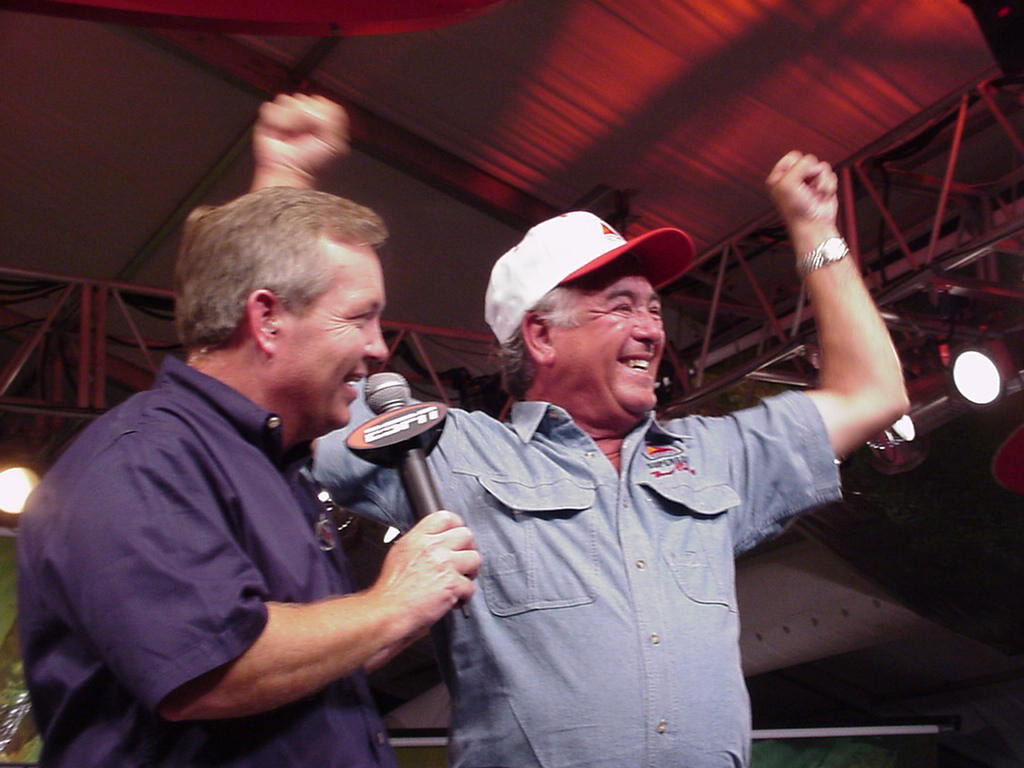 SHREVEPORT, La. – Despite battling a nasty flu bug throughout the entire tournament, co-angler Homer Stephens of Noblesville, Ind., lapped the competition on the tournament’s final day – recording a final weight more than double his nearest competitor – and easily walked away with one of the most coveted prizes in all of professional bass fishing – the FLW Championship title.

Stephens, who battled gamely through his illness all week, recovered well enough on the final day of competition to record an impressive catch of 9 pounds to take home the prestigious FLW first-place trophy and a $25,000 check.

He also won a year’s supply of gasoline from Citgo – the presenting sponsor of the FLW Championship.

“It’s pretty awesome,” Stephens said. “It took a lot of hard work, a lot of practice, a lot of cold medicine and a lot of junk food, but I did it. I had some really good fish. And when you have that, good things usually happen.”

Although Stephens said the prize money was nice, he said the feeling of being a champion was worth a whole lot more.

“It’s just a great sport,” he said. “I’m not in this for the money. It’s nice. But that’s not why I’m here. I just love to fish. I enjoy the people and I really like the competition. This is what it’s all about.”

Tommy Szwankowski of Hope, Ark., finished second with a catch of 4 pounds, 4 ounces for a $7,000 second place prize. Ken Golub of Pittsford, N.Y. earned a $5,000 third-place check for his catch of 3 pounds.

Tom Hunley of Stamping Ground, Ky., who led the Co-Angler Division throughout the entire tournament until the final day, recorded no fish during the championship round and finished in ninth place. However, he said his spirits were still high despite his tough luck.

“I just had a bad day today,” he said. “But the food was great and the people were great. I’m thinking of moving down here if I could only get the Kentucky Wildcats (Hunley’s favorite sports team) to relocate.”

Larry Nixon appears to be peaking at just the right time.

After climbing from fourth place to second during Thursday’s top-10 cutdown, Nixon managed to eek out a hard-fought first-place finish in the crucial day-three standings with a catch of 11 pounds, 4 ounces. Nixon, of Bee Branch, Ark., edged out second-place finisher Tommy Biffle of Wagoner, Okla., by 11 ounces. Darrel Robertson of Jay, Okla., finished in third place with a catch of 10 pounds, 7 ounces – only two ounces less than Biffle. In fact, after the end of the Friday’s competition, the pro grouping was so close that less than two pounds separated all top-five finalists.

“I think the championship is up in the air right now,” said Nixon. “This is where I wanted to be, but these guys are so good that any one of us could win it. I’m just going to grit my teeth and give it my all tomorrow.”

Biffle agreed that getting into the top-five was an achievement in and of itself.

“It’s a pretty good trick just to make it to the final day,” said Biffle, who recorded a day-three catch of 10 pounds, 9 ounces. “If the wind doesn’t blow really hard tomorrow and the weather doesn’t change, I think I have a pretty good shot. But the competition is real tough.”

Robertson said the level of competition was so intimidating that he didn’t want to even think about it while he was out on the river.

“I just had to concentrate on catching bass,” Robertson said. “If I had to think about who I was fishing against, I probably wouldn’t have caught a fish.”

Dion Hibdon of Stover, Mo., was in fourth place at the end of day three with a catch of 10 pounds, 6 ounces.

“Two hundred and fifty thousand dollars (first prize) is a lot of inspiration to work hard,” joked Hibdon of his motivation to date. “So far I’ve fished really clean and have had a good tournament. I just need to keep it up.”

Craig Powers of Rockwood, Tenn., captured the last spot in the final five with a catch of 9 pounds, 9 ounces. Powers said he was excited just to be among some of the greatest fishing legends of all time.

“I hated to see the (co-angler) competition end because I was able to sit out there (and wait) with a bunch of legends,” he said.

Clunn, one of the favorites heading into the tournament, said he didn’t feel comfortable throughout the week.

“I know the kind of water the bigger fish were in, but I just didn’t find enough of that water,” said Clunn. “I also didn’t practice as well as I should have and that hurt me. I’ve been kind of puzzled (by the fish) over the last two days.”

The FLW Championship weigh-in will take place tomorrow in the Wal-Mart parking lot on Westport Avenue off Pines Road in Shreveport at 3:30 p.m. However, fans unable to attend the weigh-in can view it live at any Wal-Mart location in the country.