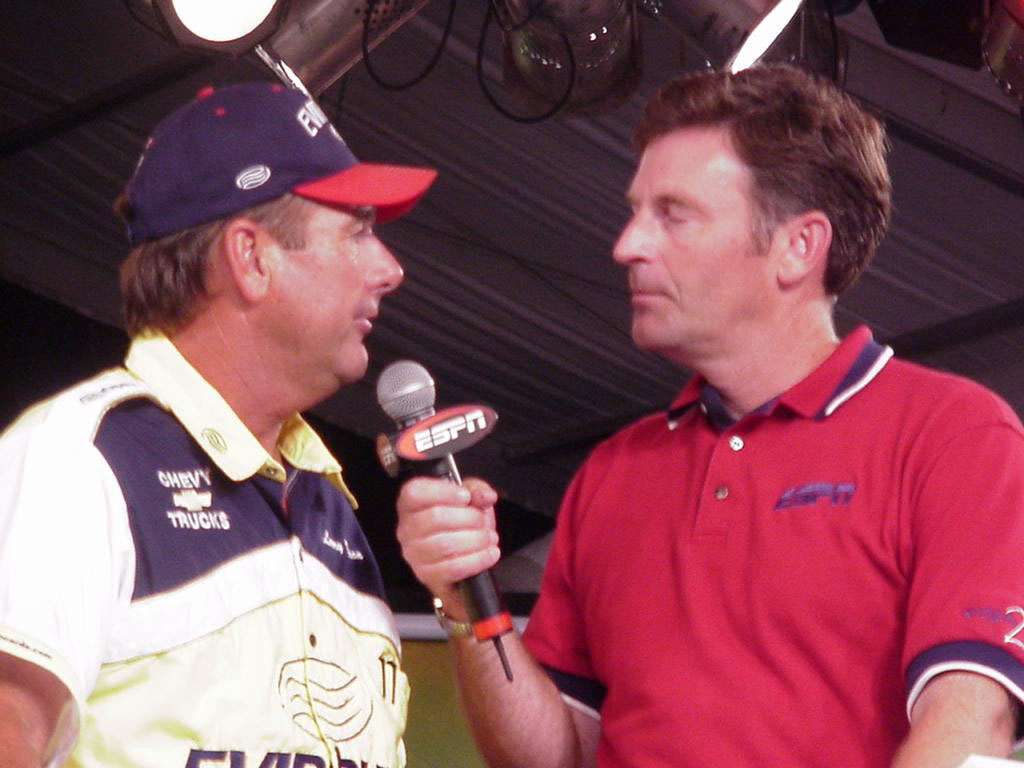 Fishing hard … Despite the all-star lineup in the second round of competition, catch weights were noticeably lower than usual for a championship-caliber bass tournament. Most anglers contended that the fishing was tough today and it showed in the numbers. The highest pro weight was 11-4, caught by Larry Nixon of Bee Branch, Ark., and the lowest pro weight to make the cut was 9-9 by Craig Powers of Rockwood, Tenn. Wind, hot, sunny weather and the season all contributed to the fishing difficulty today, as well as the whole week. Said Nixon, “It got kind of hard out there today. That wind was difficult.” Still, almost to a one, the finalists asserted that the Red River is a phenomenal fishery and they are looking forward to when the FLW stops here next May.

You just know he appreciates it … Following a tip from his fishing partner for the day, pro Carl Svebek III of Sam Rayburn, Texas, co-angler Homer Stephens of Noblesville, Ind., went to three different Wal-Mart stores to find “a certain plug” before today’s competition. Good thing he did. The giddy Stephens used the mystery lure to land five fish – including one monster – and win the Co-Angler Division with a weight of 9 pounds. The next closest weight to Stephens: 4 pounds, 4 ounces by Tommy Szwankowski of Hope, Ark.

Will a fish laxative take care of that? … Top-five pro finalist Dion Hibdon of Stover, Mo., said he’s broken off one good fish every day of the championship. He hopes to land a few of them in the final round – and not just to help him win the tournament. Said Hibdon, “I need to catch them and get my lures back.”

Would you do it? After all, there is $250,000 on the line … It happens at a lot of tournaments: A boat breaks down and a fellow competitor stops to give the stranded anglers a ride into weigh-in. It happened again today when the boat carrying pro Rick Gasaway of Kennesaw, Ga., and co-angler Ken Golub of Pittsford, N.Y., gave out about 12 miles short of the boat ramp. Day-two’s pro leader Bernie Schultz of Gainesville, Fla., and his co-angler Tom Hunley of Stamping Ground, Ky., went out of their way to pick up their stranded competitors, helping them reach the weigh-in on time. What other individual sport with a quarter-million-dollar prize has one competitor helping another one to win?

445,300: Amount, in dollars, that pro Rick Clunn of Ava, Mo., has won on the FLW Tour this year following his eighth-place, $3,500 finish today. It is the tour’s single-season earnings record.

“First, I’d like to thank God for letting me catch the fish, and, second, I’d like to thank Coca-Cola and Operation Bass for paying me to catch it.”
– Co-angler Quinten Stacy of Bassett, Va., who won the Coca-Cola Big Bass of the Year award. His 8-pound, 10-ounce bass, caught on Lake Murray, S.C., last March, netted him $5,000 from the FLW Tour sponsor.

“I’m thinking about moving down here if I can get the Kentucky Wildcats to move down here.”
– Kentucky-native Hunley, describing how much he liked the Red River fishery.

“This is kind of like a legends tournament. I couldn’t think about it or I wouldn’t have caught any fish.”
– Pro Darrel Robertson of Jay, Okla., remarking on the all-star field of pro anglers in the second round.

Click for results, Friday’s headline and other tournament news.