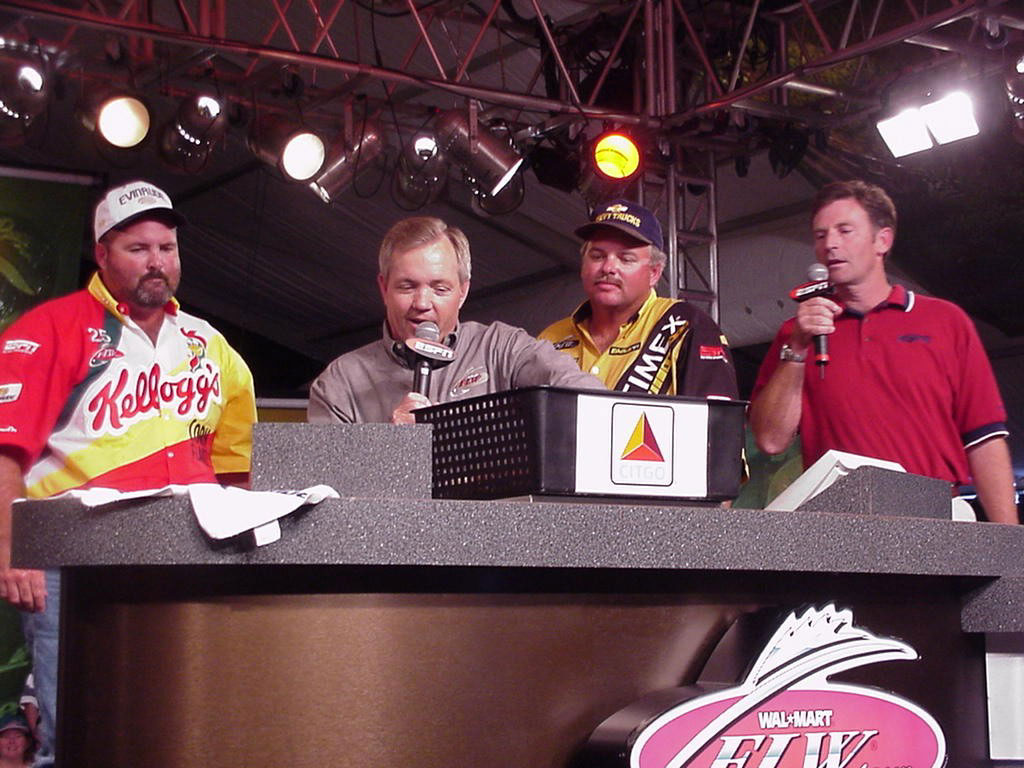 A true championship … As far as pro bass fishing championships go, it couldn’t have been any sweeter than today’s final round. Dion Hibdon, Tommy Biffle, Craig Powers, Larry Nixon and Darrel Robertson have combined for 35 top-10 appearances, 4 wins and $1,720,994 in career earnings on the Operation Bass tournament circuit. Said winner Hibdon, “This was as good a crew of guys this week as I’ve ever been around. Just to be onstage with these guys a great privilege.”

Better late than, well, just better late … Hibdon of Stover, Mo., admitted that he did not find his fish until just before the tournament started. After practicing five days, he didn’t locate his quarry until Monday – one day before competition began. Hibdon, the son of fishing legend Guido Hibdon, has his father to thank for his persistence. “If my father taught me one thing, it’s patience,” Dion said … Hibdon also has his father to thank for another thing: his lure. He said, in the two major events he has won, including today’s championship, Hibdon has fished his “favorite way”: throwing a jig in a current. In today’s final round he caught his winning fish using a Gambler Ninja jig with a Guido’s Original Crawfish trailer.

Terrible twos … What a heartbreak it must have been for Biffle, of Wagoner, Okla., to come in second – yet again – at an FLW Championship. This was Biffle’s third second-place finish at the championship in four years, his previous seconds coming in 1997 and 1998. To put it into perspective, a mere 13 ounces (see results) more and the $25,000 he received for second place would have increased tenfold to $250,000 for first place. Still, there’s no reason for Biffle fans to lose heart. With this year’s finish, he officially has more top-5 appearances in the championship than anybody else. Plus, he earned the Energizer Keeps on Going award for coming back from 22nd place on day one to make the final round. Said Biffle, “I didn’t miss any fish this week. It just wasn’t my turn.”

But he did get one … When Robertson, of Jay, Okla., worked his way into the final round today, it looked like the 1999 FLW Championship winner might just pull off another upset in a big tournament – his specialty. But Robertson came up short today with only one fish for 1 pound. Like many anglers in the tournament, the wily pro found the Red River to be just a bit too tricky. “I had no preconceived notions any day,” Robertson said. “When I went out this morning, I didn’t know if I could catch anything. It’s been that way all week.”

Mud in the eye … Yesterday’s leader Nixon was hoping windy conditions would help him in the final round, but he found it only made things worse. The wind had stirred up the water at his location, and he said that hurt his chances. “When I got there, the water was muddy. I hunted for fish three different times today,” he said. “Sometimes the fourth day will get you, and I got it.”

3 million: Number of Kellogg’s cereal boxes printed with Land O’Lakes Angler of the year Clark Wendlandt’s image on them.

“It’s the greatest compliment in the world that you guys come out here and watch us weigh in some silly fish. Without you all, this wouldn’t be possible.”
– Powers, addressing the enthusiastic capacity crowd at the weigh-in tent.

“Bernie Shultz told me that when you see the big N coming out of a creek, you know there’s fish up there.”
– ESPN’s Tommy Sanders, recounting a conversation he had with Shultz about Nixon. Shultz led after day two, but missed the final cut, and Nixon led after day three and placed fourth.