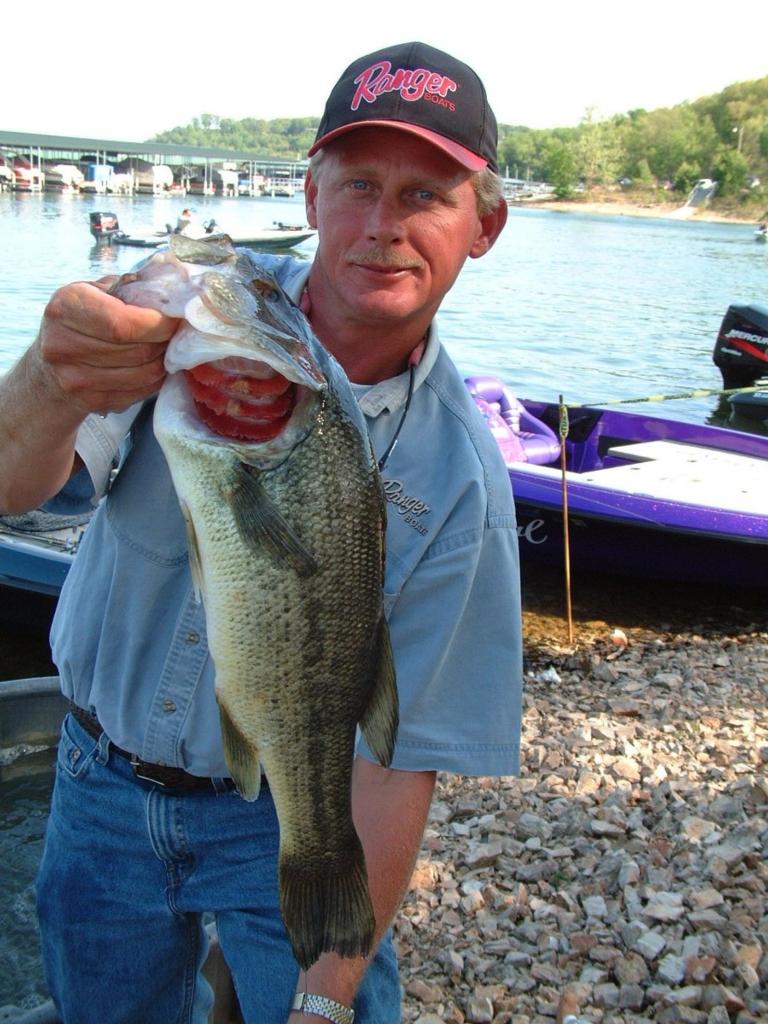 ROGERS, Ark. – Rick Gasaway of Kennesaw, Ga., used a 13-pound, 9-ounce catch to vault from 14th place to first in the Pro Division while capturing his second top-10 appearance on the FLW Tour. Gasaway, who netted his five-fish limit by 10 a.m. this morning, said he was ecstatic with his performance.

“This is just fantastic,” said Gasaway, who recorded a two-day total of 24 pounds, 9 ounces. “I wish it was the final day of the tournament, but so far, I’m really confident. I caught fish in three different areas and I have a few more spots to go to tomorrow. If the weather holds, everything should work out fine.”

Gasaway, who has opted to sight fish with a jig for the majority of the tournament, said the bass are continuing to move into shallow water.

“There are a lot of spawning bass near the grass and trees in about 3 to 4 feet of water,” said Gasaway. “If the fish continue to move up into shallow water and a cold front doesn’t move in, I know a can catch a five-fish limit tomorrow that should weigh about 10 pounds. If I’m able to do that, I really like my chances of making the finals.”

Gerald Swindle of Warrior, Ala., finished in second place heading into the semifinal round of competition after landing a five-fish stringer weighing 14 pounds, 9 ounces. However, despite his successful performance, Swindle believes the tournament is completely up for grabs.

“It feels great to be here, but it’s going to be a real shootout for the rest of the tournament,” said Swindle, who recorded a two-day catch of 24 pounds, 7 ounces. “Everybody in the top 10 is an excellent sight fisherman and that is really going to make for a wide open tournament. In my opinion, the guy who wins this tournament is going to be the guy who goes out the next two days with an open mind, looking for new areas that are holding a lot of fish. Someone is going to have to take a risk, because a lot of areas have dried up.”

Although Swindle would love to grab the $200,000 top prize, he said that he is making sure to keep everything in perspective.

“It’s really exciting,” said Swindle. “I’d really like to win this tournament, but it’s really nice knowing that no matter what happens, the worst I can take home is a $20,000 check.”

Keith Williams of Conway, Ark., won $1,250 and the day’s Big Bass award in the Pro Division after landing a 4-pound, 13-ounce bass.

Day-one co-angler leader David Hudson of Jasper, Ala., continued his strong showing at Beaver Lake with a respectful two-day catch of 15 pounds, 5 ounces – a feat good enough to hold onto the lead heading into tomorrow’s semifinal round. Hudson, who won the 2000 FLW Co-Angler of the Year award, said that he believes he has finally overcome the slow start that plagued him during the first few tournaments of the year.

“I had terrible tournaments at Okeechobee and Pascagoula, but I think I’ve finally regained my confidence level,” he said. “After my slow start this year, I decided to just go back home and start practicing all over again. I really learned a lot during that time and it looks like it’s starting to pay off.”

Hudson, who has used a Carolina rig and a finesse worm throughout the tournament, said that he understands more than ever just how important the mental aspect of fishing really is.

“You really need to have confidence in this sport,” he said. “A lot of people don’t understand this, but keeping a positive outlook is the key to fishing. If you go out onto the water thinking you’re not going to catch anything, you’re not going to succeed.”

Hudson said that versatility is another key for anglers fishing from the back of the boat.

“I have six different rods and I’m prepared for any situation that my pro partner puts me in,” he said. “And that’s important, because the pros are the ones who dictate when and how you’re going to fish.”

Although Hudson knows he will have little say about tomorrow’s fishing spots, he said he is feeling good about his overall chances.

“I’m feeling pretty confident right now,” he said. “Anytime you can make the top 10, it’s special. I think I’ll be able to make the adjustments I need to make and hopefully, I can make the finals.”

Fred Person of Memphis, Tenn., won the Big Bass award in the Co-Angler Division after recording a bass weighing 3 pounds, 3 ounces. Person won a $750 check for his efforts.

Tomorrow’s competition will begin at 8 a.m. April 27 at Prairie Creek Park in Rogers. Weigh-in is scheduled for 5 p.m. at the Rogers Wal-Mart located at 2110 West Walnut. Immediately following the weigh-in, country singer Kenny Chesney will perform a free concert live from the Wal-Mart parking lot. The concert will be broadcast nationwide over the Wal-Mart Television network starting at 7:30 EST.