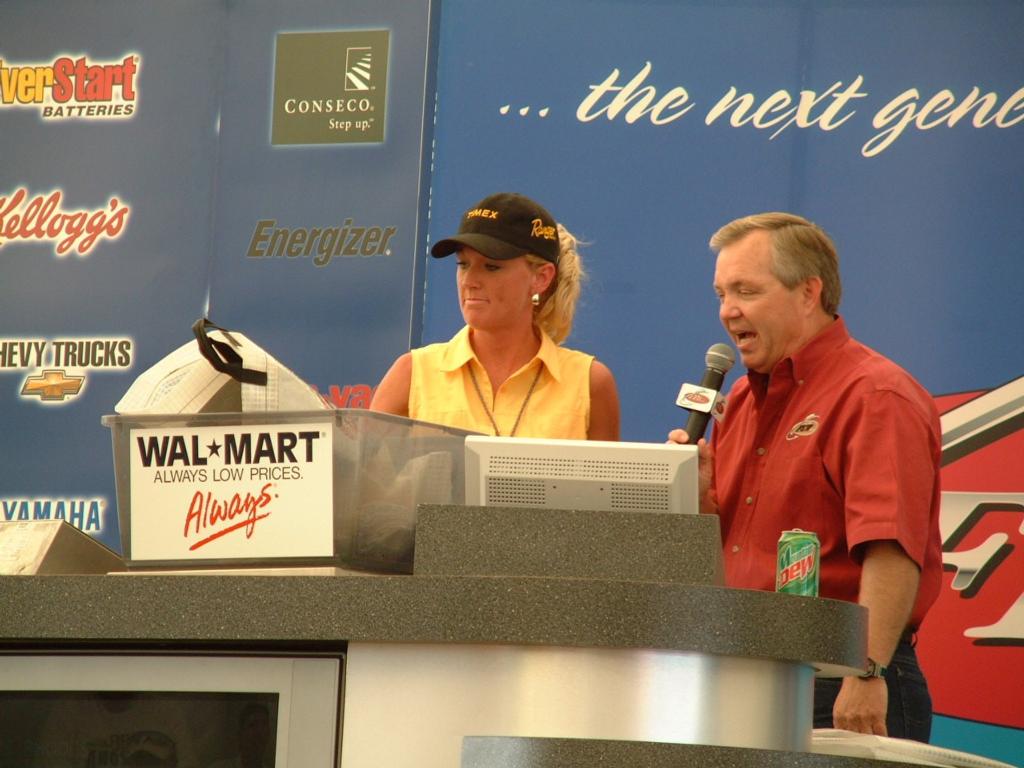 Kristie Rhodes of Bixby, Okla., was one of 10 women to compete in the Co-Angler Division at Beaver Lake. She finished in 21st place after the opening round. Photo by Jeff Schroeder. Angler: Kristi Rhodes.
April 26, 2001 • Jeff Schroeder • Tackle Warehouse Pro Circuit

6: Percentage of this tournament’s Co-Angler Division who are women. Of 169 co-anglers who registered weight in the opening round, 10 of them were women. The highest finisher of the ladies movement this week was Kristie Rhodes of Bixby, Okla., who placed 21st on the co-angler side.

There seems to be an alarming trend of costly penalties being incurred by contending anglers this year on tour. Most infamous so far was the disqualification of pro Johnny McCombs of Morris, Ala., at the Pascagoula River, Miss., event in February for a late return to the final-round weigh-in. The gaffe cost him the tournament and $100,000 (which I’m sure he’s tired of hearing – apologies, Johnny). Today, two anglers who otherwise had enough weight also missed the cut due to penalties.

Frank Divis, a local favorite from Fayetteville, Ark., practically owns Beaver Lake on the co-angler side. Last year, he placed 10th at the EverStart event here and sixth in the FLW tournament here. In 1999, he won the EverStart Beaver Lake contest.

“I said last year I was going to win this thing,” he said.

So it was no surprise to see him bring in a big sack of fish today and poised to jump from his 25th-place performance on day one again into the top 10. Unfortunately for him, he brought in his fish three minutes past his check-in time, giving him a 3-pound penalty.

Shortly before weigh-in, he and pro partner Shad Schenck of Waynetown, Ind., pulled up a few hundred yards outside of Prairie Creek Marina to squeeze in a few last-minute casts. When time came to head in, Schenk’s boat motor wouldn’t start again. Fellow competitors eventually hauled them in, but it was three minutes too late. Each angler was penalized a pound per minute. Divis – who caught one of the biggest co-angler stringers of the day with 8 pounds, 3 ounces, giving him an actual two-day total of 13-13 – was bumped down to 10-13. In the Co-Angler Division, 13-13 would have landed him in third place for the opening round and qualified him to fish the co-angler finals tomorrow. Instead he finished the tourney today in 18th place.

“I’m not going to blame Shad. It’s not his fault,” said Divis afterwards. “There was something wrong with the battery that he had no control over. There’s no use whining or crying about it.”

Coincidentally, in the Pro Division, another 18th-place finisher missed the cut due to tardiness. Allen Armour of Norcross, Ga., pulled in with a two-day actual total weight of 22 pounds, 4 ounces, which would have landed him in sixth place and sent him into the semifinal round. However, he was penalized 2 pounds in the opening round because he showed up late to tournament registration on Tuesday night. With only 20 pounds, 4 ounces, he was relegated to 18th place. “I kind of screwed it up,” he said yesterday. “Yeah, I have a little mountain to climb.”

Then there was the case of Kelly Greer of Green Forest, Ark., who weighed in the heaviest stringer today in the Co-Angler Division with 9 pounds, 2 ounces. Inexplicably, however, he slept in yesterday and presumably missed his ride onto Beaver Lake. He zeroed on day one. Still, his one-day weight allowed him to finish in the money in 36th place.

Back in the hunt … A quick glance at the opening-round Pro Division top-10 list reveals two familiar names to the Wal-Mart Open: second-place Gerald Swindle and fifth-place Clark Wendlandt. In 1998 Swindle, of Warrior, Ala., won this FLW event. Texas’ Wendlandt, last year’s FLW Angler of the Year, won this event in 1999 and placed 10th here last year. The affable Swindle, who did battle with a stubborn downed tree to catch his biggest bass today, looks strong. He brought in the heaviest pro stringer of the day at 14 pounds, 9 ounces. “It’s been an unreal day, man,” he said.

… One former Wal-Mart Open winner who is notably absent from the semifinal-round qualifying list is Rick Clunn of Ava, Mo., who won here last year. Since last year’s FLW tourney at Beaver Lake in April, he has made the semifinals in six of eight tournaments and the finals in five of those tournaments, including two victories. Today Clunn, who came into this tournament in first place in the tour standings, finished in an uncharacteristically low 78th place. “The water here is just too clear for me,” he explained.

Leveled by sight … Clunn touched on what is turning out to be the key to this week’s tournament. The bass in the clear water of Beaver Lake are almost all in spawning mode and are situated very shallow on the banks. This is forcing many successful pros who are otherwise notorious for avoiding sight fishing to go “looking for them” – literally. That means deep-water crankbait kings like Clunn and South Carolina’s David Fritts, who are perennial winners on tour, are effectively fishing out of their element this week. The conditions have essentially been a great leveler, allowing sight-fishing specialists to come to the forefront and earn some substantial standings points for practically the first time this year. Almost to a one, the pro semifinalists all caught their fish by sight fishing on the spawning beds.

Hauling them in … While some powerhouse pro anglers struggled, like yesterday, many competitors actually capitalized on the abundance of spawning bass. No fewer than 124 five-fish limits were weighed in by pro competitors today, a number that fell just one below yesterday’s astounding mark of 125.

“Yeah, I do.”
– Pro leader Rick Gasaway of Kennesaw, Ga., when asked if he felt confident about his chances today.

“I think I’ll go turkey hunting.”
– Pro Denny Brauer of Camdenton, Mo., host of TV’s Bass Class, on how he plans to prepare for the next FLW tournament. Today Brauer finished in 153rd place.

“I think I’m going to fall a little bit short – but you know, that’s kind of my life story.”
– Pro Carl Svebek of Sam Rayburn, Texas – who stands, as he put it, “5 feet, 4 inches (tall) on a good day” – when asked if he thought he had enough weight to make the cut. He weighed in 18 pounds, 14 ounces over two days and finished in 34th place.