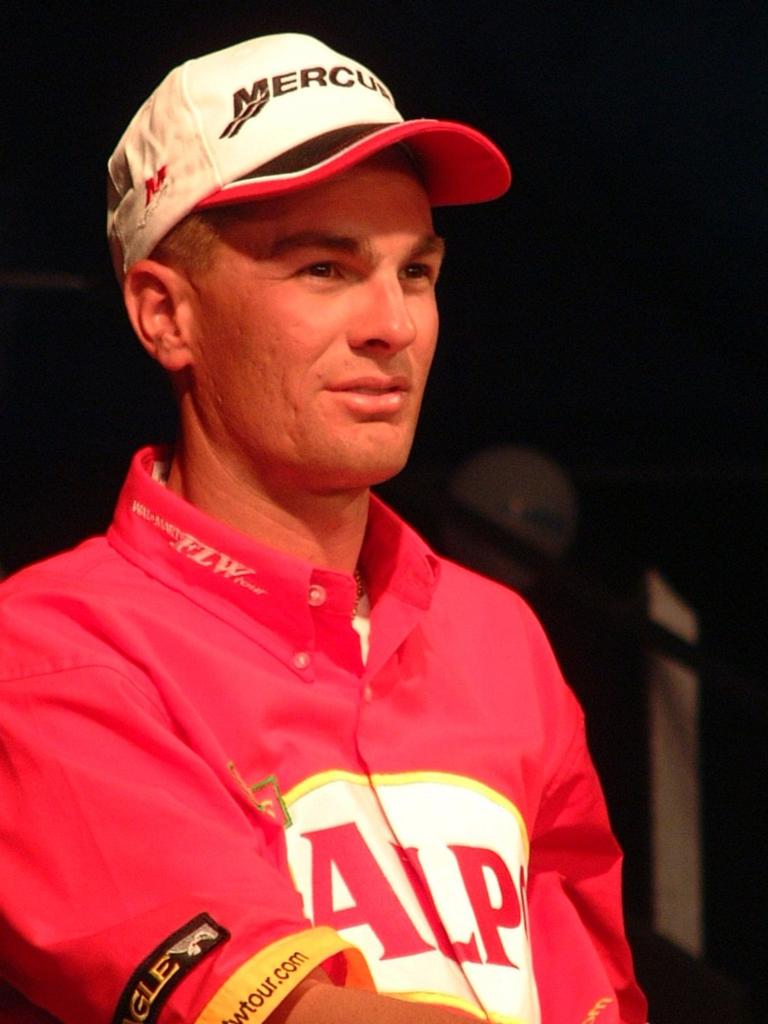 Pro Randy Howell of Trussville, Ala., was in first place heading into the final round of competition. Howell recorded a total catch of 11 pounds, 3 ounces in the semifinals. Photo by Gary Mortenson. Angler: Randy Howell.
April 27, 2001 • Gary Mortenson • Tackle Warehouse Pro Circuit

ROGERS, Ark. – If the competition were any closer, tournament officials would have to declare it a draw. With only 13 ounces separating the top-five anglers heading in the final day of FLW competition, Randy Howell of Trussville, Ala., emerged as the frontrunner with a total catch of 11 pounds, 3 ounces – a mere 6 ounces in front of second-place qualifier Wesley Strader.

However, if the pressure of fishing for the first-place prize of $200,000 wasn’t difficult enough, Howell suggested two more reasons to be increasingly apprehensive come tomorrow’s all-important finals.

“We have a baby on the way and my wife keeps telling me that I need to go out and win some money. She’s buying a lot of stuff,” said Howell, who has now qualified for his eighth top-10 and second top-five appearance on the FLW Tour. “And believe it or not, (third-place qualifier) Clark Wendlandt and I are sharing the same water tomorrow. It’s going to a great finals.”

Despite the pressure, Howell said he is happy to have made it this far.

“To tell you the truth, it’s a big relief to get here,” said Howell. “I feel good and I know where the fish are. I won’t have a (co-angler) partner in the boat tomorrow and I think I’ll be able to focus a little more. When I have a partner, I always want to make sure that they catch some fish. And sometimes that can take some time away from my own fishing. After all, I’m going for $200,000 tomorrow. I need to be focused.”

Although Howell knows he’s fishing against some of the nation’s greatest bass anglers, he said he has a secret weapon in store for the rest of the field.

“I have a 5-pound fish that I’ve been saving for awhile,” said Howell, who has been sight fishing throughout the tournament. “I’ll be shooting for that fish early in the morning. And if I catch it, I’ll spend the rest of the day trying to get my five-fish limit. If everything works out, I should be in great shape.”

Wesley Strader, fresh off a second-place finish at the EverStart tour event at Sam Rayburn earlier this April, hopes he can continue his magical tournament run in tomorrow’s finals.

“I’m tickled to death to be here,” said Strader, who recorded a total catch of 10 pounds, 13 ounces. “For me, this lake is a special place. I’ve been catching my limit in the first 30 minutes and using the rest of the day to cull my fish. If you catch a limit early, it really settles me down. My confidence is pretty high right now.”

Strader is a native of Spring City, Tenn.

Clark Wendlandt of Cedar Park, Texas, demonstrated yet again that his 2000 Kellogg’s FLW Angler of the Year award was no fluke. Using a catch of 10 pounds, 11 ounces, Wendlandt managed to grab the third spot in the standings heading into the final round of competition.

Lucky or not, Gerald Swindle of Warrior, Ala., managed a fourth-place finish with a catch of 10 pounds, 7 ounces.

“I’ve had a tremendously lucky week,” said Swindle, easily the most gregarious angler to make the top five. “I don’t pretend to be the best sight fishermen of the bunch, so I’ve got to feel pretty good about my performance. These guys are great fishermen. I think I was very fortunate today.”

Mark Pack of Mineola, Texas, grabbed the fifth and final spot in the finals with a total catch of 10 pounds, 6 ounces. Pack, who has continued to fish in deeper water than most of his counterparts, said he is sticking to the same strategy that he’s been using all week.

“I tried to fish the beds a little bit deeper than some of the other guys,” said Pack. “And I’m going to stick to that same game plan tomorrow. I’m just going to go fishing and see what happens.”

The final day of pro competition begins at 6:30 a.m. at Prairie Creek Park in Rogers, Ark.