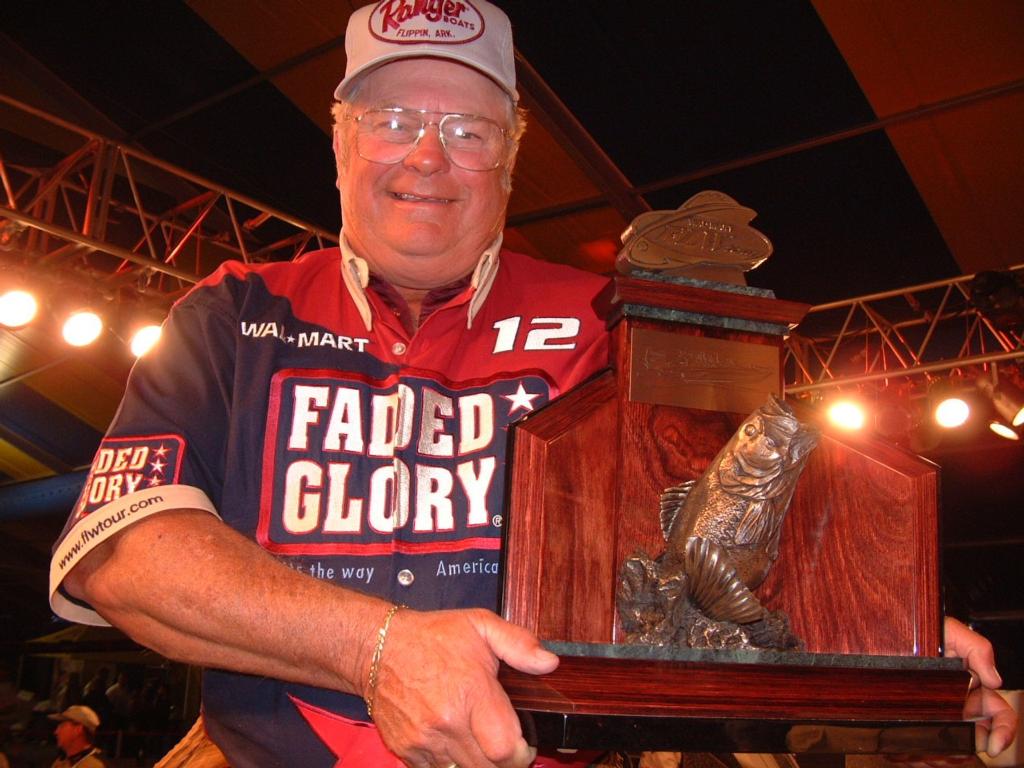 GALLATIN, Tenn. – As a seven-year veteran of the FLW Tour with six top-10 finishes to his credit, Basil Bacon of Springfield, Mo., has long been considered one of the best anglers to never have won an FLW Tour event – until today. Bolstered by a catch of 14 pounds, 2 ounces, Bacon out-dueled the likes of legendary angler Kevin VanDam as well eight other of the nation’s top pros to win the first FLW Tour event of his career.

Not surprisingly, Bacon was overjoyed to have finally gotten the proverbial FLW tournament monkey off his back.

“It’s just a wonderful thing,” said Bacon, one of the most respected elder statesmen of the tour. “It’s really a great feeling. I’ve won lots of tournaments over the years, but this is one of the biggest. Nothing will ever replace the feeling I had after my first win, but this is definitely one of the most gratifying experiences I’ve had.”

“When I showed up at my spot first thing this morning, the water was muddied up real good and I thought I was done,” said Bacon, who targeted largemouth bass on a combination of wood, rocks and grass. “But then I started moving around and eventually found some clear water close to the banks and everything started to come together. I wound up catching a limit by noon.”

Although Bacon was pretty certain that he was on the verge of winning his first FLW title by the time he returned to the weigh-in, his confidence suffered a huge blow as he brought the final fish to the scales.

“I knew I need about 3 pounds to win. But when I reached into the boat and pulled out my last fish, I realized that I didn’t save my biggest fish for last,” he said. “My guess was that I had about 15 pounds, but when I saw that fish, I thought I was in real trouble.”

For a few anxious moments, Bacon waited nervously at the scales as his last fish was weighed in. Finally, the announcement came – Bacon had won the tournament by a grand total of 3 ounces.

“It was a big relief,” said Bacon, who immediately hugged his wife upon learning of the victory. “It was a great feeling.”

A matter of ounces

For Pat Fisher, losing out to Bacon by three ounces represented one of the more bittersweet outcomes of his young fishing career. Although he eventually finished in second place and won more prize money – $40,000 – than any other tournament of his career, Fisher said he couldn’t help but wonder what might have been.

“I’m happy I made it this far and finally got on TV, but I’m still pretty bummed out right now,” said Fisher, who turned in a catch of 13 pounds, 15 ounces. “I really thought I had this tournament won. I had a limit by 6:15 a.m. this morning, but I wasn’t able to cull another fish the entire day. This has to be one of the longest days of my career.”

However, despite the heartbreak, Fisher said that it was important to keep everything in perspective.

“This was a super town, the people were nice, I learned a lot and I had a great week of fishing,” he said. “Basil has been fishing for a very long time and hopefully, I’ll be able to fish as long as he has. It’s only my second year on the FLW Tour as a pro and this is my best ever finish. So overall, I’m very happy.”

VanDam turns in yet another fantastic finish

Although Kevin VanDam has yet to win an FLW Tour event – one of the few national bass-fishing awards to elude him – the resident of of Kalamazoo, Mich., appeared to take today’s third-place finish in stride.

“I worked real hard at it today and I had a decent pattern, but I just couldn’t get that one big bite,” said VanDam, who now has four second-place finishes and one third-place finish to his credit on the FLW Tour despite only fishing in 12 FLW tournaments. “I had a great week, so I’m not complaining.”

VanDam, who ultimately won $24,500 in prize money after turning in a 12-pound, 9-ounce catch, also managed to solidify his first-place grip on the 2002 FLW Angler-of-the-Year points race. Barring a complete meltdown at the Lake Champlain tournament next month, VanDam – who now has a 28 point lead on his nearest competitor – will walk away with an unprecedented second-consecutive angler-of-the-year title.