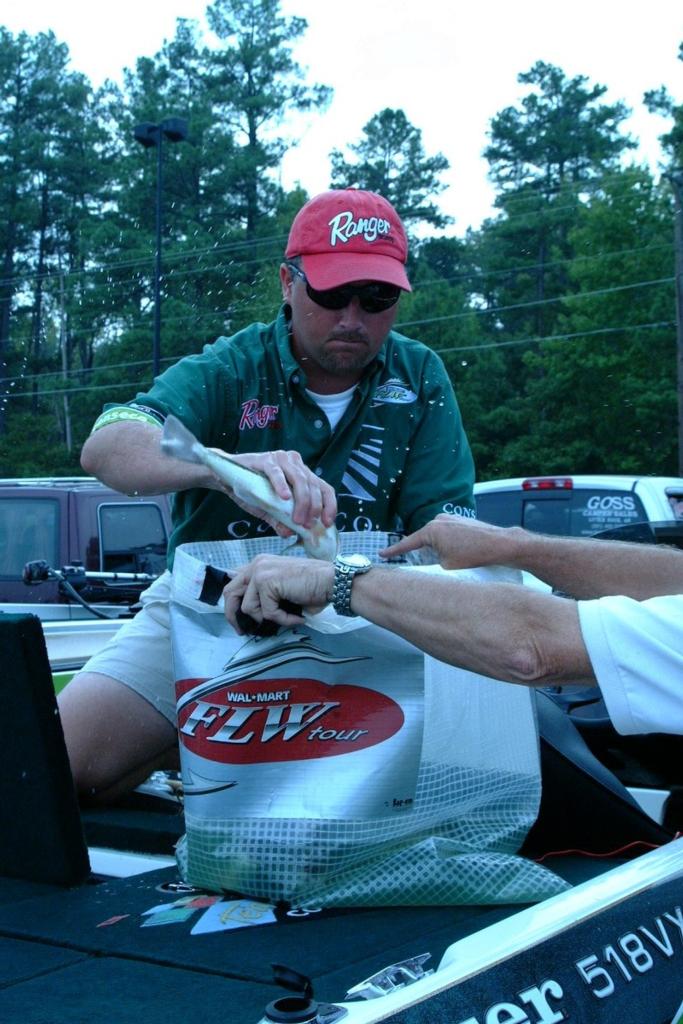 Tracy Adams of Wilkesboro, N.C., gets splashed by one of the bass he caught during the 2002 FLW Tour Championship on Cross Lake while removing it from his livewell. Photo by Patrick Baker.
September 12, 2002 • Patrick Baker • Archives

Like a scythe sweeping across the pages of a murder mystery, the fields of 48 pros and 48 co-anglers were each cut in half Thursday by the blade of bass-fishing proficiency. Day two of the 2002 Wal-Mart FLW Tour’s final destination on Cross Lake was do-or-die for the able anglers who qualified for the championship through outstanding performances during the prior six tournaments of the regular season.

Surviving co-anglers have their sights set on a first-place prize of $25,000 that will be awarded after Friday’s competition. But the hefty $260,000 first-place prize was undoubtedly weighing heavily on the minds of the top 24 pros who brawled through their bracket matchups and lived to fish another day on Cross Lake.

And with temperatures in the mid-90s and relative humidity hovering around the 90-percent mark, the heat had to get to the heads of some of these premier anglers as well. However, the oppressive heat presents nothing a cool quarter-million can’t fix. 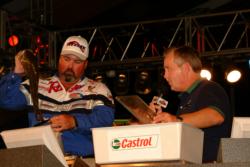 A random survey of pros who made the cut to fish in Friday’s semifinal showdowns yielded these insights into how $260,000 might be used:

On a serious level, Hibdon said he’s already had the pleasure of winning championships and champion-sized checks. He said, “But that’s not really what it’s all about. It’s more the prestige. It’s about being a champion.”

After mulling over the question a few more moments, Hibdon added, “Don’t get me wrong. Money’s nice.”

– Takahiro Omori of Emory, Texas, said he’d use the money to ensure the longevity of his professional fishing career.

“I’d save it in the bank,” he said. “I want to fish all the time, for a long time, so I’d be able to fish for about five years at least.”

– Greg Hackney of Oak Ridge, La., the angler with the heaviest two-day total, seemed a bit taken aback by the question. Admitting to being a bit superstitious, he said he didn’t want to risk putting the motor before the boat in case daydreaming about the future could invite the kiss of tournament death.

“We don’t even want to talk about that,” he said. “I’m just going to try to win tomorrow.”

– Wes Thomas of Hanover, Ind., said, “My son just started college … so you know where that would go.”

Thomas wouldn’t spend it all on his son, however, he’d make sure the ladies in his life were taken care of as well. 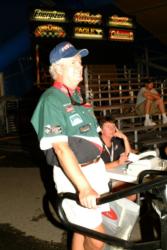 – Mike Wurm of Hot Springs, Ark., said he’d likely use the cash sensibly and even save some for retirement.

“I’d definitely put it to use. … I’ve got two kids in college, so we’d use it up pretty fast,” he said. Of anything left over after immediate education expenses had been met, he said: “I’d put it in the bank probably. I’d try to make it grow.”

– Tracy Adams of Wilkesboro, N.C., would spend it on a practical purpose: new digs.

The heat is on

Comments on how the heat affects fishing performance were more varied and seemed to be influenced at least partially by each angler’s native weather:

– Adams said the heat can definitely be a factor in a fisherman’s performance, especially if the angler isn’t used to high heat and humidity conditions.

“It’s tough,” he said. “You’ve got to try to stay hydrated and keep drinking Gatorade or whatever you can.”

– Wurm said hot, humid weather is common in his neighborhood – a bit south of Adams’ – and he said regular water is the best remedy.

“We’re more or less used to it,” he said. “It doesn’t really take too much of a toll if you just stay hydrated and keep drinking water. That’s all I drink out there.” 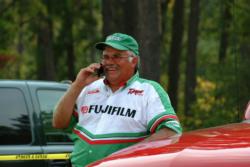 – Thomas wasn’t bashful about giving his opinion on ultra-sticky weather: He’s not overly fond of it when he’s on the water. He said constantly being exposed to the heat on the water during the last week manifested itself in a couple of wayward casts today.

“I just kind of got lazy. … I found myself not executing as well today at one point,” he said. Thomas told his co-angler today that he would have to sit down, “take a shot of Gatorade” and rejuvenate for a few minutes before he could get back on his game.

“It takes a little toll on you,” he said. “We say we’re used to it … but when you’re just sitting there and still sweating, it’s hard to get used to.”

(That’s another vote for sports drinks.)

– Hackney, on the other hand, thrives in the Louisiana heat, and his performance this week proves it. He said he works outdoors with his father when he’s not fishing, so current weather conditions are nothing new for him.

“Heat doesn’t really have much effect on me,” he said. “It’s really not all that hot this week … but the hotter the better. It’s better for fishing.” 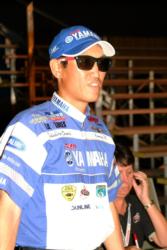 “Mentally, it gets hot; mentally, I’m losing it,” he said. “It’s very difficult to keep concentration on fishing.”

– Though Hibdon‘s home is located two states north of Louisiana, he said the heat hasn’t gotten to him during the tournament. The key is to keep hydrated by drinking “water or Gatorade or other fluids,” he said.

(That ties it up between water and sports drinks in terms of popularity, for the statisticians out there.)

Other anglers had a few things to say about day-two action during the FLW Championship having to do with topics outside the realm of money and weather:

– Scott Martin of Clewiston, Fla., said he spent the last two hours of the day looking for the key to his boat instead of fishing, which contributed to his being cut from the pro field. Sam Newby of Pocola, Okla., ended the day with his own key out of the bracket matchup and into the finals.

“I don’t know if I lost the key, if my co-angler threw it out, or if Sam Newby paid someone to throw it out,” Martin said.

– Andre Moore of Scottsdale, Ariz., said an alligator may have eaten the lunker he had been targeting in the area he chose to fish on Cross Lake. He said a woman by the lake said she had seen an alligator eat a beaver earlier and possibly Moore’s five-pound hope.

“Yeah, I got spanked pretty good on this lake. … There’s some alligator way out and back there,” he said, attributing part of fishless finish on the day to the animal. “I’m not used to fishing swamps.”

– Kevin VanDam of Kalamazoo, Mich., showed that perseverance can pay off when he registered more than double his day-one weight on Thursday.

“It’s hard work out there,” he said. “I fished a lot harder today. It can get frustrating, but you just have to keep working.” 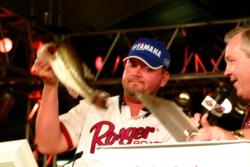 – Hackney praised the area and the lake that has been so bountiful for him this week. Though he had not fished Cross Lake before this tournament, he said it’s not that different from what he’s used to near the parts of Louisiana he calls home.

“I grew up on a place that looks just like this,” he said. “This is the way I like to fish.”

The 48 co-anglers weighed in a total of 54 bass, 52 of which were released alive. The overall catch weight on the co-angler side was 86-3, and none of them caught a limit.