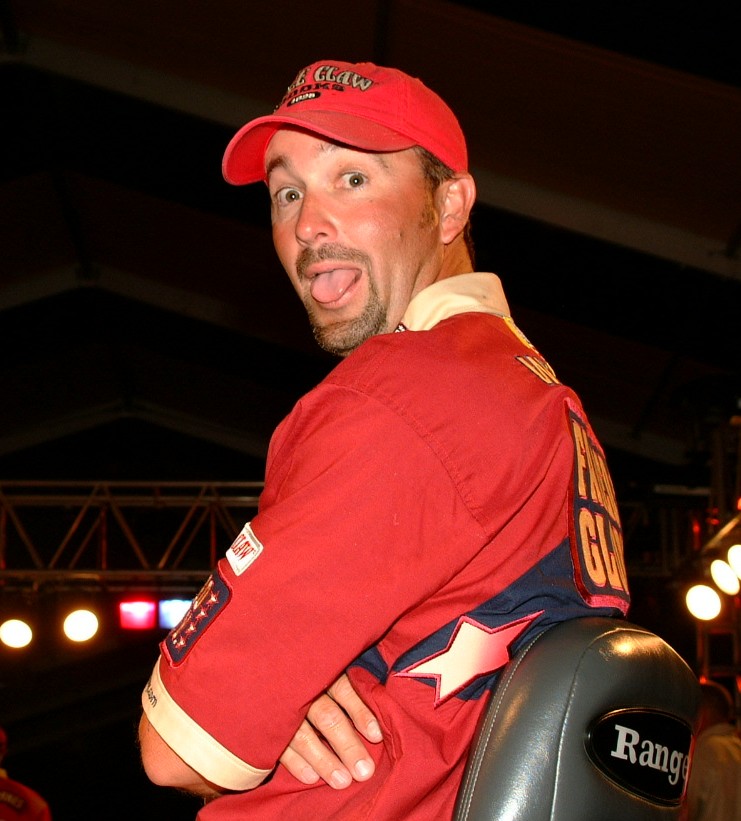 Gerald Swindle advanced to the finals of the Wal-Mart FLW Tour Championship to battle for a chance at the $260,000 first prize. Swindle's enthusiasm is visible in the photo. Photo by Patrick Baker. Angler: Gerald Swindle.
September 13, 2002 • Patrick Baker • Archives

SHREVEPORT, La. – Friday the 13th crept up on Cross Lake and hexed half of the 24 pro anglers who survived days one and two of the Wal-Mart FLW Tour Championship to fish in the semifinal round. Though all of the semifinalists fished admirably throughout the week to make it as far as they had, day three was truly an unlucky one for the dozen fishermen who were bumped out of the bracket-style tournament.

For the remaining 12 pros, Friday the 13th may signify a day of good fortune from here on out. This day proved to be the gateway to the ultimate bracket match and a shot at $260,000 for John Sappington of Wyandotte, Okla., and Gerald Swindle of Hayden, Ala.

Each pro fishing in Saturday’s final had to beat the men in his respective bracket pairings to have a shot at the final showdown. However, cumulative weight for these qualifiers dictated which bracket they will be fishing in tomorrow. So Sappington and Swindle had the greatest weights of the qualifiers, while the men seeded Nos. 11 and 12 on the other end of the bracket spectrum tallied the lowest three-day weights of all those who advanced to the end of the trail.

The new championship format has elicited a wide array of reactions from fans and fishermen alike. Some are scratching their heads trying to figure out how Greg Hackney of Oak Ridge, La., could be eliminated today with a cumulative weight of more than three times that of one of the finalists. Some think the bracket pairings added a new air of excitement to the championship format.

What nobody can deny, however, is that matching anglers head-to-head can create matchups that can be equally as odd as awe-inspiring.

Clash of the titans

The latter type of bracket was best exemplified by the pairing of Rick Clunn and Larry Nixon, competitors known as two of the world’s greatest anglers.

Clunn said, “Larry and I have had some great battles over the years.”

But Clunn, who hails from Ava, Mo., bested Nixon, who lives in Bee Branch, Ark. Clunn’s prize catch of two fish (one of which had started to swallow the other in his livewell) weighed a whopping 4 pounds, 4 ounces compared to Nixon’s two-bass total of 2-9.

More prevalent, however, were the strange pairings and tournament coincidences that were in time with the superstition that can accompany a Friday falling on the 13th of the month.

Fellow North Carolinian anglers Alvin Shaw and Tracy Adams dueled it out today. Shaw, who lives in State Road, ended up out-fishing Adams, who lives about 30 miles away in Wilkesboro. Shaw said they travel together, room together and even occupy their road time by talking to one another on CBs. He said they had a good laugh when they first realized they could end up facing each other in the semifinals.

“When we saw the brackets, we thought there was no way we’d face each other – but we did,” Shaw said, adding that the matchup did not create a rivalry. “We decided, `We’ve just got to go out there and fish. It’s just another fishing tournament.”

The fact that Shaw’s small 14-ounce fish was all it took to bump Adams on a tough day that saw him zeroing didn’t threaten the friendship.

Adams agreed and said, “We had a lot of fun.”

Two other friends who share the home state, Michigan – as well as remarkably similar names – faced off in Friday’s semifinals. Kevin VanDam, of Kalamazoo, and Kevin Vida, of Clare, have gotten to know each other through fishing tournaments in Michigan and along the tournament trail.

VanDam, last year’s Land O’Lakes Angler of the Year, fell to Vida today, but had no complaints about the matchup, saying, “It’s not going to change our friendship.”

Vida may not have been fishing against VanDam, but he admitted some of his other friends were hoping he might come out on top.

“All my buddies at home were joking around and kind of rooting for the underdog,” he said.

However, Vida was not confident when contemplating the possibility of fishing against the second-highest points winner on the 2002 FLW Tour.

“When I saw the original bracket, I thought, `Oh no, I might have to fish against the best fisherman in America,'” he said. “I thought it would be kind of funny in a way if it did happen.”

Two other anglers with almost identical names entered the semifinals with impressive overall catch weights, though they did not end up paired in the same bracket. Brent Chapman of Shawnee, Kans., will fish seeded No. 3 in the finals while Bill Chapman of Salt Lake, W.V., and of no family relation, missed the mark today.

Brent Chapman acknowledged the coincidence and said, “Maybe the Chapmans are supposed to do well, I guess.”

Bill Chapman said with a laugh, “You just can’t get too many of us (Chapmans).”

Clunn weighed in on the side of the bracket-style championship, though he said it could stand some improvement.

“I really think it’s got potential,” he said. “It needs to be tweaked a little bit.”

Many of the FLW pros have had positive things to say about the head-to-head format, Clunn said, but many wish all of the finalists would have a chance at winning first place. That would essentially require a longer tournament in which the field of brackets is slowly whittled down to the final two anglers, or fewer fishermen starting the tourney.

“I think that everybody I’ve talked to … that’s been the consensus,” Clunn said. “I like (the brackets). I really give them credit for coming up with something that has interest.”

At the same time, Clunn said there is definite merit in accumulated weight over several days being a larger factor in determining a factor. Like a PGA golf tournament or baseball’s World Series, such a tournament is more likely to forgive an angler who has one bad day and truly show who has best fished a multiday tournament, Clunn said.

The 24 pros who fished Friday caught a total of 57 bass weighing 98 pounds, 2 ounces. All of them were released alive (including the one that was on its way to being a snack for its larger livewell partner in Clunn’s boat).

Keith Pace of Monticello, Ark., was crowned champion of the Co-angler Division, where 24 fishermen caught 27 keeper bass on Friday, all of which were released alive. Only one co-angler, Pace, caught a five-fish limit. The total weight of the 27 fish registered 36 pounds, 3 ounces.