It’s Sappington, Swindle for all the marbles 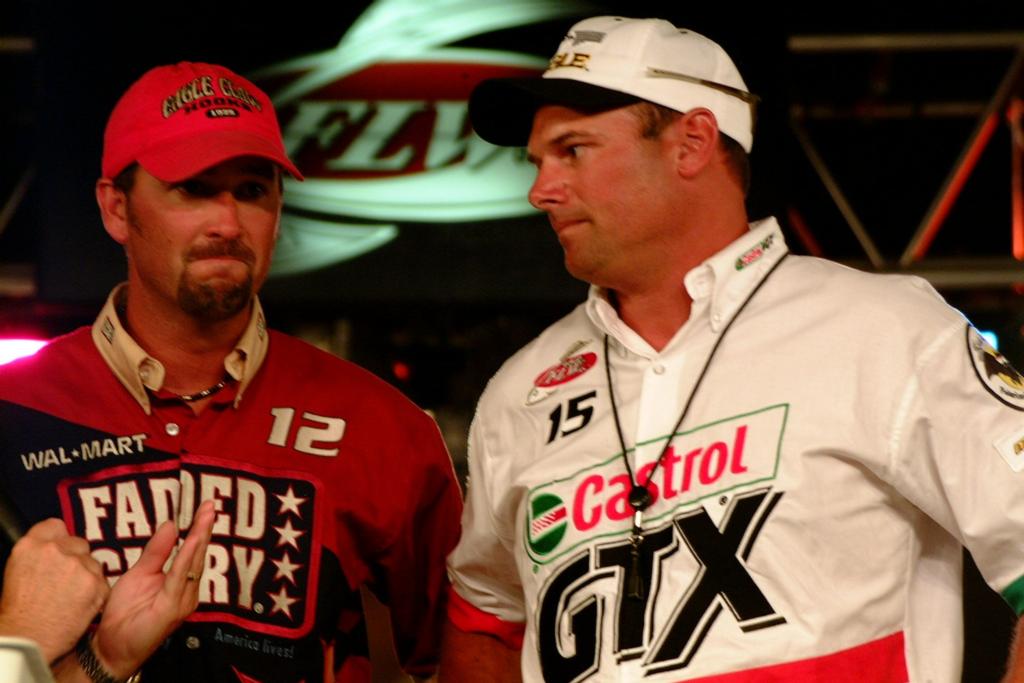 SHREVEPORT, La. – In one of the more exciting weigh-ins in recent memory, Gerald Swindle and John Sappington came from behind to pull off a berth in the 2002 FLW Championship title match. However, it didn’t come easy.

With all eyes on Greg Hackney, who led the tournament throughout the first two days of competition, bass fishing enthusiasts and anglers alike watched anxiously as the native of Oak Ridge, La., walked to the scales. However, when Hackney was only able to weigh in a 1-pound, 3-ounce catch, Brent Chapman, his opponent, took the opening and ran with it.

Chapman, who had the third-highest weight coming into the semifinals, produced a 5-pound, 15-ounce stringer. By defeating Hackney in the head-to-head matchup, Chapman appeared to be almost assured of qualifying for the title match with a combined three-day total of 23 pounds, 4 ounces.

Hackney’s defeat also seemed to clear the way for Pat Fisher, who entered the semifinals with the second-most weight in the tournament. However, while Fisher was able to knock off his opponent, Alton Jones, his catch of 4 pounds, 1 ounce only increased his overall weight to 22 pounds, 11 ounces. With two of the top four anglers already eliminated (Hackney and Jones) and Fisher and Chapman turning in relatively small weights, it was clear that the rest of the field still had a chance to sneak into the title match.

Per tournament rules, the 12 anglers who defeated their opponents in today’s head-to-head matchups would be reseeded according to their combined weight totals over the first three days of competition. However, only the top two seeds after today’s weigh-in would fish for the championship. So, after Chapman and Fisher had weighed in, the remaining anglers knew they would need at least a combined weight of 22 pounds, 11 ounces to have a shot at the title and the $260,000 first-place prize.

However, when Mike Wurm, Rick Clunn, Tracy Adams, Dion Hibdon, Aaron Martens and Takahiro Omori all failed to bring in a good enough catch to leapfrog Fisher or Chapman, only three anglers remained with a realistic chance of breaking into the title match: Gerald Swindle, Kevin VanDam and John Sappington.

First up was Swindle. Although he came into the semifinals with a marginal total weight of 13 pounds, 7 ounces, Swindle didn’t disappoint on the most important day of the tournament, producing a hefty 10-pound, 1-ounce stringer. His combined weight of 23 pounds, 8 ounces was enough to temporarily grab the No.1-qualifying position and knock Fisher out of the title match.

Then it was VanDam’s turn. However, VanDam was only able to produce a 1-pound, 4-ounce catch that wasn’t even good enough to defeat his opponent on this day, Kevin Vida. That left Sappington as the only angler with a realistic chance of upsetting Chapman, who clung tentatively to the second qualifying position with a combined weight of 23 pounds, 4 ounces.

As Sappington approached the scales, Chapman watched anxiously with the full knowledge that any stringer less than 9 pounds, 8 ounces would not be enough to evict him from the title match. However, Sappington did not comply. In dramatic fashion, Sappington produced one lunker after another, eventually turning in the best stringer of the entire afternoon, an 11-pound, 14-ounce catch.

To his delight, Sappington now had a total weight of 25 pounds, 6 ounces as well as a berth in the all-important title match with Swindle.

“It’s exhilarating. I love it,” said Sappington. “I really didn’t think I caught enough to make it. But the Lord really blessed me today. This is my highest-ever finish on the FLW Tour, so it feels great.”

Sappington, a resident of Wyandotte, Okla., said that he knew coming into the semifinals that he was going to have to fish as well as he’s ever fished before in his life.

“Today was really the most important day of the tournament,” he said. “I knew I was going to have to come out today and catch as many fish as I could. Yesterday, I finally figured out how to get the bigger bites and it really paid off. Today, I just focused on getting those big bites.”

Although Sappington knows that he has a tough final-day opponent in Swindle – ironically, one of his best friends on the tour – he said he likes his chances in tomorrow’s head-to-head matchup.

“I really have confidence in the area that I’m in,” he said. “But I’m definitely have to go all out tomorrow. Because nobody remembers who finishes in second place.”

If Sappington was pleased with his finish, Swindle was downright giddy with the prospect of fishing for the FLW Championship and a chance at $260,000 in prize money.

“It’s kind of overwhelming, but I’m so pumped up right now I can hardly believe it,” he said. “I’ve been able to turn my fishing up a notch each day, and, today, I turned it up to full blast. I am pumped!”

Swindle, who has been targeting largemouth bass near boat docks in less than 5 feet of water for most of the tournament, said his practice sessions on Cross Lake were indispensable.

“I fished a lot of different stuff in practice and I was eventually able to rule everything out but two different things,” he said. “That gave me a lot of confidence coming in. Because of my practice, I knew I was going to be able to generate a lot of bites, but I also knew there would be a lot of luck involved with the slot limit. Because there is no way you can pattern a 17-inch fish.”

Swindle was referring to the difficult slot limit in which anglers were not permitted to keep any fish between 14 and 17 inches or any fish under 12 inches.

Swindle said that neither the hefty prize money nor his friendship with Sappington would enter into his mind for the next 24 hours.

“You only get a few opportunities to win a tournament like this in your lifetime, so I’m not going to get caught up thinking about the money,” he said. “And I know John and I are friends, but I’m going to have to temporarily put aside our friendship during the finals. When I hit that water tomorrow, I’m going to let it all hang out.”

And what if he were to win the championship?

“I’ll tell you what, you better have your cameras ready,” he said. “Who knows what I might do. I might just do what those soccer guys do and rip off my shirt and run around on the stage. You better be ready.”

Although the Swindle-Sappington duel will be the premier matchup during tomorrow’s competition, there will be a number of other compelling head-to-head contests.

Brent Chapman of Shawnee, Kansas and Pat Fisher of Stone Mountain, Ga., will square off for third and fourth place; Aaron Martens of Castaic, Calif., and Dion Hibdon of Stover, Mo., will compete for fifth and sixth place; Bernie Schultz of Gainesville, Fla., and Rick Clunn of Ava., Mo., will vye for seventh and eighth place; Takahiro Omori of Emory, Texas, and Kevin Vida of Clare, Mich., will battle for ninth and 10th place; and Wes Thomas of Hanover, Ind., and Alvin Shaw of State Road, N.C., will battle for 11th and 12th place.

Tomorrow’s final takeoff is scheduled to take place at 6:30 a.m. at the American Legion, located at 5315 Southlake Shore Drive in Shreveport.