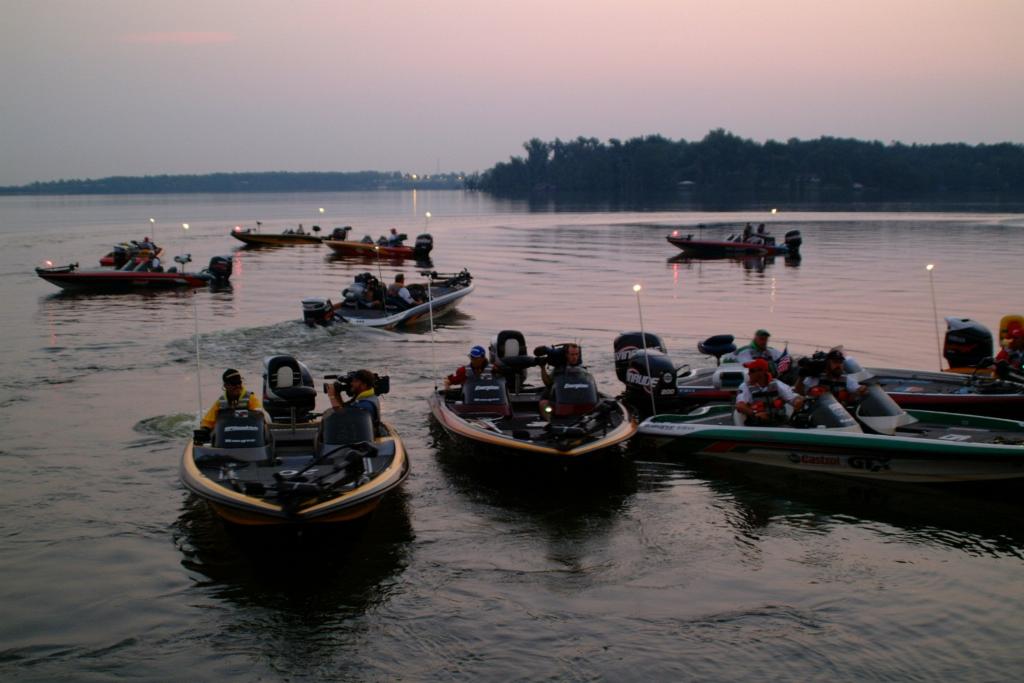 The top dozen anglers on the FLW Tour position their boats for a final day of fishing on Cross Lake during the 2002 championship. Photo by Patrick Baker.
September 14, 2002 • Patrick Baker • Archives

SHREVEPORT, La. – The southern sounds of “Sweet Home Alabama” blared from lakeside speakers Saturday morning as anglers prepared for a final day of championship fishing on Cross Lake. However, John Sappington and Gerald Swindle were likely each hoping it would be his “Louisiana Saturday Night.”

Sappington of Wyandotte, Okla., and Swindle of Hayden, Ala., both fought their way through the bracket system this week, successfully squaring off against two other anglers before reaching the final showdown. Each man also accumulated enough total weight during the first three days of competition to enter the top-seeded bracket and a shot at $260,000.

A field of 48 anglers started the 2002 Wal-Mart FLW Tour Championship on Wednesday. Through a head-to-head bracket system, the field was pared down to 24 by Friday and only a dozen anglers have qualified to fish in today’s finals.

– Each of the pros who competed in this championship had to have a superior season just to qualify. Now, the last 12 standing scrap for the following place rankings:

– Takahiro Omori of Emory, Texas, and Kevin Vida of Clare, Mich., are fishing for ninth.

– Aaron Martens of Castaic, Calif., is fishing against Dion Hibdon of Stover, Mo., for fifth.

– Sappington and Swindle are dueling for the championship.

Sizing up the fishery and the competition 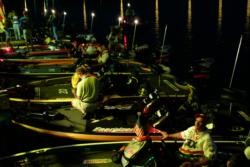 The slot limit on Cross Lake has made strategy a key component of fishing this championship. No fish between 14 and 17 inches long may be kept. Up to five bass smaller than 14 inches long may be kept and four fish longer than 17 inches may be kept. Few anglers have complained about the Cross Lake fishery, citing bountiful catches as evidence. However, the slot limit has sent many of those bass back to the water accounting for a fairly low tournament catch overall.

The head-to-head style of the championship matched with a cumulative-weight factor that determined final seeding have contributed to the way anglers have been sizing up the fishing situation and their competition. Many anglers have been heard to say this week that, at the end of the day, they were actually competing against the fish.

This morning before the final takeoff, Swindle said he would approach day four from the perspective of an angler trying to outsmart a lake’s fish population. Sappington, on the other hand, said his strategy shifted throughout the week but today he had one plan of attack: to out-fish Swindle.

After today’s weigh-in, one of these premier anglers will be on his way home – even if it’s not in Alabama – with a second-place check, and the other will be dancing in the kitchen `til the morning light $260,000 richer.

The final weigh-in of the championship begins today at 2 p.m. outside the Wal-Mart Supercenter on Pines Road in Shreveport.