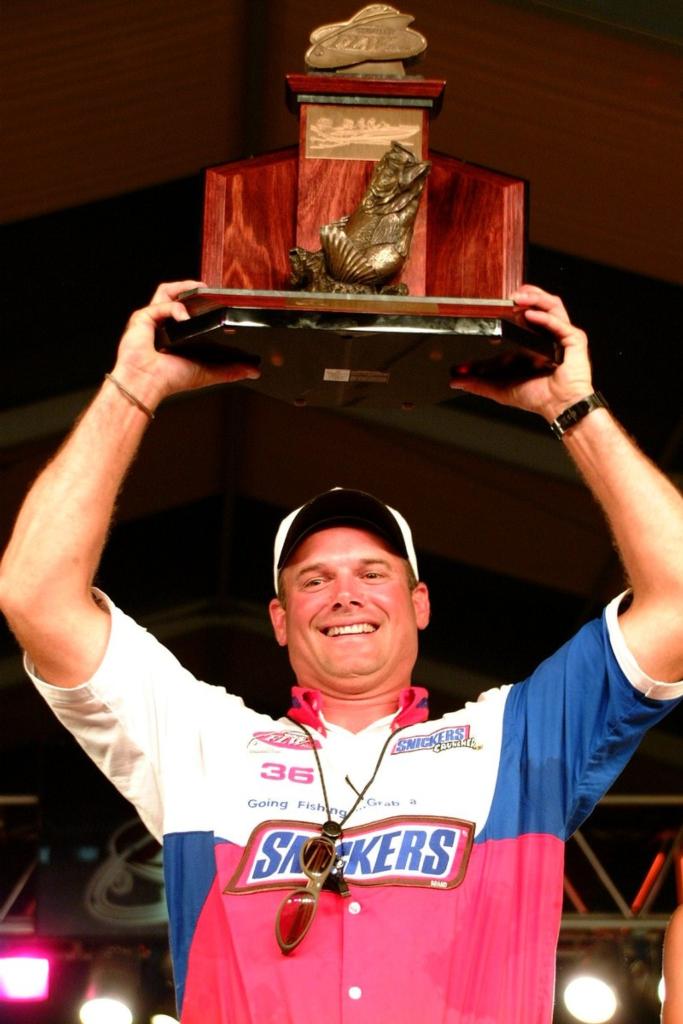 SHREVEPORT, La. – The heat was on John Sappington, literally and figuratively. After fishing in searing, 90-degree temperatures all day, Sappington was forced to sweat it out under the hot Louisiana sun and then wait until 3 p.m. to find out if he had defeated his rival and long-time friend, Gerald Swindle.

For the native of Wyandotte, Okla., the wait appeared to be endless from the start.

Sappington, who landed four quality fish by 8 a.m., failed to register a bite the entire rest of the day. What made it worse was that, once he finally reached the weigh-in tent, he was informed that Swindle had caught a limit – meaning that Sappington was already at a one-fish disadvantage.

“I was scared to death,” he said. “When I heard to (Swindle) had a limit, I knew it was going to be close. It was just a nerve-wracking day.”

The weigh-in tent – packed with a capacity crowd – provided little respite from the sweltering heat as the internal temperatures proved to be as hot or hotter than the outside conditions. To make matters more unnerving was the fact that once the weigh-in began, both Sappington and Swindle had to wait until the other 10 finalists had weighed in before they could even start their dramatic duel. 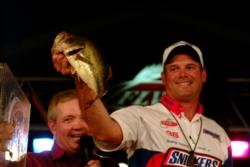 The battle for the 2002 FLW Championship lived up to its billing from the start. After both anglers had weighed in two fish, they were tied. Sappington gained a small advantage after the third fish. And by the time both anglers had weighed in their fourth fish, Sappington had increased his overall lead by 3 pounds, 4 ounces. However, the Oklahoma native was now done.

Swindle then walked to the weigh-in podium to record the weight of his fifth and final fish. With little hesitation, Swindle pulled a good-sized largemouth bass from his bag and held it high in the air. He smiled triumphantly. From the audiences’ perspective, it appeared that it might be enough to capture the championship.

Suddenly the verdict was announced. The fish weighed … 2 pounds, 15 ounces. Sappington had won the championship by a mere 5 ounces. Swindle’s head dropped in disappointment. 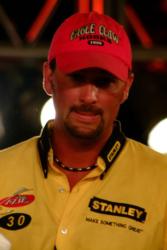 “I felt like I fished well enough to win the tournament,” said Swindle, obviously dejected by the result. “Anytime you can catch a limit on this lake, you expect to do well. If I’d lost some fish or didn’t execute properly, I’d understand it. But I did my best today. I couldn’t have done anything else.”

However, Swindle was also gracious in defeat.

“I’m really proud of John,” he said. “He’s a great fisherman and it was a great finish. But I’ll tell you what, I’ll be back next year. I’m going to go home and train really hard. You’ll see, I’m going to come back and win one of these things yet.”

Swindle, who ultimately produced a final-day catch of 9 pounds, 7 ounces, targeted largemouth bass near boat docks in 1 to 3 feet of water. Swindle flipped a Zoom centipede and Senko as well as a 3/8-ounce War Eagle spinner bait to land the majority of his catch.

Although Swindle came up just a few ounces short, he did leave with a nice consolation prize of $55,000.

The champion of disbelief

For Sappington, the day’s events couldn’t have been more shocking.

“I really didn’t think I had enough to win today,” he said. “I knew Gerald had five fish, so I was sweating bullets the whole time. I was almost physically sick with nerves before the weigh-in.” 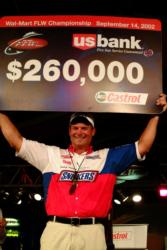 (Photo by Gary Mortenson)” BORDER=”1″ ALIGN=”right”>However, once he was handed the first-place check of $260,000, Sappington made another effort to answer the question of what it feels like to be a champion.

“I guess it really hasn’t sunk in yet that I won,” said Sappington, whose best finish on the FLW Tour prior to this tournament was fifth-place. “I’ve been trying to win an FLW Tour event for a long time and I guess if I was going to win one, this was the one to win. It’s like a dream come true.”

Although it might have felt like a dream, Sappington earned every ounce of his victory. For starters, Sappington had to defeat legendary angler David Fritts in the opening round. With that accomplished, Sappington was forced to go head-to-head with Jay Yelas, this year’s FLW Angler of the Year. After pulling off that upset, Sappington was pitted against Swindle, one of the best anglers in the nation in his own right.

Sappington used a flipping technique near cypress trees and then later to moved to deeper water with a shallow-running crankbait to land the majority of his catch over the course of the tournament.

However, to pull off the victory, Sappington made some crucial adjustments to his bait and tackle the night before the finals.

“I stayed up to midnight last night tearing apart all of my crankbaits, painting them and putting them back together,” he said. “I figured out that the fish weren’t biting on the chartreuse colors as well, so I went back and repainted them all to a shad color. That color made all of the difference in the world.”

It also proved to be the difference between runner-up and champion. 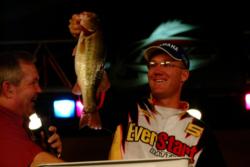 “I was really happy with my performance all week,” said Chapman, who won $34,500 for his efforts. “I thought that if I could catch at least one fish over the slot limit, I’d have a good shot at third place. It worked out well. I only missed one fish the entire tournament. I just had a great week.”

Although Fisher walked away with fourth place and a check for $29,000, it was clear that his mind was still on Friday, where he missed qualifying for the championship match by a mere 13 ounces.

“It was like someone hit me in the stomach,” said Fisher, who only managed a catch of 4 pounds, 1 ounce on Friday. “I didn’t lose any fish the first two days of the tournament and then I lost two fish yesterday that would have been the difference. This morning I just decided to go fishing. Overall though, it was a good week.”

With only two years experience on the FLW Tour, it’s clear that Fisher will have many more days in the spotlight before his career is done. 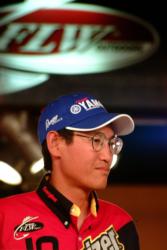 FLW Tour action continues with the start of the 2003 regular season, scheduled to take place Jan. 22-25 at Lake Okeechobee in Clewiston, Fla.