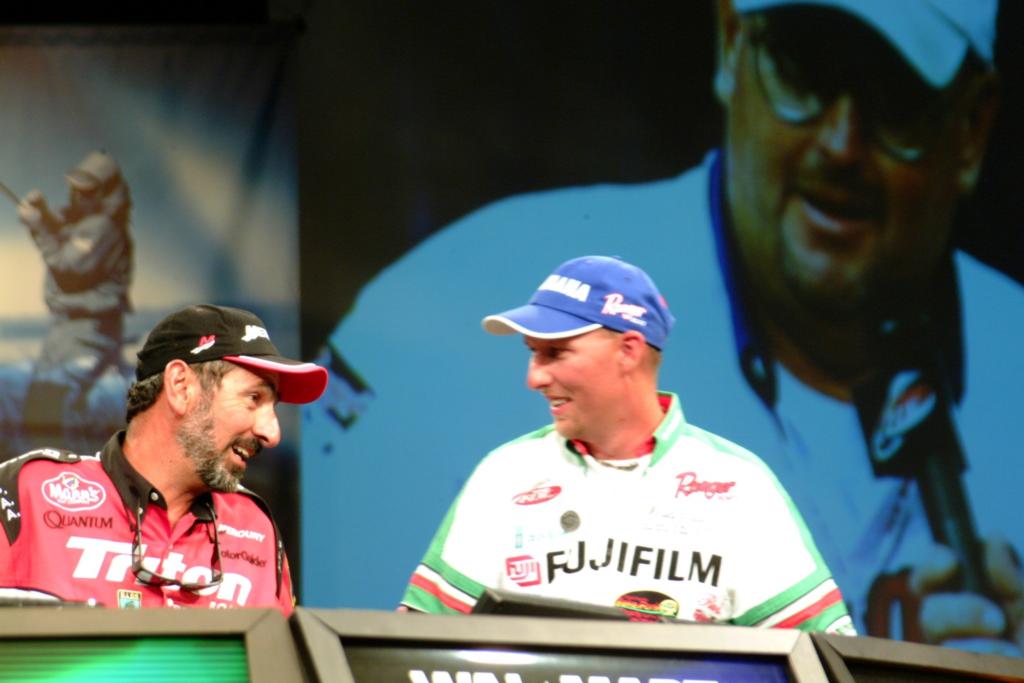 Paul Elias (left) overcame a huge deficit to advance to the semifinals. However, he will have to square off against Wesley Strader, who turned in the biggest two-day stringer of the tournament, in tomorrow's competition. Photo by Gary Mortenson. Anglers: Paul Elias, Wesley Strader.
September 11, 2003 • Gary Mortenson • Tackle Warehouse Pro Circuit

RICHMOND, Va. – With their backs against the wall, Kevin VanDam of Kalamazoo, Mich., and Paul Elias of Pachuta, Miss., showed Thursday why they are considered two of the best anglers in the world. After turning in a dismal 1-pound, 1-ounce performance in Wednesday’s competition, VanDam reached down deep and recorded a thoroughly impressive 12-pound, 13-ounce sack in today’s competition to sweep into the semifinals. Elias, who entered today’s competition with a meager 12 ounces to his credit, followed VanDam’s lead, turning in a 12-pound, 1-ounce bag today to advance against the odds. To be sure, when all was said and done, it was one wild day of championship action.

“I hate to lose, no doubt,” said VanDam, partially explaining the impetus behind his impressive comeback. “I had a bad day yesterday so I was highly motivated today.”

Elias argued that the reason behind his comeback was simple: He stuck to his game plan and didn’t panic.

“I was pretty worried yesterday,” said Elias, who only had one 12-ounce fish to his credit before the start of today’s competition. “But I didn’t do anything different today. The fish just bit better. I’m not really sure why, but I just kept doing what I’ve been doing all along.”

Disappointment abounds for some big names as well

Although many veterans staged impressive comebacks, a few noteworthy FLW Tour pros and legends of the sport didn’t fare nearly as well. Perhaps the most surprising outcome in today’s competition was the fact that Rick Clunn – one of the heavy pre-tournament favorites – would be going home early. Clunn, who could only manage a two-day catch of 5 pounds despite an impressive history on the James River, lost out to hometown favorite John Crews of Jetersville, Va.

“I fished well, but I just didn’t get the bites,” said Clunn, who couldn’t match Crews’ two-day weigh of 9-pounds, 15-ounces. “If you don’t catch fish, it doesn’t really matter who you’re paired against.”

2003 FLW Angler of the Year Dan Morehead met a similar fate. Despite having one of the best seasons in the history of the FLW Tour, Morehead never did quite get on track all week, turning in a two-day total weighing only 3 pounds, 8 ounces.

“I’ve had a tough week,” said Morehead. “But Alvin Shaw (Morehead’s opponent) had a good tournament and I’m happy for him. Overall though, I had a great time here and I’m looking forward to next year.”

Another pre-tournament favorite, Dion Hibdon crashed out of the tournament as well, mustering only 6 pounds and 6 ounces over two days of fishing.

“I’m not going to lie, I didn’t have any fun today,” said Hibdon, who was clearly disappointed by the outcome of today’s events. “I normally fish the tides pretty good, but I struggled out there. It was just one of those weeks for me.”

The beneficiary of Hibdon’s woes was none other than John Sappington of Wyandotte, Okla., last year’s FLW champion.

“This is the first time I’ve ever fished on the James River so I figured I had nothing to lose,” he said. “But the fish have definitely been tough to catch here. I sure hope the water (level) gets a little lower for the rest of the tournament.” 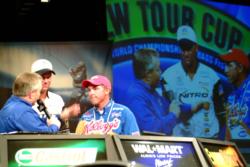 With VanDam mounting the comeback of the day and Clark Wendlandt of Cedar Park, Texas, out-dueling former FLW Angler of the Year David Walker, bass-fishing fans got the marquee matchup for which many had been waiting all summer. As a result, two of the biggest names in tournament bass fishing will go head-to-head in tomorrow’s semifinals with only one advancing to Saturday’s finals.

Wendlandt, who struggled a bit on the water today despite his earlier success, said he can’t start worrying about fishing against VanDam now.

“I’ve got to go catch them one way or another. I can’t really concern myself with what Kevin does,” he said. “The fish are there for me. It’s just a question of whether I can put it all together tomorrow.”

“When you’re fishing against Randy, you really can’t hold back,” said Strader. “Basically, I tried to catch as many fish as I could today. But the key for me was to slow everything down. You really had to fish slow.”

Unfortunately for Strader, his reward for advancing is a date with Elias in the semifinals.

“I keep getting to fish against these legends; what’s up with that?” Strader joked. “As for my strategy tomorrow, it’s simple: try to beat Paul.”

Many of the head-to-head contests came down to the wire in today’s weigh-in. However, none was as close as the battle between Tommy Biffle of Wagoner, Okla., and Anthony Gagliardi of Prosperity, S.C. After both men approached the scales, it was Biffle who would ultimately prove victorious by a grand total of 1 ounce. But while Biffle was happy to advance after landing a two-day stringer weighing only 6 pounds, he definitely had some worries heading into tomorrow.

“I’ve got to do something different tomorrow because what I’ve been doing hasn’t been working,” said Biffle. 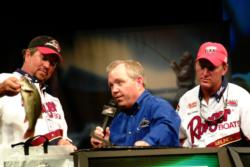 There were many other close contests: Jimmy Millsaps (8 pounds, 8 ounces) of Canton, Ga., defeated Mike Surman of Boca Raton, Fla., by 4 ounces; Todd Auten (9 pounds, 15 ounces) defeated Japanese native Toshinari Namiki by 1 pound, 2 ounces; and Shad Schenck of Waynetown, Ind., (16 pounds) defeated Matt Herren of Trussville, Ala., by 1 pound, 2 ounces. However, upon further review, Schenck just might have been the luckiest angler of the field. After experiencing mechanical problems in the morning, Schenck really wasn’t able to get back out onto the water until noon. To make matters worse, because he had to come back in for repairs, he was forced to throw a 2-pound bass back in the James River in order to comply with stringent tournament rules.

“I really didn’t think I was going to make it,” said Schenck. “It really was a stressful day at the office.”

Many anglers who fished well also found heartache by today’s end. In addition to Herren – who was sent packing despite landing a two-day total of 14 pounds, 14 ounces – Bill Chapman of Salt Rock, W. Va., failed to move on even though he netted an impressive two-day total of 14 pounds, 7 ounces. Chapman eventually lost out to Greg Hackney of Gonzales, La., who turned in a fantastic two-day catch of 18 pounds, 7 ounces.

Aaron Martens also fell victim to a tough tournament draw. Although he recovered in dramatic fashion after netting a paltry catch of 2 pounds, 9 ounces in yesterday’s competition, his two-day total of 11 pounds, 5 ounces wasn’t enough to defeat Harmon Davis of Marlow, Okla., who ultimately won out with a two-day stringer weighing 16 pounds, 3 ounces.

2003 FLW Championship action continues tomorrow morning with the top 24 anglers squaring off for another round of head-to-head bracket matchups. Takeoff is scheduled to take place at 7 a.m. at the Osborne Boat Landing, located at 9680 Osborne Turn Pike in Richmond, Va. Anglers qualifying for the semifinals will have all of their weights reset to zero for the start of tomorrow’s competition.