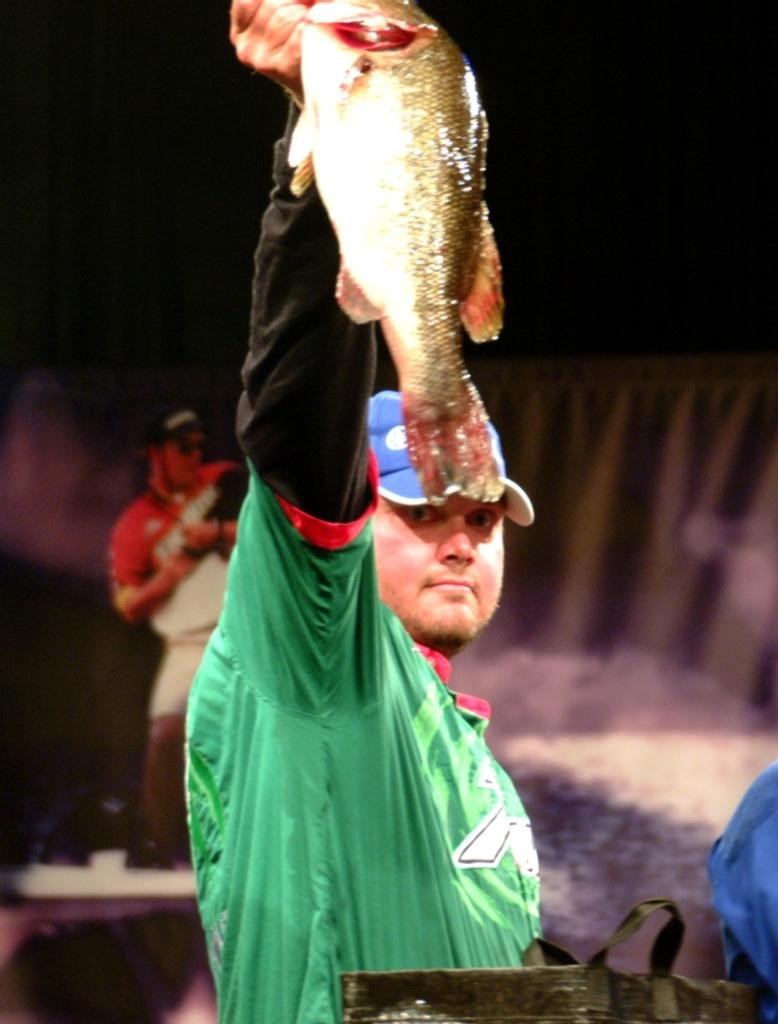 Friday, Greg Hackney of Gonzales, La., advanced to his first FLW finals by notching the heaviest stringer of the week – 14 pounds – and beat Tommy Biffle by just over a pound. He landed this kicker largemouth that weighed around 6 pounds. Photo by Jeff Schroeder. Angler: Greg Hackney.
September 12, 2003 • Jeff Schroeder • Tackle Warehouse Pro Circuit

What goes around, comes around … In last year’s FLW Championship, Greg Hackney got knocked out of competition in the semifinal round by Bill Chapman. Thursday, Hackney repaid the favor by knocking Chapman out of the opening round after both of them caught nice limits. Friday, Hackney advanced to his first FLW finals by notching the heaviest stringer of the week – 14 pounds – and beat Tommy Biffle by just over a pound. Hackney, who is mainly flipping a jig into vegetation on the Chickahominy River, said that the number of bites he’s had has diminished throughout the week, but they’re getting bigger. He landed a kicker largemouth that weighed around 6 pounds Friday. Will he have enough big bass and poise to sustain one final push for $500,000 Saturday? Depends on the weather, he says, which today was rainy and windy. “The only thing that worries me is that I almost didn’t make it back in because it was really rough,” he said. “I left myself two hours to come back.” 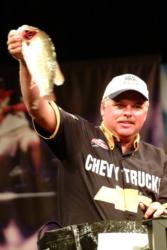 Not a bracket fan … Hackney needed to catch the biggest stringer Friday because his opponent, Biffle, caught the second-biggest. Biffle’s limit weighed 12 pounds, 13 ounces, but he fell victim to the bracket format. It’s hard not to feel sorry for Biffle. He has finished in second place at the FLW Championship three times and was knocked out of last year’s championship after catching a leading weight in the opening round. “It feels bad,” he said about today’s outcome. “I thought I had enough, but he had that one big bite. That’s part of it, I guess.” Understandably, he’s having a tough time embracing the new bracket format. “I’d rather it be total weight,” he said diplomatically. “The guy that catches the most total weight should win.” But, if that were the case, he wouldn’t have even qualified for the semifinals. He only caught 6 pounds in the opening round this week and was the lowest qualifying weight of the day yesterday. Thirty-six pros caught more than he did in the opening round, and he recognized that. “I felt like I shouldn’t have been there,” he said, “but last year it was the same deal and I ended up going home early.”

Winging it … Pre-tournament favorite David Dudley, who grew up in Virginia, caught the second-heaviest qualifying weight of the semifinals, but not because he’s implementing any sort of local knowledge to his advantage. Before the tournament, Dudley toyed with the idea of making a long run down the intracoastal waterway back to his home waters around Manteo, N.C., where, he says, “I know there’s $500,000 worth of fish in there.” But he decided the run was too far and illegal, to boot, since he’d have to go through a lock to get there. Locks are off limits this week. But he has hung on like a proverbial hair on a biscuit so far, as Dudley tends to do in these big-money events. “I really didn’t have a good practice,” said Dudley, who has been spotted running around the Appomattox River over the last three days. “I’ve been putting things together as the tournament goes on and learning more every day.” 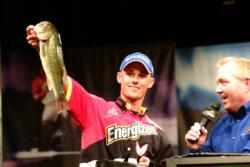 Speaking of favorites … John Crews is putting on a show for the hometown crowd. The only Virginia local to make it this far, he notched the fourth-best qualifying weight – 9 pounds, 8 ounces – to advance to his first FLW Championship finals, defeating the likes of Rick Clunn and Mike Hawkes in the process. “Every direction you look, there are champions,” Crews said onstage Friday. “So it’s an honor just to be fishing against them.”

Good point … Kevin VanDam has made yet another FLW final round, a feat he pulls off an astonishing 40 percent of the time on tour. However, the mighty one has never actually won an FLW event – a detail that FLW Outdoors host Charlie Evans teasingly never lets him forget. Evans reminded VanDam again Friday, and the pro didn’t flinch: “I’m going to keep trying, and I’m not going to let you get me down when you keep bringing that up. Besides, the more times that you make that final day, the better your chances.”

2-1: Weight, in pounds and ounces, of the single bass that Paul Elias caught to qualify for the final round of the 2003 FLW Championship and the chance to fish for a half-million dollars. In Friday’s semifinals, he defeated Wesley Strader, who only caught 13 ounces.

1.2 million: Amount, in dollars, of the money that David Dudley will have won in just two FLW Outdoors tournament if he goes on to win Saturday. He cashed a $700,000 check for winning the 2002 Ranger M1.

“It was bad, let me tell you. This arm was hurting really bad, but I think it’s going to make it another day.”
– Final-round qualifier Larry Nixon, who’s fishing with an injured arm. Nixon has been casting with both hands all week in order to protect his bad wrist.

“Oh! Sushi!”
– Co-angler Katsutoshi Furusawa, describing his only bass of the day. It weighed just 11 ounces.