Run and gun or stay and wait 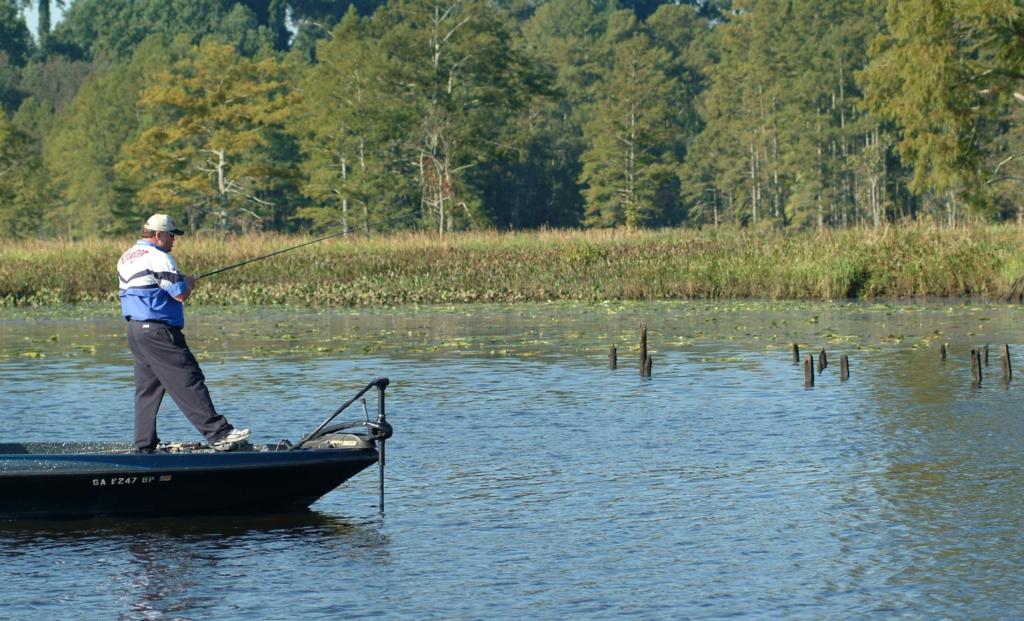 Pro Stanley Mitchell of Fitzgerald, Ga., is playing the stay-and-wait game on the James River this week at the 2003 FLW Tour Championship. He will return to these pilings several times throughout the day as the tide falls in his area. Photo by Rob Newell. Angler: Stanley Mitchell.
September 12, 2003 • Rob Newell • Tackle Warehouse Pro Circuit

RICHMOND, Va. – One golden rule of tidewater bassing is to fish around the low tide. Here on the James River, sight of the 2003 FLW Tour Championship, it’s no secret: The last hour of outgoing tide and first part of the incoming tide are the best times to fish.

Whether or not bass actually feed more on the lower tide is up for debate. But one thing is for sure, when the tide drops 3 feet on the James, the bass have a lot fewer places to go.

Tidewater bass are shallow-water bass. When the tide is high, inundating the woody banks, bass have plenty of shallow real estate from which to choose. But as the water drops with low tide, those bank-front condos become high and dry, and bass are forced to move in with each other into scarce, crowded shacks at the river’s edge.

When bass have fewer pieces of cover to utilize, they become more aggressive and more vulnerable to Mr. Angler. In addition, the lower tide lets the angler see and fish more of the cover that’s normally submerged on high tide. Essentially, the lower the tide, the better the fishing.

As the tide cycles down from high to low, the period of lowest tide moves upriver like the trough of a huge wave. Ideally, those who run the tide try to fish that low tide trough – or “window” – as it moves up the river.

For example, according to a tide chart, the James River tides on Wednesday forecasted low tide at Jamestown Island to be at 7:03 a.m. Eastern time. Farther north at Hopewell, low tide was at 10:30 a.m. And in Richmond it was 11:41 a.m.

What this means for pros is that they can run south first thing in the morning and fish the low-tide window all the way back to Richmond in a run-and-gun fashion. They will fish about 20 minutes of the premium low tide in one place, then crank up and run north to catch back up with premium low tide and fish again.

Running the tide usually means that anglers have about 10 to 20 very small spots that they are fishing from south to north.

Running the tides also requires paying close attention to tide charts because the tides change each day. During the FLW Tour Championship week, the low tide has been getting later each day.

Here’s what low tide for the rest of the week looks like:

The other primary tidewater strategy is simply to go into an area or two, stay put and fish the entire tide cycle in one place. Instead of changing areas, anglers fishing a whole tide cycle in one place must continually change their techniques to suit the water level. They must know how to catch fish on both low and high tides within their areas.

So what’s a better strategy?

This week, FLW Tour Championship pros have employed both strategies on the James River, and, so far, neither plan has been dominant.

What have been dominant, though, are extremely high tides. A low-pressure system off the Atlantic coast started kicking up severe northeast winds on Tuesday evening, forcing water into the whole Chesapeake Bay system. High tide has been 1 to 2 feet higher than normal, and the low tide has been virtually nonexistent.

Many anglers say they never experienced such high tides at any point during practice. Those running the tide on Wednesday really did not have a tide to run at all. At the same time, those fishing one spot all day never got any low tide, either. 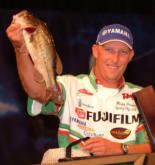 After the pro field was reduced to 24 anglers Thursday afternoon, both tidal strategies were represented in the semifinal cut.

However, the tide runners were looking a little stronger than those that had chosen to entrench.

Here is what at a few pros who survived the first elimination round have to say about their tidal strategies:

“You can throw that tide chart away,” Strader said about the abnormally high tides on Wednesday. “I’ve got two places that I am staying in. I just adjust with different presentations for the different tides.”

“I have fished six events on this river,” he said. “Every one of those has been won by staying in one place and fishing through all of the tides. But the tides at those tournaments were fairly normal. This tropical system has the tides messed up this week. I don’t think this event can be won in one spot because the water is not going up and down, its staying high. My philosophy is, `If the water is not going to move, then I’m going to.'” 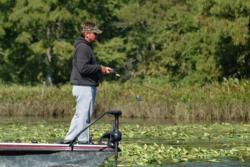 Greg Hackney (18-7) – Greg Hackney of Oak Ridge, La., is staying put and making it work. He had 9 pounds, 14 ounces on Wednesday and another decent limit on Thursday.

“Instead of changing locations with the tide, I’m trying to change techniques with the tide,” he said. “I have a lot of baits on my deck – more than normal for me – and I keep rotating techniques until I find something that works. The fish change drastically from day to day in there. Today I didn’t figure it out until about twelve o’ clock and then I caught my limit.”

Shad Schenck (16-0) – 7 UP pro Shad Schenck of Waynetown, Ind., is running the tides and has made it work both days.

“I am from Indiana; I don’t know much about tides,” he said. “But I don’t think this event can be won fishing one spot. So I got a detailed tide chart and studied it carefully. I decided to run the tides by hitting about 15 places per day. Because of the winds, the tides have been different than I expected, but I have high-tide places – not just low-tide places – figured into my plan as well, and those have paid off in these higher tides.”

Cody Bird (14-14) – Cody Bird of Granbury, Texas, is staying with a hole-sitting game plan in two areas. He has been consistent for two days.

“I think, in order to run tides, you really have to know the water you are fishing,” he said. “I fish saltwater on tides a lot, and I know what a difference it makes when you know the water and how to match a certain tide to a certain place. Like with this wind keeping these tides high: If you are going to run tides you better know how to adapt to these higher tides. I just don’t know the water well enough here to run tides. I’ve got two areas, a high-tide area and a low-tide area. Both are productive, and I am just alternating between them based on what the tide is doing.”

Kevin VanDam (13-14) – Chevy pro Kevin VanDam of Kalamazoo, Mich., was the comeback story of the day on Thursday. After posting a miserly 1-pound, 1-ounce catch on Wednesday, he rebounded with Thursday’s biggest limit of 12 pounds, 13 ounces.

“The combination of high tide and high wind really pummeled my places yesterday,” he said. “I am fishing a lot of exposed water on the main river. The high tide and wind muddied those places up. But with every tide, things change; it’s like pressing the reset button, and they settle back down today. My areas were productive again, today. I am hitting about 40 places in one day. A lot of them are two- to five-cast places, and I’m gone to the next one.”

John Crews (9-15) – Local pro John Crews of Jetersville, Va., has been running the tides. On Wednesday, he stumbled bringing in just one fish weighing 2 pounds, 12 ounces but got back up on his feet Thursday with a limit weighing 8 pounds, 3 ounces to get by Rick Clunn.

“Wednesday the tide was as high as I’ve ever seen it,” he said. “The low tide was as low as the normal high tide. This wind is holding the water up and throwing the tides completely off.”

On Thursday, the wind subsided a bit and let the tide fall out a little more, allowing Crews to run the tides more effectively. 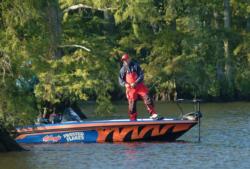 Clark Wendlandt (9-6) – Kellogg’s pro Clark Wendlandt of Cedar Park, Texas, is staying put and working one area. He looked like a magician on Wednesday when he brought 7 pounds, 5 ounces to the scales, but Thursday the wind left his sails when he weighed in just one keeper.

He now faces VanDam in a single-day shootout on Friday.

“I am going to stay in my area,” he said. “I just never got in synch today (Thursday). I zigged when I should have zagged. The area has great potential. I had a couple of good practice days in there. That higher tide is making things difficult. Once the tide comes up, I have a hard time getting a bite.”

Will the stay-and-wait anglers hold the runners and gunners off?