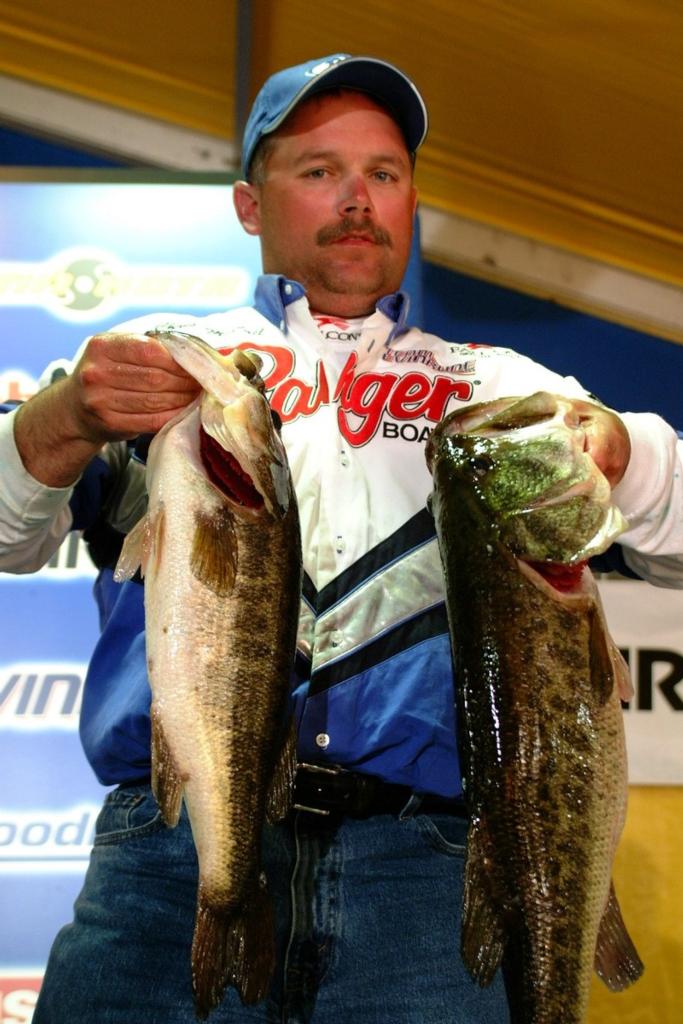 On his third cast of the day, Chris McCall caught an 8-pound, 7-ounce kicker largemouth that ultimately led to a five-bass limit weighing 19-3, pushing his opening-round total to 46-6 and giving him a decisive lead in the Pro Division. Photo by Jeff Schroeder. Angler: Chris McCall.
January 22, 2004 • Jeff Schroeder • Tackle Warehouse Pro Circuit

CLEWISTON, Fla. – If it’s possible to experience a nightmare and a dream at the same time, Chris McCall is doing it right now.

When the 33-year-old pro angler from Jasper, Texas, came in off of Lake Okeechobee Wednesday afternoon, he was ecstatic about catching a massive stringer weighing 27 pounds, 3 ounces to become a leading contender in the Wal-Mart FLW Tour season opener.

All that came to halt immediately after he weighed in, however, when he learned that his mother had passed away while he was out.

Faced with such terrible news, McCall somehow kept it together and went fishing Thursday. It didn’t take long for him to discover that fishing on and staying in the hunt for a $100,000 payday was exactly what he should have done. On his third cast of the day, he caught an 8-pound, 7-ounce kicker largemouth that ultimately led to a five-bass limit weighing 19-3, pushing his opening-round total to 46-6 and giving him a decisive lead in the Pro Division.

“I lost my mom yesterday, so I’ve been distracted,” a somber McCall told the weigh-in crowd Thursday. “But I caught a giant early this morning, and I began to realize that some things happen for a reason. I really believe that’s what happened when I caught that fish.”

What happened when McCall caught that big bass and eventually filled out his limit was history in the making. Like Larry Nixon on day one, who caught the third-heaviest one-day stringer in FLW history, McCall’s opening-round weight of 46-6 became the third-heaviest two-day total in the record books.

“The whole difference was that big fish first thing in the morning. It really helped me not miss a beat,” he said. “She just blew up on the bait, and you just can’t help but get excited about that. It made me feel like I did when I finished at 3 o’clock yesterday.”

McCall caught all of his fish Thursday in clear water on the south end of Okeechobee using a 1/2-ounce, white-and-chartreuse Gambler spinnerbait.

“I started out where I caught my fourth-biggest fish yesterday, and then I just kind of fished around,” he said. “Actually, I hooked one right before weigh-in that was even bigger than the biggest one I got, but it came off.”

The final two days of FLW competition are tough enough for any angler, but for McCall, a second-year FLW pro who has become the obvious sentimental favorite here at Okeechobee, it will undeniably be one of the biggest tests of character he will ever face.

“I need to get a fish in my boat early because, if I don’t, I’ll tend not to focus on what’s going on,” he conceded. “For me, I feel like I’ve already accomplished a lot just getting this far. I’m just going to go out, try to keep my composure and do everything I can to win the tournament.”

Nixon hangs on for second

The two-time FLW winner and Wednesday’s pro leader had a rougher go of it Thursday, catching a limit weighing just 10 pounds, 14 ounces. But thanks to his massive 28-6 weight from day one, Nixon didn’t need much to compile an opening-round total of 39-4, which was more than 7 pounds lighter than the leader but still good enough for second place.

“The fish didn’t bite as good as they did yesterday,” said Nixon, who hails from Bee Branch, Ark. “But that’s how it goes. These big Florida bass don’t always bite every day.”

Nixon, who is still nursing a bad wrist that has kept him out of fishing for months until just prior to this week’s tournament, was still excited about his prospects for the final two days.

“It’s been an absolutely fabulous two days,” he said. “I haven’t fished since September. So when I came to practice last week, I was just trying to see what I could do.”

Billy Bowen Jr., an Ocala, Fla., pro with a solid track record at Okeechobee, made the cut in third place with an opening-round weight of 38 pounds, 10 ounces. Bowen’s was one of the big comeback stories of the opening round, having caught just 15-4 Wednesday and rebounding with the heaviest sack Thursday, 23-6.

“The biggest thing I changed today was I slowed down, way down,” said Bowen, who primarily used his namesake Gambler BB Cricket bait to catch his limit. “I caught five really quick doing that.”

Japanese fishing sensation Shinichi Fukae of Osaka is continuing to make his mark on the American pro circuit. He moved up from fifth place to fourth Thursday with a two-day total of 38 pounds, 2 ounces.

Pro Dave Lefebre of Erie, Pa., moved up from ninth place to fifth with an opening-round weight of 37 pounds, 6 ounces.

Rojas also landed the $750 Snickers Big Bass award, as well as the mark to beat for biggest bass of the year, for a nice largemouth that weighed 10 pounds even.

All of the top 10 pros caught five-bass limits both days of the opening round. A total of 161 pros brought limits to the scale Thursday.

Leading the charge into the Co-angler Division finals Friday is Robert Kimbrough. The Vero Beach, Fla., native caught an enormous sack of fish from the back of the boat Thursday to take the lead with an opening-round total of 28 pounds, 8 ounces.

Kimbrough’s limit Thursday – 21 pounds, 2 ounces – became the biggest one-day co-angler weight of the tournament and put a smile as big as Okeechobee itself across the local angler’s face.

“It’s awesome. I’m tickled pink,” said Kimbrough, who came off the waiting list to fish this week in his first FLW event. “I work at Okeechobee, so this is kind of my home water. … We were fishing just out in flat, open water – dark, muddy water – which I don’t normally fish on this lake.”

The leader used a combination of Zoom Flukes, Senkos and Tiki Sticks to catch his fish over the first two days. His kicker bass – an 8-pound, 6-ounce largemouth – came on a Senko.

Alex Ormand of Bessemer City, N.C., took second place for the co-anglers with an opening-round weight of 25 pounds, 4 ounces.

Ken Murphy of Meridian, Miss., placed third with a weight of 22 pounds, 3 ounces.

Fourth place went to Ken Keirsey of Owasso, Okla., with a weight of 21 pounds, 13 ounces.

While Kimbrough’s 8-6 bass from the back of the boat was impressive, it wasn’t the largest in the Co-angler Division. Paczkowski won the $500 Snickers Big Bass award for a 9-pound, 14-ounce kicker largemouth.

The top 10 anglers in both divisions advanced to Friday’s competition, which begins at the 8 a.m. EST takeoff from Roland Martin’s Marina at 920 E. Del Monte Ave. in Clewiston, Fla. Weights are cleared for Friday’s competition, and co-anglers will fish for one day with the $15,000 winner crowned at weigh-in. The 10 pros continue competition Saturday, with the $100,000 winner determined by the heaviest two-day weight.

Friday and Saturday’s weigh-ins will be held at the Wal-Mart store located at 1005 W. Sugarland Highway in Clewiston beginning at 5 p.m. and 3 p.m., respectively.