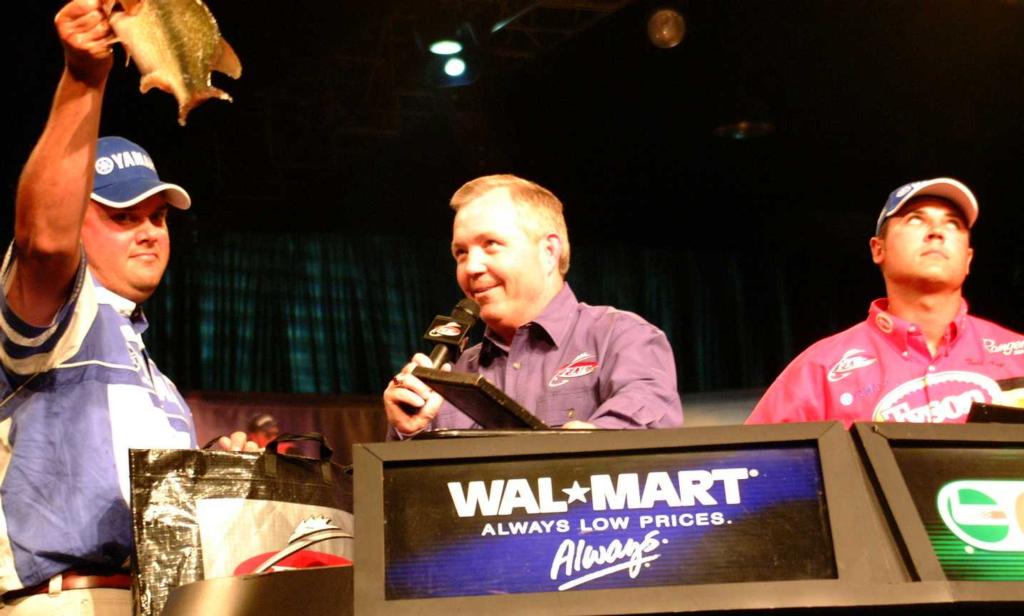 BIRMINGHAM, Ala. – A car crash on Interstate 20 Thursday morning held up traffic and kept a number of Wal-Mart FLW Tour employees and even competitors from reaching takeoff at Logan Martin Lake on time. (Co-angler Simon Morrow was involved but, thankfully, was unhurt.) But at the end of the fishing day, the person who most felt like he was broadsided by a Mack truck was probably Todd Ary, who missed the FLW Championship’s semifinal cut on his home lake by virtue of a tiebreaker.

“I’m about to throw up,” Ary said on first reaction to seeing his weight – and fate – Thursday.

In what quickly became the most compelling bracket corner of the opening round, Greg Hackney vs. Todd Ary and Luke Clausen vs. Shad Schenck made for a captivating first two days at Logan Martin.

First, Clausen and Schenck – fishing against each other – pounded together the two best limits of the entire pro field on day one. Then, in the other half of the bracket, Hackney and Ary battled it out into a tie, of all things, on day two.

There’s a half-million dollars on the line at this thing. Who could blame them if all four of these guys had a Pepto Bismol dinner tonight?

And if they did, it certainly might have tasted better than what Ary and Schenck had to swallow Thursday afternoon.

Letting the Ary out

In a tight battle, both Hackney and Ary caught between 7 and 8 pounds Wednesday. (Hackney had 7 pounds, 5 ounces and Ary had 7-14.) Not great weights for either of them, but enough to advance if Thursday went well.

Thursday did go relatively well for both of them – once again, almost equally well. Both came to the podium together and Hackney proceeded to place a limit of 11 pounds, 10 ounces of bass on the scale. With each good-size fish that Hackney pulled out of his opaque sack, one could see the disbelief cross Ary’s face. Hackey’s opening-round total: 18-15.

Then Ary, one of the local favorites this week, unloaded his sack: five bass weighing 11 pounds, 1 ounce. His total: also 18-15.

The Birmingham crowd let out an audible groan.

“I can’t put it into words. It’s disappointing,” said Ary, who hails from Birmingham. “Yesterday, I sucked. I didn’t fish well. But I fished well today. I just beat myself yesterday. Everybody has to go by the rules and FLW puts on the best tournaments around, so I can’t complain. This is definitely fuel for next year, man. I was just glad to be here this year, but now I think it’s time to break out a can of whoop — for next year.”

The characteristically low-key Hackney, obviously, was less distressed by Thursday’s outcome. No stranger to tight finishes in big events, Hackney finished second at Kentucky Lake earlier this year due to an 8-ounce penalty.

In Friday’s semifinals, Hackney will face Clausen, who has caught the most fish so far this week. The pro from Spokane, Wash., pieced together another limit Thursday – weighing 11 pounds, 15 ounces – and topped all pros in the opening round with a two-day total of 26-3.

Schenck, from Waynestown, Ind., did indeed stumble. After weighing in the second-heaviest limit on day one behind Clausen, he caught four bass weighing just 4 pounds, 4 ounces on day two and ended the opening round with 18-2. What was billed Wednesday night as a heavyweight battle quickly turned into a second-round knockout by Thursday.

“Yeah, I kind of wish this wasn’t a bracket tournament,” Clausen said. “I’d have a pretty good accumulated weight.”

As for his upcoming matchup against Hackney tomorrow, Clausen said he would try to keep pounding.

Two of the biggest names of the 2004 FLW season rebounded big Thursday. Shinichi Fukae of Osaka, Japan, and Scott Martin of Clewiston, Fla., both overcame day-one deficits to make the cut on day two.

This year’s Land O’Lakes Angler of the Year, Fukae, who was more than 2 pounds behind Chad Grigsby coming into Thursday, caught his second limit of the week and upended the Colon, Mich., pro with a opening-round weight of 16 pounds, 4 ounces to Grigsby’s 15-6.

“I had a really rough day,” Grigsby said. “I had a lot of bites on a buzzbait, and I probably should have been done fishing by 8 o’clock, but I just didn’t execute.”

Martin, this year’s Forrest Wood Open champ, overcame more than a pound deficit on Alvin Shaw of State Road, N.C., and handily defeated him by more than 4 1/2 pounds. Martin caught 21 pounds, 12 ounces in the opening round and Shaw caught 17-0.

“If the sun comes out tomorrow, I feel pretty good about it. I’m looking forward to tomorrow,” said Martin, who, it seems, fished out of a jet boat Thursday in order to gain access to some extremely inaccessible backwater up in creeks. That option will no longer be available to Martin or anyone else, however, because in Friday and Saturday’s fishing, competitors will be fishing from Ranger boats provided to them.

Besides Clausen and Martin, six more pros notched more than 20 pounds in the opening round and advanced to the field of 24.

Mickey Bruce of Buford, Ga., had the second-heaviest two-day weight with 25 pounds, 10 ounces and handed a tough defeat to Aaron Martens of Castaic, Calif., who also caught some good fish and totaled 20-11.

Dave Lefebre of Erie, Pa., caught 23 pounds, 3 ounces and beat another local favorite, Greg Pugh of Cullman, Ala., by more than 5 pounds.

“I haven’t caught fish doing what I thought I’d be doing coming into the tournament,” said Lefebre, who pointed to rising water as the main adjustment most pros have had to make this week. “I’m fishing super-shallow. Today, I lost two bites – a 6-pounder and and 3 – and if they turn on to the deal that I’m doing, it’s going to be awesome tomorrow.” 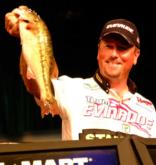 David Walker of Sevierville, Tenn., handily defeated his East Tennessee buddy, Wesley Strader of Spring City, Tenn., by more than 9 pounds with a weight of 22-6 to 13-3.

Kevin Vida of Clare, Mich., won a tough big-weight matchup against Ray Scheide of Russellville, Ark., by a weight of 22 pounds, 13 ounces to 20-6.

Also in the 20-pound range was Mark Rose of Marion, Ark., who upended Emory, Texas’ Takahiro Omori’s bid to become the first angler to claim both the Bassmaster Classic and FLW Championship titles in the same year. Rose caught 20 pounds, 3 ounces and Omori had 15-2.

For the record, the heaviest opening-round catch that didn’t qualify for the semifinals was Martens’ 20 pounds, 11 ounces.

The lightest weight to make the cut was 13 pounds, 3 ounces caught by Matt Herren of Trussville, Ala.

The pro field has been cut in half to 24 anglers and weights have been reset to zero. They will each face off in one-day, head-to-head competition within their brackets to determine the top 12 advancing to Saturday’s final round.