Gulledge has commanding lead in Co-angler Division, but weights zero on Friday 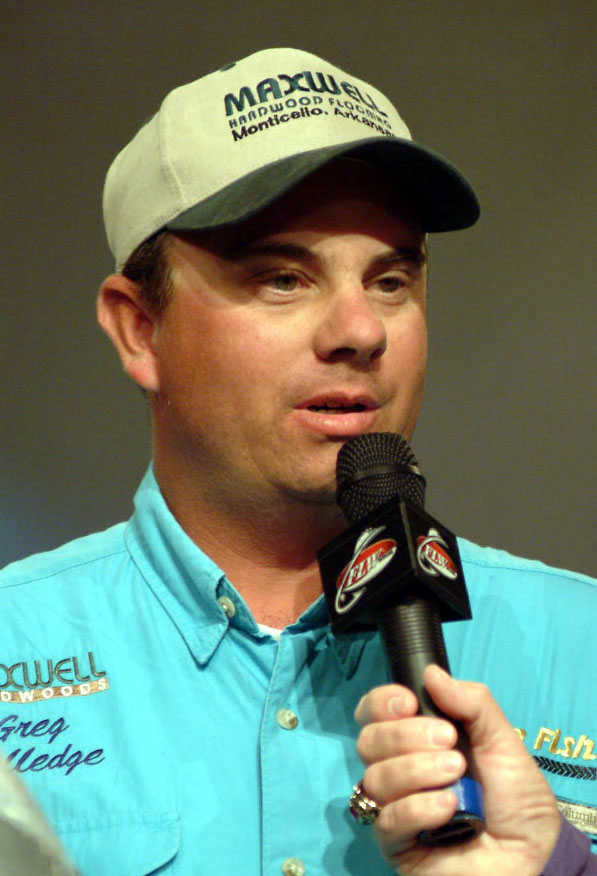 BIRMINGHAM, Ala. – Greg Gulledge of Monticello, Ark., can do no wrong. After taking a commanding lead in the Co-angler Division of the FLW Tour Championship on Logan Martin Lake on Wednesday, he went out today and added another five-bass limit weighing 10 pounds, 5 ounces for a two-day total of 26 pounds even.

He now temporarily enjoys more than a 7-pound lead over his competitors. But it won’t last long. The co-anglers weights will start at zero Friday morning and the co-angler with most weight will win $25,000.

“I fished with Luke Clausen today, and we fished the same kind of water I fished yesterday,” Gulledge said. “I’ve figured out something a little different than what my pro partners are doing, and I think there’s something to it. I had my limit today by 10 o’ clock.”

Gulledge says he is fishing a “little worm,” but he is hesitant to elaborate on the “something a little different” just yet.

“It’s kind of an amazing story,” he said of his technique. “We are staying over here in a lake house, and on Tuesday morning I walked down to the dock to test out few lures. Well, I got to playing around with a few things and I caught four bass off the dock, and I learned something from it.”

Perhaps if Gulledge wins the $25,000 in the Co-angler Division Friday, he will share the details of his technique.

“It’s been a great tournament so far, but tomorrow is the important day,” he added. “I want to win one of these things bad.”

T.R. Fuller of Auburn, Ala., added another limit weighing 8 pounds, 4 ounces to his total for a two-day total of 18 pounds, 11 ounces, which keeps him in second.

Fuller said he fished around docks all today and had to mix up his presentation to get keeper bites.

“I caught three on lizard, one on a Senko and one on a crankbait,” he reported.

Regarding the final day, he added, “The fun part is over; now it’s time to get serious.”

Simon Morrow of Alexander City, Ala., was happy just to be standing at the weigh-in this afternoon.

Morrow was involved in a car accident this morning that delayed him from fishing until 9 a.m.

Morrow’s accident was the result of another accident that had just occurred.

“I was driving down I-20 and saw headlights in my lane,” he recounted. “So I merged to the right and there was another car stopped in that lane. When I went to merge into the emergency lane on the right side of the road, there were people standing in it up against a guardrail. I had no where to go and a semi-truck clipped me from behind.”

Morrow was not hurt in the accident, but he missed the official takeoff.

His pro partner, Mickey Bruce of Buford, Ga., was paired with an observer and sent out to fish without Morrow.

Morrow finally arrived at the ramp shortly before 9 a.m and a boat was summoned to take him out to Bruce’s boat – but Morrow’s nightmarish morning was not over yet. The boat delivering him to Bruce then broke down.

Demonstrating the kind of professionalism found among FLW Tour pros, Bruce volunteered to give up fishing time to go back and pick up Morrow.

“When he pulled up to get me, Mickey jokingly said, `Get in my boat, good luck charm,’ Morrow continued. “And at the time, he did not have a fish.”

Then Morrow’s run of bad luck finally gave out.

“About the third cast of the morning I caught a 3-pounder,” he said. “Then Mickey and I both finished out limits in about two hours. It’s been a surreal day.”

For the record, Morrow checked in a limit weighing 10 pounds, 4 ounces giving him a two-day total of 17 pounds, 1 ounce for third place.

On a side note, Bruce went on to advance to the finals of the Pro Division.

Derek Moyer of Alexandria, Va., brought in a five fish limit for 6 pounds, 15 ounces, giving him a two-day total of 16 pounds, 2 ounces for fourth place.

“It worked again,” he said. “I fished with Glenn Browne and caught six keepers. I’ll stay with the Spotsticker tomorrow and hope for the best.

Lake Champlain co-angler champion Jason Knapp of Uniontown, Pa., made the comeback move of the day with the heaviest limit in the Co-angler Division: 12 pounds, 10 ounces. 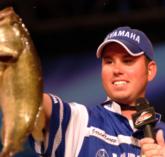 The heavy sack of fish moved Knapp from 34th to fifth with a two-day total of 15 pounds, 14 ounces.

“I just made a color switch today,” Knapp said. “Yesterday I fished a green pumpkin Mizmo tube, and today I used a black tube with red flake – the same color I won Champlain with.”

Knapp’s limit was anchored by a 6-pound, 2-ounce bass.

“That was my last bite of the day,” he added.

This house is a rockin’

If you need some good luck before your next fishing trip, you may want to stop by the lake house that co-angler Chris Koester of Winston Salem, N.C., rented for his co-angling buddies.

“We rented a big house on the lake, and everyone staying there made the top 24,” Koester said.

In the Co-angler Division there were 14 limits caught today and the top 24 cut rose to 9 pounds, 4 ounces.