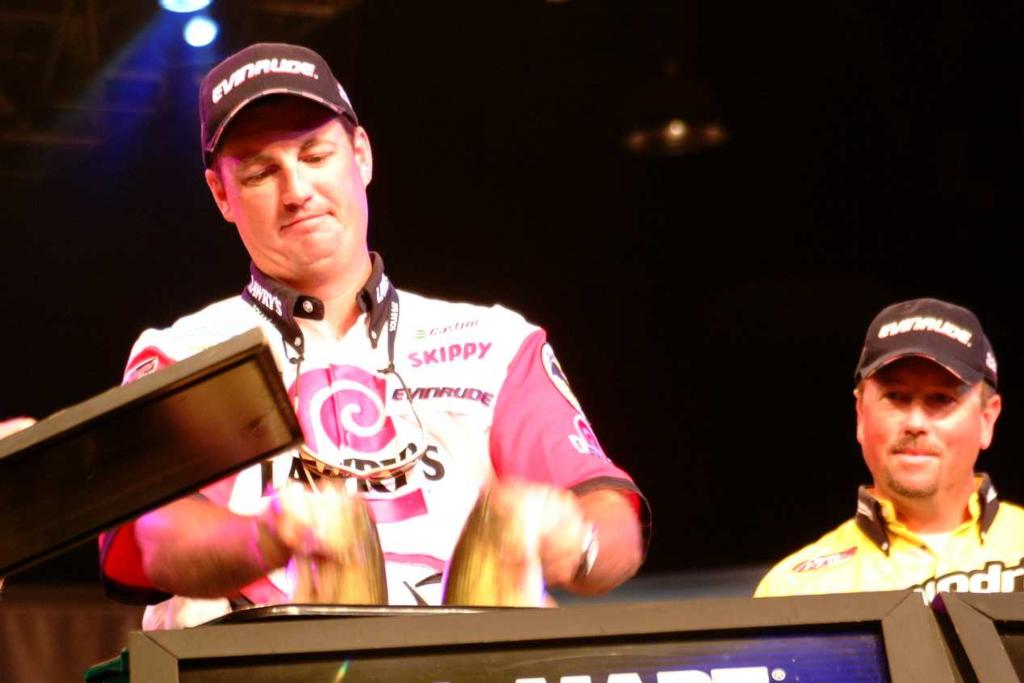 Sweet home, Alabama … A 1-pound, 2-ounce bracket victory for Satsuma, Ala., pro Jason Kilpatrick has kept hope alive among Alabaman bass-fishing fans that one of their own may still win the championship. Of the Bama boys who qualified for the 2004 championship, Greg Pugh and Birmingham’s own Todd Ary were the first to go, falling to Dave Lefebre and Greg Hackney, respectively, in their opening-round matchups. Ary’s loss was particularly tough for the hometown crowd to swallow as he matched Hackney’s weight only to lose in a tiebreaker. Matt Herren, who fell Friday to Jimmy Millsaps, said his familiarity with Logan Martin Lake actually worked against him today due to uncharacteristic water and air temperatures that hampered his favorite bass patterns. So Kilpatrick will carry the Alabama torch into Saturday’s final round.

Clausen’s march… After Friday’s semifinal weigh-in at the Birmingham-Jefferson Convention Complex, there was no doubt about who is on fish at the 2004 FLW Tour Championship: Luke Clausen. Whether Luke is using the Force to contribute to his bass-fishing bonanza is pure speculation, but the man is clearly channeling something that is working well. Clausen outfished all 48 pros in the opening round of the championship, reeling in a two-day total of 26 pounds, 3 ounces, and then he did it again today. His 14-3 sack was nearly 2 pounds heavier than the next-best pro’s: Kevin Vida‘s 12-6 catch of the day. But it was Clausen’s bracket opponent, of course, who had him worried at weigh-in. Hackney, ranked No. 2 on both the FLW Tour and in the BASS circuit, brought 9-5 to the scale, but kept Clausen guessing until the very last fish. After breathing a sigh of relief, Clausen said, “I was just scared I was going to be a victim of the `Hack Attack’ today.”

13 pounds from the back … Had it not been for the continuation of Clausen’s bassfest on Logan Martin, a co-angler would’ve shown up the two dozen pro finalists today. On Friday the 13th, Stephen Tosh Jr. netted an incredible 13-1 sack from the back of the boat, enough to earn the co-angler champion crown and $25,000 in cash. If Tosh is a superstitious man, he may have to find a new number to bear the weight of the “unlucky” label.

Z-Series gets an A … Gasps – and then applause – could be heard among the crowd as the revolutionary Ranger Z-Series Comanche boats were lowered from the rafters of the convention center after Friday’s championship weigh-in as part of the company’s highly anticipated model launch.

But one fishing fan literally had his breath taken away by the sleek new boat. There was nothing unlucky about Friday the 13th for Jeff McDaniel of Calera, Ala., who won the very first Z-Series Comanche ever off the assembly line. McDaniel said he was speechless for several moments right after his name was drawn. However, he later was able to say he was as happy as anyone could be to drive away from the weigh-in with a brand-new boat – especially a coveted Z-Series craft with the model No. 001. McDaniel said he will definitely keep the boat, with which he was thoroughly impressed, for fishing. Editor’s Note: Full stories on the Z-Series launch as well as Ranger Boat giveaway winners will be published at FLWOutdoors.com Saturday.

50: Percentage of pros who outfished higher-seeded competitors to advance to Saturday’s finals.

23: Number of pros, out of 24 total, that co-angler champion Tosh outfished today with his 13-1 sack.

7: Number of pros ranked in the top 10 to compete in Friday’s semifinals.

1: Number of pros ranked in the top 10 to advance to the finals. Clark Wendlandt, the No. 4 seed, will compete Saturday.

“All of our co-anglers are marketing majors.”

– FLW Tour weigh-in host Charlie Evans, commenting on co-angler Troy Cox‘s story about having fishing rods broken as they were being shipped to him here at the FLW Championship. Cox managed to slip in a few words about his family’s bait company, Mizmo.

“See that eye there? It’s too close to the tail.”

“I’m out of fish, and I don’t know what to do tomorrow. I guess I’ll just go fishing.”

– Kilpatrick, describing his plight en route to battling among the final 12 for a half-million dollars. However, he said he fished on instinct Friday, which got him an 8-13 sack and advancement, so perhaps his situation is not as dire as it sounds.

“I don’t have big plans or aspirations … I just want to survive as a bass fisherman.”

– Co-angler champion Tosh, regarding his plans for approaching the FLW Tour as a pro in 2005. Tosh’s victory Friday marked his second FLW win as a co-angler in his rookie year on tour, his first having been at Kentucky Lake. With the skill he has shown from the back of the boat in 2004, it’s probably a safe bet that Tosh will do much more than merely survive.