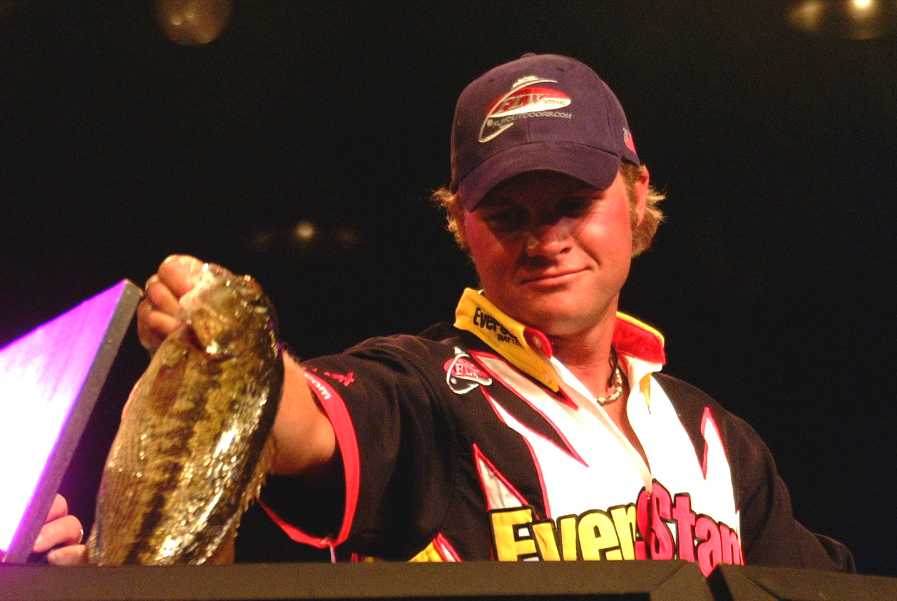 BIRMINGHAM, Ala. – Under almost any other circumstances, at almost any other fishing tournament, Luke Clausen would probably feel pretty good about himself right now. After all, he just caught another limit worth more than 14 pounds and led all pros in total weight for the third day in a row at the Wal-Mart FLW Tour Championship.

But this is competitive fishing bracket-style, and Clausen’s 40 pounds, 6 ounces of bass caught thus far won’t mean squat when he hits Logan Martin Lake Saturday in search of the $500,000 prize. All weights are reset to zero for tomorrow’s 12-man shootout for the title.

“Man, it really makes me wish this was a cumulative-weight tournament,” Clausen said Friday after catching the heaviest limit of the semifinal round – 14 pounds, 3 ounces – to beat Greg Hackney of Gonzales, La., and advancing to Saturday’s finals. With his second limit over 14 pounds in three days, Clausen has caught the most bass two out of the first three days of the championship.

Tournament-fishing traditionalists can probably sympathize with Clausen’s lament, but remember this: Before there were brackets, there was no fishing for a half-million dollars. Another perspective, to use a hypothetical NCAA basketball analogy, is that it doesn’t matter if Duke scores 140 points per game from the Round of 64 all the way to the Final Four; they’re only as good as the last team they beat until after the tournament’s final game.

Clausen seems to understand this. He didn’t set out to catch the heaviest limit again Friday. Instead, his clearly stated goal was to beat Hackney, who was arguably the most consistent heavy hitter on the pro circuit in 2004. That, by definition, meant he had to catch a lot of bass.

“You’re probably going to hear a lot about him from me on the (TV) tape,” Clausen said. “I was just scared that I was going to be a victim of the Hack Attack today. He can catch a huge sack on any day.”

The Hack didn’t attack Friday, catching a smaller limit worth 9 pounds, 5 ounces. But he did mentally victimize Clausen a little bit by exaggerating his day’s catch both before and during weigh-in – much like he did to Todd Ary in the opening round, except in reverse.

Clausen is an FLW rookie, which makes his run this week that much more impressive. The Spokane, Wash., pro is no greenhorn, however, having won scores of tournaments in the West prior to this year’s FLW season.

What is remarkable, though, is that this is Clausen’s first trip ever to Logan Martin Lake. The guy’s never seen the place before, and he’s fishing it like he owns it.

“I caught all of my fish off of new water today,” said Clausen, whose biggest bass of the day weighed around 3 1/2 pounds. “I only had three fish by 11 o’clock, but I ended up with about 20 keepers. I didn’t catch many little ones, just a lot of 2-pounders. I’m really excited about how I did the first three days, but I don’t really know if it will hold up tomorrow.”

While he did admit that he caught a few fish throwing finesse worms around docks, all week the rookie Clausen has taken a decidedly old-school approach to describing his winning technique: He’s revealing nothing.

“Can’t I tell you tomorrow?” he responded when asked what’s working for him.

In a tournament this high-stakes, Clausen is probably right. Sometimes nothing can be a real cool hand. 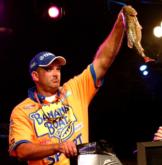 One pro who’s not shy about revealing his secrets is Kevin Vida of Clare, Mich., who caught the day’s second-heaviest limit – 12 pounds, 6 ounces – to defeat Tracy Adams of Wilkesboro, N.C., (8-10) in semifinals.

“I went down(river) to the dirty water and caught a small limit, then I went looking for bigger fish,” Vida said. “The fish just got bigger and bigger as the day went on. I was just running and fishing a pattern.”

Like Clausen, Vida’s been a force all week running his pattern. He said he’s caught all of his fish on just two jigs: one a white, ¼-ounce Hildebrandt jig and the other a green-pumpkin, 3/8-ounce Berkley jig.

Like many semifinalists dealing with the cooler, sunnier weather Friday, Anthony Gagliardi of Prosperity, S.C., found the bite to be a little “off.” Nevertheless, he caught six keepers and culled out to the third best limit of the day – 12 pounds, 3 ounces – and defeated Dean Rojas of Grand Saline, Texas, (9-6) to advance to the finals. In the opening round, he topped Randy Blaukat of Lamar, Mo., in a tough heavyweight showdown.

“So far, all of my fish the first three days have come from pretty much the same places,” said Gagliardi, an FLW winner earlier this season at Kentucky Lake. “I have some places that I didn’t visit today. I figured, if he beats me with 13 pounds, then he beats me. I took my chances and saved my best fish for tomorrow. But, regardless of what happens tomorrow, I’m proud of myself. I beat two really tough fisherman to get this far.”

Logan Martin proved itself to be a great leveler again Friday, serving up a few more closely fought matchups like in the opening round.

“I’m scared to death,” Martin said. “But if I can figure out how to catch a good bag of fish tomorrow, I’ll feel pretty confident.”

After surviving big weights by Castaic, California’s Aaron Martens in the opening round, Mickey Bruce of Buford, Ga., caught them again and ended the amazing season of FLW Angler of the Year Shinichi Fukae of Osaka, Japan. Bruce caught 11 pounds, 4 ounces and Fukae landed 10-2.

Glenn Browne of Ocala, Fla., squeezed by Mark Hardin of Canton, Ga., by just a half pound. Browne caught 9-8 and Hardin had 9-0.

It’s hard to call two-time FLW AOY Clark Wendlandt of Cedar Park, Texas, a “lightweight” with a straight face, but that’s exactly what he has been this week. He advanced to the half-million-dollar finals with a catch weighing just 5 pounds, 8 ounces Friday, defeating Shawnee, Kansas’ Brent Chapman’s 4-7. Wendlandt’s catch was the lightest qualifying weight for the finals, and he has averaged just under 7 pounds of fish the first three days to make it this far.

“Hey, all I’ve got to do is make it to tomorrow,” he said. “I’ve said all along that this is a tournament of adjustments. Hopefully, I can make the right adjustments tomorrow. You just never know in this format.”

Jimmy Millsaps of Canton, Ga., beat local favorite Matt Herren of Trussville, Ala., by a weight of 7 pounds, 12 ounces to 3-15.

The rest of the 2004 championship final-round field will consist of Jason Kilpatrick of Satsuma, Ala. – who beat David Walker of Sevierville, Tenn., by a weight of 8 pounds, 13 ounces to 7-11 – and Charlie Ingram of Sante Fe, Tenn., who defeated Andy Morgan of Dayton, Tenn., 8-13 to 6-0.

For all the marbles

The entire 2004 FLW season has been boiled down to this: 12 pro anglers vying against each other for the $500,000 winner’s check. All weights will be reset to zero for Saturday’s final round as the field competes in a one-day shootout to determine the champion. Heaviest sack of bass wins.