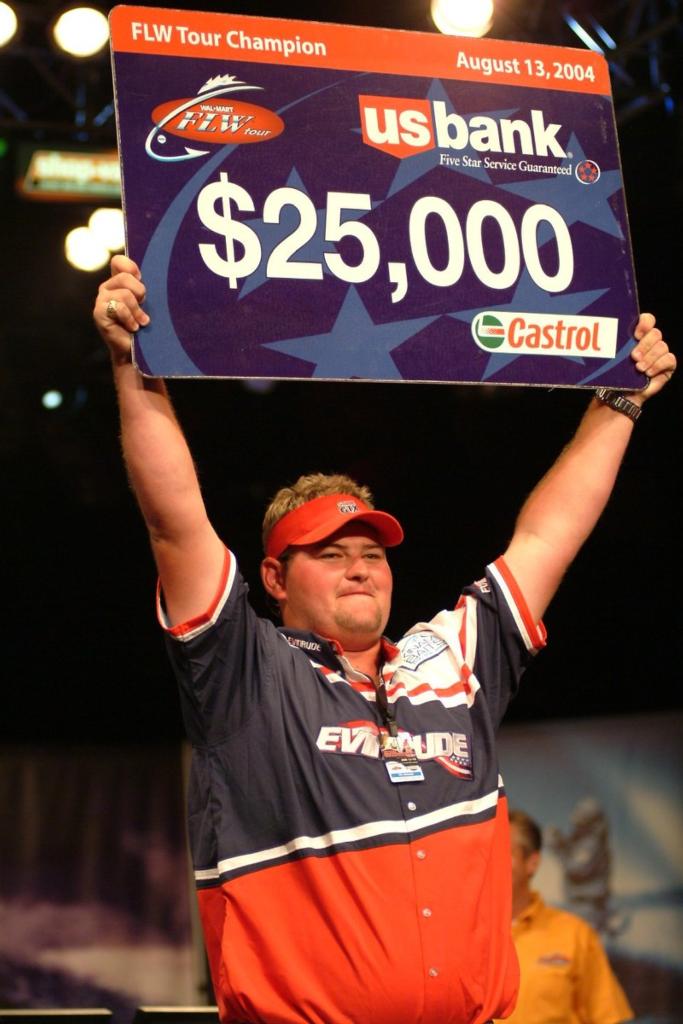 BIRMINGHAM, Ala. – If Stephen Tosh Jr. of Waterford, Calif., ever boards your boat with a drop-shot rig, watch out.

This 24-year-old from the West Coast has been well trained in the fine art of finesse fishing, and he has put on a drop-shot clinic from the back deck all year long on the FLW Tour.

“I think the whole key today was shortening the leader on my drop-shot rig,” he said after weighing in 13 pounds, 1 ounce for the win. “I’d been using a 12- to 18-inch leader, but today I shortened it to 2 to 5 inches and caught about 25 keepers.”

Tosh fished with deep-water ace Mickey Bruce of Buford, Ga., and used the drop-shot in 14- to 20-foot depths.

“I was using a Kinami cut-tail worm in mad melon and Bud’s melon colors,” Tosh reported. “I used 6-pound-test line with 3/8- and 1/2-ounce weights. I had to go to heavier weights for better feel in the wind.”

“I only caught one fish with Wesley, but I had a limit with Randy by fishing the Kinami cut-tail on a darter head around docks,” he said.

It doesn’t look like Tosh will be fishing from the back deck much longer, however. Since he finished third in the co-angler points this season, he will accept his invitation to fish on the pro side next year.

“Bass fishing is all I’ve ever wanted to do,” he said. “I’m not looking to be the next icon of the sport, I just want to make a living doing this, and the time is right, thanks to FLW Outdoors. I mean look around here – somebody is going to win $500,000 tomorrow. It’s just amazing how far this sport has come.”

Caldwell fished with Tyson pro John Crews of Jetersville, Va., and had to alternate between a Carolina-rigged Zoom Baby Brush Hog in green pumpkin and a Texas-rigged creature bait by Net Baits called a Baby Action Cat, also in green pumpkin.

“When John was fishing offshore, I would cast the Carolina rig,” Caldwell said. “And when he moved up shallow around docks, I’d fish the Baby Cat.”

Mulleins used a watermelon candy finesse worm on a 1/16-ounce jighead fished on 8-pound-test line to catch his four keepers.

“I didn’t get any hits until I started dipping the tail of the worm chartreuse, and that made all the difference,” Mulleins said. “Once I did that, I started getting hits left and right, but a lot of them were nonkeepers.”

“I used the same bait all week,” Jones said. “I mostly flipped it under and around docks.”

A sure sign that more Japanese anglers are waiting in the wings in hopes of following Shin Fukae’s phenomenal success, Michi Oba of Tokyo, Japan, finished fifth with 7 pounds, 9 ounces.

Oba discovered a strange pattern late in the afternoon and quickly capitalized on it to catch five keepers.

“I started throwing a big 3/4-ounce spinnerbait and burning it on the surface around docks,” Oba said. “The fish would come out and get it. I wish I had discovered it earlier in the day, I might have gotten some bigger bites.”

Co-angler of the Year honored

During the co-angler weigh-in, the 2004 FLW Tour Co-angler of the Year trophy was awarded to Keith Pace of Monticello, Ark.

In addition to winning the year-long points race with 1,050 points, Pace’s season also included three top tens and $16,050 in winnings.

The title will earn him the option of switching to the pro side next year.

“I think I’m going to do it,” Pace said. “I might as well go ahead and give the pro side a try while I’m young, otherwise I’ll regret it.”